The Old Man & the Gun

David Lowery’s “The Old Man & the Gun” is as deceptive as its protagonist. It tells the story of a man so likable and gentlemanly that tellers and bank managers practically handed him their money as he went about one of the most infamous robbery sprees in American history. But however suave the movie itself may be, it's another accomplished piece of work from a filmmaker who is now four for four, and continues to surprise with the range of his interests and output. And it’s a love letter to a cinematic legend, serving as a perfect final film for someone who long ago surpassed mere actor status to become an icon.

Of course, that legend is Robert Redford, who has stated that “The Old Man & the Gun” is his final film. Flashing his smile and allowing his eyes to twinkle in ways he hasn’t in years, Redford leans into this part as a natural extension of some of his most beloved characters. When he says he’s never ridden a horse before, the line plays like a joke because we can all picture the Sundance Kid atop his steed.

Here, he plays Forrest Tucker, a lifelong criminal who has been incarcerated 18 times, starting as early as 15, and escaped from most of the prisons that tried to hold him (there's a montage of the escapes that's an absolute delight and even uses some classic Redford film footage). We meet him near the end of his criminal career, as he’s settled into a groove as what could be called a gentleman bank robber. With two buddies who will be known as the Over the Hill Gang (Danny Glover & Tom Waits), Forrest robs banks with a casual opening of his jacket to reveal a gun and kind words for his victims. He tells one teller who starts to cry that she’s doing a great job. He’s encouraging, and it’s essential that he relies on his charm as much as firepower. Lowery never even shows us the gun when Forrest opens his jacket, staying on a face-and-shoulders shot. Those blue eyes and that smile are the real weapons.

The final days of the Over the Hill Gang are framed by two supporting characters. First, there’s Jewel (Sissy Spacek), who Forrest meets as her car has broken down on the side of the road—looking in her trunk serves as good cover as the cops chasing Tucker speed by. Forrest takes a liking to Jewel, even telling her what he does, but she doesn’t believe him. The two often sit in a diner or on Jewel’s large property and the result is cinematic magic. There’s something in these scenes between Redford and Spacek that’s impossible to recreate with any other actors, and Lowery knows it. He leans into the magic of the moment, realizing that he’s there to really capture something timeless and at least somewhat beyond his control. I could watch the two of them just laugh and talk for hours—they make something almost intangible look so effortless.

Second, there’s John Hunt (Casey Affleck), who becomes the lead cop in trying to capture Forrest. He’s the first one to figure there’s even a crime spree taking place. The Over the Hill Gang robs banks in different states and it’s usually small takes. Hunt tracks them down and becomes the Pacino character to Redford’s De Niro one in the “Old 'Heat'” analogy. Affleck is great too, almost impressed by Forrest’s chutzpah as Hunt has just crossed the big 4-0 himself and he too is fascinated by someone who doesn’t just want to “make a living,” he wants to really live. Tucker doesn’t do it for the money. He does it because he’s restless and good at it.

Lowery and his team, especially cinematographer Joe Anderson and composer Daniel Hart, give “The Old Man & the Gun” a very period-heavy feel. It’s a movie that doesn’t just take place in a different era—the true story unfolds, mostly, in 1981—but feels like it was made in a different era too. The film stock, the music choices, the cinematic language—it’s all very different from what we’re accustomed to in 2018, enhancing the magical, timeless aspect of the entire project. It's as cheesy as it sounds but this is one of those movies for which the phrase "they don't make 'em like that any more" was invented.

After all, this is a story about a legend in his own mind, someone who clearly wanted his life to be told in stories on porches with beers in hands, so its teller should embrace that aesthetic. And so Lowery enhances the charming outlaw attitude of it all, resulting in a movie that’s so light on its feet that some people will think it just floats away. At first, it might. But, make no mistake, you’ll think about this film. It'll be a line of dialogue, or an image of Redford’s charm or Spacek’s laugh or Affleck’s attitude—it’s just one of those movies that keeps sneaking up on you in memory. Like Forrest himself, it refuses to go away. And like Redford himself, it’s unforgettable.

This review was originally filed from the Toronto International Film Festival on September 10, 2018. 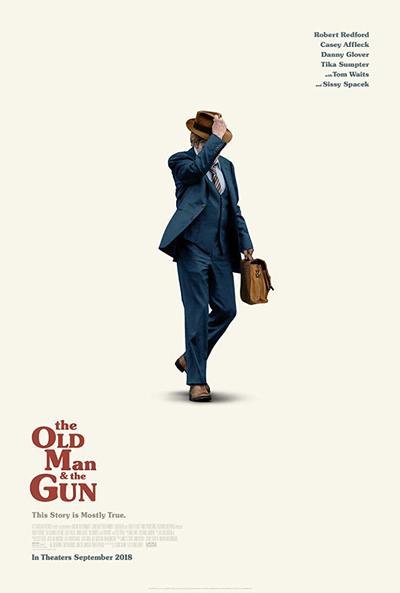