“Fire Island” tips its homage-wielding hand early with a verbal and visual shout-out to Pride and Prejudice. After a quick appearance by that novel, narrator Noah (Joel Kim Booster) quotes its author, Jane Austen, then dismisses her lines as a heteronormative ode to marriage and monogamy. Noah has no time for any of that nonsense; he’s late for the boat to the titular gay mecca, where he will join his friends at the house of their lesbian den mother, Erin (Margaret Cho). “Get on the boat, bitch!” yells Howie (Bowen Yang), the friend whom Noah, in a nod to the teenage sex comedies of my adolescence, will try to help get laid during this excursion. This is one of the many dramas—small and capital D varieties—that populate this entertaining and heartfelt romantic comedy.

“No fatties, no femmes, and no Asians,” someone says, describing a mantra seen in some gay spaces. I’m glad someone mentions it, and that the film ruminates on the real and perceived shallow optics inherent in that statement. When I went to Fire Island for the first time over 25 years ago, no fewer than eight people stopped to explicitly tell me I was too fat to be there. And this was my twentysomething, in shape, muscular body. If I dared venture there in my current 52-year-old dad bod condition, the island would sink itself in the Atlantic before I got there. I over-exaggerate, to be sure, but it may explain why my interest gravitated toward Howie’s insecurities. Those familiar with the brash characters Yang portrayed on "Saturday Night Live" will find a more subdued, introspective performance here, one that doesn’t scrimp on the sharp quips yet grounds them in a sincere longing for romance. It’s excellent work that earns the hilarious and grandiose gesture the film gifts Howie with during the climax.

Much of Yang’s expected brashness is transplanted to Noah. He’s physically built, unapologetically slutty, and the de facto leader of the multiethnic crew that includes the raunchy, boisterous duo of Luke (Matt Rogers) and Keegan (Tomás Matos), and the playfully judgmental Black intellectual Max (Torian Miller). “Represent!” I yelled at my computer screen upon seeing Max’s thick bod. Unfortunately, he gets far less screen time than the more stereotypically bodied men with their speedos and their six-packs, as if the film is hiding him. Despite that, “Fire Island” is a refreshing, racially balanced corrective to the usual queer romcoms. They are often ten times worse than straight romcoms and feature endless clones of slightly-bearded White men who look like the cast of the Doonesbury comic strip relocated to Williamsburg, Brooklyn.

Kim Booster, who also wrote the sharp and funny screenplay, fleshes out several Asian queer characters, juggling issues such as racial fetishism with the class conflicts that populated the novels of his source material’s era. Noah and his crew save their pennies for this once-a-year event, which is partially made possible by the house Erin bought after winning a personal injury lawsuit. By comparison, the romantic interests are far richer, and the house they have makes Erin’s comfortably lived in one look like a tin roof shack. “Fire Island” gets a hilarious running joke out of the “doorman” who greets Noah and his crew every time they visit the ritzy abode. “Can I help you?” he asks haughtily, as if he’s never seen them before. More than one snooty guest tries to guess the ethnicity of Howie and Noah, with one going so far down the fetishism scale that he is covered with anime tattoos.

Noah may care deeply for his chosen family, but Kim Booster doesn’t shy away from his character’s fear of being vulnerable nor his desire to override a friend’s wishes because he thinks he knows best. His meddling in Howie’s budding relationship with Charlie (James Scully), the goofy doctor who satisfies the Meet Cute quotient, ultimately threatens his closest friendship. Howie wants to take things slowly, but Noah keeps twisting his arm to get laid, primarily because Noah made a misguided agreement to abstain from sex until Howie gets some. You can feel Austen’s heroines throwing shade but also nodding with approval at all that meddling.

Doctor Charlie has a watchdog of sorts, a stern, rich lawyer named Will (Conrad Ricamora). He is like this film’s Mr. Darcy equivalent. Will thinks the on-the-rebound Charlie is naïve and prone to being taken advantage of, and sees the harmless Howie as a major threat. Of course, standard romcom wisdom dictates that Will and Noah will float from intense antagonism to swoony romance, complete with rain-soaked confessions and tentative gestures of affection. This plays out with the requisite obstacles like the return of Charlie’s racist ex-boyfriend, for whom he still carries a torch, and the financial status of Erin who, now broke, will have to sell her house and end the gang’s yearly get-togethers.

Director Andrew Ahn proficiently handles the numerous plot lines, character conflicts, and the tonal shifts between raunch and sweetness. He’s assisted by cinematographer Felipe Vara de Rey, who makes Fire Island look like a glossy, nostalgic remnant embedded in the memories of everyone who ever had a good time there. And to be sure, this film is ultimately about memories and good times with the chosen families so many queer people created in lieu of the blood relatives who deserted us when we came out. It’s also about characters the viewer wants to see get together, the only thing necessary for a romantic comedy to work. It’s to Ahn and Kim Booster’s credit that they don’t overcomplicate things as so many films of this genre have done.

Near the end of “Fire Island,” Noah asks Will a question you don’t hear too often in romcoms: “What do you want?” Will’s answer is a testament to how effectively this film wears its heart on its sweaty, sticky sleeve. It sells sincerity with the same surefootedness it sells the killer oral sex joke that may be worth a viewing alone. 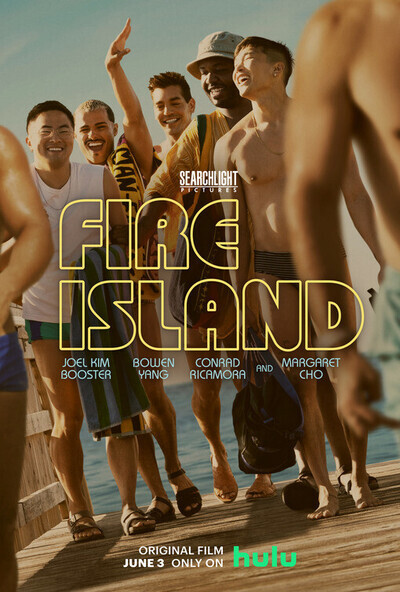 Rated R for strong sexual content, language throughout, drug use and some nudity.

Conrad Ricamora as Will