Various characters populate “Person to Person,” but they rarely register as actual people. And while some of their storylines intersect throughout the course of a day in New York, they rarely connect in ways that have actual meaning.

So what’s left? A solid cast whose talents mostly go to waste and a movie that meanders from one moment to the next without much momentum. But if you’re in the mood for something shaggy and loose that won’t challenge you too much, maybe you’ll enjoy writer/director Dustin Guy Defa’s affectionate and sporadically sweet indie. It’s got a low-key rhythm that might provide a pleasing alternative to the noisy spectacle of summer blockbusters. Or it might just seem pointless.

At times, “Person to Person” recalls of Richard Linklater’s groundbreaking 1991 film “Slacker,” in that it ambles amiably between oddballs over an ordinary afternoon. And Defa is definitely going for a ‘70s vibe here; besides shooting on grainy 16mm, his penchant for zooms and nostalgia for vinyl, bicycles, newspapers and antique watches give the movie an overall throwback quality. But such comparisons only make you long for characters that are more sharply drawn and dialogue that’s more vivid.

The chief through line of “Person to Person” features Bene Coopersmith, who also starred in Defa’s 2014 short film which inspired the feature, as a record aficionado pursuing a rare Charlie Parker album and pondering whether to tell his girlfriend how he really feels about her. Coopersmith owns a Brooklyn record store in real life, and his presence gives the movie a consistent feeling of authenticity. His character, also named Bene, asks everyone he sees that day whether they like his new shirt: a flowery purple button-down that’s way outside his comfort zone. It’s one of the movie’s many self-conscious quirks.

Then there’s Michael Cera as an investigative reporter running around town with his new trainee (Abbi Jacobson). (How quaint is that? Working journalists!) It’s her first day on the job, and Cera’s nerdy Phil makes Jacobson’s mousy Claire stalk and shout questions at the widow of a man who died suspiciously. As the bereaved wife, Michaela Watkins gets little more to do than vamp around town in oversized sunglasses; she’s like a femme fatale who’s stumbled in from a broader comedy. Meanwhile, Phil strains to bond with Claire by blaring tunes for her from his terrible metal band. It’s yet another quirk.

The great Philip Baker Hall brings an understated grace to his brief screen time as a longtime watch repairman; he happens to have the timepiece the dead man was wearing when his body was found, which makes it of great interest to Phil and Claire. But he’d rather just hang out in his quiet shop all day, listening as his garrulous buddy (a charismatic Isiah Whitlock Jr.) tells tall tales.

Teen tastemaker-turned-actress Tavi Gevinson anchors yet another storyline as a hyperverbal high school student who ditches class with her best friend (Olivia Luccardi), only to be stuck doing nothing while the pal makes out with her idiot boyfriend. “I detest the way you detest people,” Luccardi’s Melanie says. “I know,” Gevinson’s Wendy responds, “and I love you for that.” Gevinson has a directness that’s appealing.

And in the least developed (and least amusing) section of all, Bene’s roommate, Ray (George Sample III), tries to atone for posting a sex tape of his girlfriend online in a fit of revenge. Weirdly, the movie asks us to sympathize with him for this transgression. It also asks us to accept that he doesn’t understand how the Internet works, which seems strange given his youth, although it is consistent with the movie’s prevailing analog tone.

The one theme that unites these disparate strands is that their characters have difficulty connecting with each other. There’s often a stiffness to the way they regard each other, or perhaps they’ll have stilted exchanges about hometowns or donuts in an effort to make small talk. Trouble is, audiences might struggle to make a genuine emotional connection with “Person to Person” themselves. 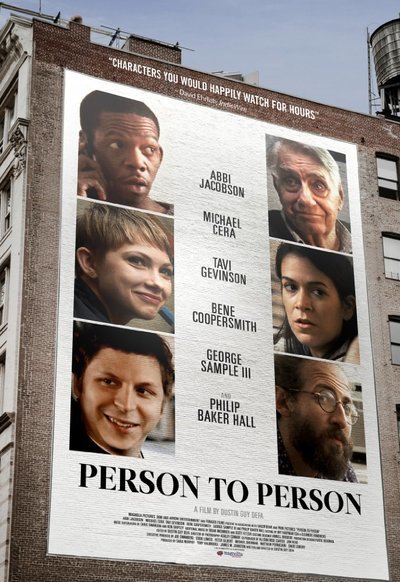