In the last decade French star Catherine Deneuve has formed a strong partnership with actress-director Emmanuelle Bercot, starring in three of the director’s four feature films. In each, Deneuve finds herself in caretaker roles. In the best of the three, “On My Way,” her unique brand of spunkiness and enduring allure is in full force. Unfortunately, their latest collaboration, the César-winning drama “Peaceful” (“De son vivant,” or “In His Lifetime” in the original French) is a plodding drama that traps her in a one-dimensional grieving mother role.

Deneuve plays Crystal, a worried mother navigating the terminal cancer diagnosis of her grown son Benjamin (Benoît Magimel). Over the course of four seasons, as Benjamin’s condition deteriorates, Crystal faces the knowledge that she will outlive her own son and what that means for the future. While this angle could have been a more compelling aspect for the film’s focus, it’s played out mostly on the periphery of what becomes an overstuffed ensemble orbiting around Benjamin.

Segmented by these seasons, the film's first three parts each begin with the oncology department of the hospital exchanging stories of patients and their families, sharing their emotional responses, and receiving advice from the department’s head Dr. Eddé (Gabriel Sara) before joyfully singing “Lean On Me” in English. Eddé believes in compassionate, empathy-based treatment of patients. He wears ties of his patient's favorite animals. He believes crying with them is okay. Sara’s warm performance is the most natural in the film, which clashes with the more overly dramatic tenor of the other performers. Every time he leaves the narrative, his lack is deeply felt.

As Benjamin, a “failed actor” turned acting teacher facing his own mortality, Magimel won the César award for Best Actor. He is certainly doing the most acting in the film as he goes through all the stages of grief (denial, anger, bargaining, depression, acceptance) after his diagnosis of Stage IV pancreatic cancer. In going through them, Bercot and co-writer Marcia Romano never miss a moment to remind us that this man is an artist, who feels things deeply.

Benjamin's acting class is used to contrast his denial of his impending death against the importance of being in the moment as an actor. It’s a heavy-handed metaphor in and of itself, but also is done no favors by the very nature of these classes. Acting classes are awkward and uncomfortable, designed to push the performers out of their comfort zones and into a state of natural being. However, they’re also uncomfortable to watch because you see the process and the work. By seeing the work in the class, it’s hard not to also see the work Magimel is doing in his dramatic scenes with Deneuve.

Later on, after he has shared his diagnosis with his class, one of his female students visits, performing an impassioned, tearful monologue as he lay in a hospital bed. When he laments that he’s made no one happy, one of his doctors, Eugénie (Cécile de France), comments that’s not what she saw earlier. He then remarks that the student merely has a crush on her teacher. Benjamin’s summing up of his life and his perceived failures in this scene is meant to be profound, but the dialogue is just as clichéd as his student’s crush.

De France’s talents are wasted by these hackneyed moments with Benjamin. As Dr. Eddé’s right hand, Eugénie mostly observes the patients and aids him assuring them they are receiving the best care they can. Eugénie and Benjamin share charged glances throughout the film until a climatic, and frankly unintentionally cheesy, consummation scene that does not resonate on the deeply emotional level Bercot intends.

Meanwhile, Melissa George has about two scenes as the mother of Benjamin’s son (a bland Oscar Morgan), whom Crystal pushed away before the birth. She’s only allowed to express either unbridled anger or smothering mother’s love. Who is she besides a mother? For that matter, who is Crystal besides a mother? Bercot and Romano don’t seem to care, as both characters only exist in relation to who they are for Benjamin.

The failure of this film is particularly disappointing when looked at in the scope of Deneuve’s recent roles. She is indeed mostly playing grandmothers at this point in her career, but even in Bercot’s own film “On My Way” she has a personality and a life outside of being a mother and grandmother. In other recent movies like Martin Provost’s “The Midwife” or Hirokazu Kore-eda’s “The Truth” she plays older women with complex creative and professional lives beyond their family, even if the stories focus on family. While her diminished amount of screentime may be due to a stroke she had which halted production for quite some time, it doesn’t explain how underdeveloped the role is.

Bercot’s overall direction and treacly screenplay don’t help matters. The four-season structure is interesting, especially by having the end come in the Spring. But it would be stronger if she had delved deeper into contradictions between death as an ending and Spring as a time of renewal. Her over reliance on Éric Neveux’s generic string-filled score does nothing to elevate the material from the many maudlin cancer dramas that have come before it.

While the filmmakers certainly have their heart in the right place, aside from maybe a plea for more compassionate medical professionals, nothing about “Peaceful” is very original or even entertaining. As it slogged towards its—and Benjamin’s—inevitable end, I felt like Elaine from that episode of “Seinfeld” where she’s dragged against her will to see “The English Patient,” screaming to screen, “Just die already!” 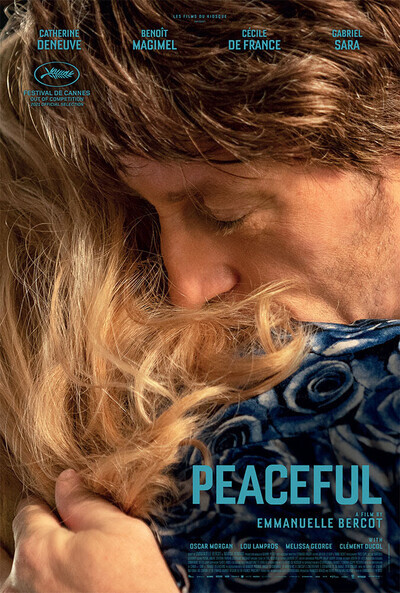