Martin Provost’s character drama “The Midwife” stars esteemed French actresses Catherine Deneuve and Catherine Frot in their first on-screen appearance together. Deneuve has frequently dominated the international film circuit since her breakthrough performance in Jacques Demy’s “The Umbrellas of Cherbourg,” working with acclaimed directors like Francois Truffaut, Andre Téchiné, and Roman Polanski. In 1980, Frot made her film debut in Alain Resnais’ “My American Uncle” and has since been nominated for ten César awards, most recently winning Best Actress in 2016 for her role as the title character in “Marguerite.” In “The Midwife,” Provost deliberately positions Deneuve and Frot as two titans of French cinema, tenderly squaring off as the former teaches the other about that hoary old cliché of living life to the fullest.

Frot plays Claire, a dedicated midwife who works in a soon-to-be-shuttered maternity clinic. She excels at her job and doesn’t want to cede her own expertise to the impersonal, technology-driven hospital that’s supposedly the way of the future. She has a son (Quentin Dolmaire, of recent “My Golden Days” fame) who wants to give up medical school and follow in his mother’s footsteps. She generally lives her life at a remove, complete with a sober daily routine and a civil expression.

Enter Beatrice (Deneuve), a free spirit and former mistress of Claire’s deceased father. After being diagnosed with a cancerous brain tumor, she returns to Paris to make amends, but when she learns she’s too late she decides to pay her Karmic debt to Claire instead. Claire initially wants nothing to do with Beatrice because she still holds a grudge against her for abandoning her father. Of course this being a movie, the two eventually become close almost as soon as they start caring for each other.

Though Deneuve and Frot excel as contrasts in behavior—reckless vs. cautious, spontaneous vs. staid—credit goes to Provost for crafting a film that espouses a trite message in a somewhat unpredictable manner. Provost and DP Yves Cape (“Holy Motors” and “White Material”) shoot “The Midwife” in an observational, realist mode, akin to work by the Dardenne brothers, imbuing the melodrama with a grounding force that aids the script’s emotional core. Moreover, Provost’s script doesn’t spoon-feed characterization nor plot to its audience, especially in the first half, but instead has a vested interest in simply watching subjects develop organically, which ultimately supports the late emotional climaxes. However, “The Midwife’s” best quality is its gentle, affectionate tone, an implicit respect for the women and their own emotional journeys without an ounce of pity or condescension.

“The Midwife” eventually devolves into a blandly sentimental register in its second half, which prominently features two mediocre subplots: the cute, but dull romance featuring Olivier Gourmet (“The Son”) and a half-hearted critique of techno-capitalism in the medical field. The latter especially suffers from underdevelopment as Provost only picks up the thread haphazardly, a shame given that some of the best scenes in the film are of Claire simply doing her job in the maternity clinic. Provost presumably wanted to connect Claire’s unmoored personal life with her rapidly changing professional life, but the link on display is tenuous at best. Generally speaking, Provost introduces many ideas in the film’s first half only to elide them later on. Sometimes this is effective, as it provides “The Midwife” with a snapshot-esque structure, but other times it gives the film an undercooked quality.

Yet, “The Midwife” brightens whenever Deneuve and Frot take center stage. Deneuve has the more showy role as the uninhibited Beatrice, a woman who still drinks, smokes, and eats like there’s no tomorrow because there might not actually be one for her. She’s fantastic, but Frot deserves acclaim for her own restrained performance; it’s a treat to watch her convey anger, disappointment, and bemusement in a single reaction. The two have palpable chemistry and fall right into their reversed mother-daughter dynamic (the younger Claire takes care of the older, more childish Beatrice), and while there’s plenty of wisdom about living in the moment and enjoying life, Provost and the Catherines dole it out subtly and without any mawkish aftertaste. For that alone, “The Midwife” deserves some admiration. 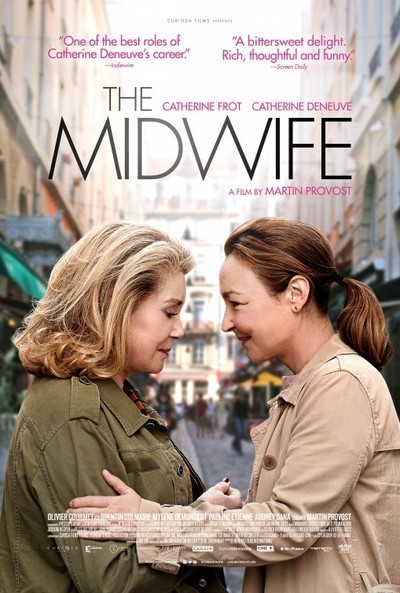