Nicolas Cage is often accused of taking parts that don’t challenge his undeniable range, especially in recent years as the "paycheck parts" have piled up. His ‘10s output of films like “Rage,” “Outcast,” “Stolen,” “The Frozen Ground” and “Left Behind” make this argument of creative coasting harder to dismiss (and almost more painful considering Cage delivered one of his career-best turns in the middle of this garbage onslaught with “Joe”). Looking over Cage’s resume, I considered the following phrase carefully: “Pay the Ghost,” out in very limited release today, is a new low for Nicolas Cage. Just when you thought he couldn’t get any more apathetic about a role, he pops up in this lazy, boring retread of “Insidious” that even his most diehard fans should ignore.

Based on a novella by Tim Lebbon, “Pay the Ghost” stars Cage as Mike Lawford, an English teacher who drops references to Lovecraft and Johann Wolfgang von Goethe just so you get the impression that Dan Kay’s screenplay comes with great literary aspirations. (Spoiler: It does not.) Lawford is married to Kristen (Sarah Wayne Callies), and the two have a child named Charlie (Jack Fulton). Of course, Mike is a distant dad, not around enough as he tries to earn tenure at the university where he teaches. On Halloween, Lawford finally gets tenure, and comes home to celebrate with his family. He even convinces his wife to let him take Charlie to a late-night Halloween parade (do those things really happen in NYC in 2015?) Charlie, who has been having odd visions of late, asks dad if they “can pay the ghost,” and abruptly disappears.

A year later, Mike and Kristen have been torn apart by the disappearance of their son, and start to have supernatural visions, including hearing a child screaming and seeing Charlie on a bus. Is Charlie trying to communicate to them from the other side? With a laughably small amount of research, Mike notices that while children who go missing are often found, those who disappear on All Hallow’s Eve rarely come home again. Someone, or something, is abducting kids on October 31st, and many of the guardians of the abductees tell the same story of the titular phrase being said just before they disappeared. Who is the ghost that must be paid? What must he or she be paid with? Does this have something to do with Cage’s notorious IRS problems?

It’s amazing how long “Pay the Ghost” drags itself through a feature-length running time with almost nothing to speak of in terms of plot. Charlie disappears, and dad looks for him. The set-up is a slog, as we know there’s no movie without dad making contact with his son again, and there’s absolutely no style or character to get us over the lack of narrative suspense. Cage doesn’t even give it his wide-eyed all; he’s more fun in “Left Behind.” Perhaps presuming that director Uli Edel would actually dramatically ground “Pay the Ghost” in something relatable, Cage actually plays it straight, which eliminates any B-movie fun that could even be had with this misstep. If you’re going to do a lackluster horror movie just for the money, at least try and have some fun with it.

Instead, “Pay the Ghost” does nothing that we haven’t seen done more entertainingly and incisively in other films. It literally has two characters at the 70-minute mark explain the entire narrative—where Charlie is, how to save him, why he was taken, etc.—in back-to-back conversations. It is the apex of lazy screenwriting. At one point, Lawford notes to his class that Washington Irving established the tone of his infamous piece "Sleepy Hollow" with just its name. So does “Pay the Ghost.” It’s to Pay the Bills. 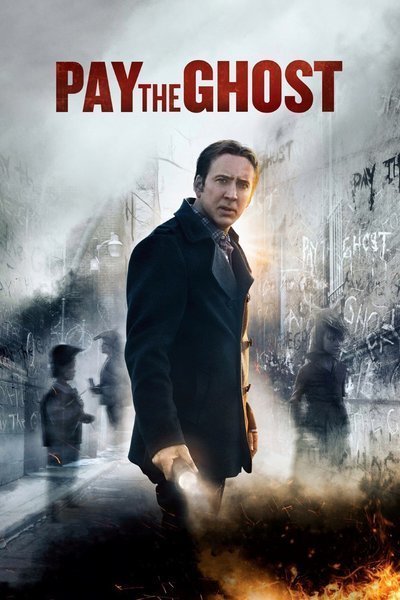