Anchorage, Alaska, circa 1983, looks and feels like a pioneer town in the Wild West in "The Frozen Ground," Scott Walker's new crime thriller (and first feature). It's a town teeming with strip clubs, drug addiction, prostitution, and runaway girls whom nobody would miss if they went missing. And they do go missing, in droves. Based on the true story of Alaskan serial killer Robert Hansen (played here by John Cusack), and detective Glenn Flothe (named, in the film, Jack Holcombe, and played by Nicolas Cage) who, in investigating a series of missing persons reports as well as a couple of dead girls dug up by animals out in the wilderness, starts to wonder if all of these events aren't somehow connected.

"The Frozen Ground" trucks in cliche, as most serial killer and police procedural films do, but the strength of the acting (from the leads down to people with only one or two lines) helps ground the film. Filmed in a frenetic style, with gigantic moving frenzied closeups, and an almost total lack of establishing shots, "The Frozen Ground" is best when it lands, and stays, on the faces of the leads: Nicolas Cage, John Cusack, and Vanessa Hudgens. When we are looking at their faces, we don't need to be reminded of the stakes. They're there in plain view.

It's hard to do something new in the serial killer genre, especially since the field is so over-saturated, from the 24/7 Investigation Discovery channel to "Criminal Minds"'s weekly obsession with how dangerous it is to be a woman because one minute you're walking down the street, minding your own business, the next minute you're chained up in a dungeon. All of those familiar elements are here. Jack Holcombe even has a resentful wife (Radha Mitchell), complaining to her husband about how hard he works, before doing an unmotivated about-face in a later scene. Why do movies so rarely know what to do with wives of workaholics? Why are they usually given the role of nag, before coming around in the final hour?

But "The Frozen Ground" is not trying to re-invent the wheel, and it also isn't trying to imitate "Seven" or "Silence of the Lambs." It is interested in Holcombe's increasingly urgent investigation, and the pushback he receives from higher-ups who don't want to re-open what were considered to be closed cases. There's one shot of Nicolas Cage sitting in a dark office, staring up at a bulletin board, covered with snapshots of missing women. That one shot establishes so much: his feeling of urgency, the sense of how huge this thing could be if anyone could find the missing links, and the loneliness of his quest.

Robert Hansen's name may not be as well-known as Ted Bundy, or John Wayne Gacy, but his murderous spree in 1970s and 1980s Alaska puts him in the Serial Killer Pantheon. Despite a troubled and violent background with tons of red flags, Hansen was able to maneuver undetected in Anchorage for many years, abducting young women, raping them, taking them via private plane out into the inaccessible wilderness surrounding Anchorage and then hunting them like game. He was married, with kids. He worked as a baker. People liked him, but he was quiet and kept to himself. He had a great cover persona, as most of these characters do. Flothe finally got a warrant to search Hansen's house, and found an aviation map covered with X's, to mark the spot of his burial grounds. Many of the victims were never found. We'll never know the number of women he actually killed. Hansen was sentenced to 461 years in prison with no possibility of parole.

Cindy Paulson (Vanessa Hudgens) is the teenage prostitute who managed to escape from Hansen's clutches, and went to the police to tell her story. She was not believed, because of her background. This is handled in a manner bordering on vaudeville, with one cop regaling a group of cops with the contemptuous comment, "I mean, how can a prostitute be raped?" They all laugh in agreement. This is not to say that such situations do not happen in police stations all the time, but the scene feels heavy-handed.

The scenes between Nicolas Cage and Vanessa Hudgens are the film's best. Nicolas Cage is so grounded here, so real and simple. The whole film really hinges on Holcombe trying to make Cindy trust him so that she will testify and be a reliable witness, and this is where Cage shines. His entire performance is about two things only: thinking and listening. He has a power of listening that is totally authentic, and he is quite generous to his young co-star. He is not concerned with himself, because Jack Holcombe isn't either. He listens to Cindy talk on a level that could be described as subterranean, with a cop's instinct for what isn't being said.

And Cindy is, to put it mildly, a handful. She has a pimp (played by 50 Cent, who also is one of the producers of the film), but things have gone south in that relationship. She wanders up and down the "Ho Stroll" in Anchorage, and gets a job dancing in a strip club. She does coke and crystal meth. She has nowhere to live, and stands on the sidewalk in the driving snow. (There is a breathtaking scene that has nothing to do with anything else, where Cindy, alone on a deserted side street, comes across a gigantic moose, which has wandered into the city. Moose and Cindy stand for a while, staring at each other. The snow falls. It is a moment that is beyond meaning, beyond plot, reminiscent of the encounter with the deer on the railroad tracks at dawn in "Stand By Me.")

John Cusack dials the burner down low, a smart choice, giving the character the guy-next-door persona which was so much a part of Hansen's successful M.O. When we see him in the flashbacks, with one of the girls he abducted (Gia Mantegna, in a gut-wrenching performance), he is calm, almost taciturn, even when he punches her in the head. He's almost kind and supportive with his victims, telling them they are "good girls." Cusack has placed his voice at a very interesting part of his register, making him sound (and seem) benign. It's a voice that almost isn't there. He is a hunter, a predator. He has worked hard at his camouflage.

Mixed in with the super fast hand-held action of the majority of the film are periodic aerial shots (Patrick Murguia is the cinematographer) of the forbidding Alaskan wilderness, mountains, glaciers, frozen rivers. These shots are constant reminders of what a vast field Hansen had to play in, and the impossibility of ever finding the missing. 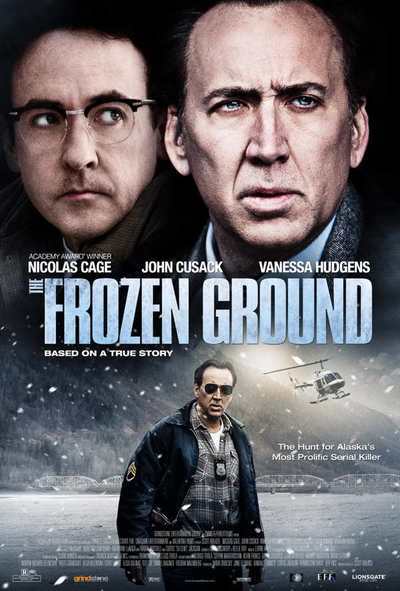