The status of actor Nicolas Cage’s career has now definitively shifted from its entertainingly eccentric phase into its genuinely befuddling and perhaps sad phase. Fans of the actor and followers of the tabloids are aware of his unpleasant encounters with the federal government with respect to taxes. So we, or they, know, or can infer, the reasons behind some of his more unusual career choices, such as his recent appearance in a reboot, such as it is, of the “Left Behind” film adaptations. Thing is, maybe we could be wrong about our inference. I once interviewed a very well-respected character actor who was in the middle of a run of undistinguished films, and asked him—wording the question rather politely, mind you—what such a fantastic actor with no tax issues that I knew of was doing in all this dreck, and his answer was pretty simple: he’s an actor. He likes to work. If someone offers him work and he’s available, he does it. Film fans tend to forget that for every role an actor wins in a movie, in his or her backstory there are tens, and maybe hundreds, of roles that he or she didn’t get.

By now you may be wondering why I’m musing on such matters rather than discussing the motion picture at hand. Your inference in this case is probably one hundred percent correct. Directed by stunt expert Nick Powell, here making his feature debut in this category, and written by James Dormer, “Outcast” begins with some hot Crusades action, with Western dudes in armor slicing up non-Western dudes; a title tells us we’re in the 12th Century in “The Middle East.” Why bother viewers with a level of detail they won’t need, right? Or maybe it’s that the filmmakers themselves neither know nor care. Seems a combination of both, maybe. Cage and Hayden Christensen play warriors who are, for their own reasons, distinctly embittered by all this crusading stuff. “Haven’t you had enough of this killing for hypocrite priests?” Cage’s Gallain asks Christensen’s Jacob, in a peculiar (of course) near-British accent. The exchange continues as swords clang, and Jacob chastises Gallain: “You’re not the man you once were.” “None of us are,” is the answer.

A little later, we are in the throne room of an emperor somewhere in Asia proper, and the clichés continue. A meek young prince is told he will be the next emperor, but insists he doesn’t want to, because the people will not accept him. “Your brother is a great warrior,” the aged emperor counters…“but…” There’s always a but. Cue Great Warrior Brother, Shing (Andy On), who bellows “The throne is my birthright!” stabs dad, and chases baby brother and baby sister. Holing up in an inn, baby brother and sister are waylaid by Shing’s men, only to be rescued by a mysterious and drunk Western warrior.

Not Cage, it turns out. No, it’s poor Hayden Christensen who plays the guy who’s going to save the two feckless Asians from the brutal relative, but you won’t think “poor Hayden Christensen” for long, because his performance is so lifeless you’re likely to start resenting George Lucas all over again, again. Will Cage show up again? Well, of course he will, happily, or sadly, enough, and he does bring his own particular brand of life to the proceedings, as when he tells Christensen “I should have left you for crow meat.” If you’re still watching the movie by this time, if you even started watching it in the first place, I can only imagine that you, like me, have some professional obligation to do so. Aside from providing an object lesson in how Chinese film financing forces some rather remarkable storyline convolutions into generic international action pictures, “Outcast” provides nothing of interest. There are hundreds of good to great action movies out there that you could watch instead of this. Some of them star Nicolas Cage. You’d be better off. Trust me. 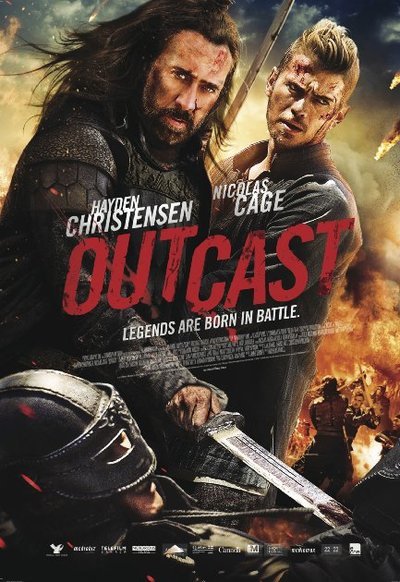 Andy On as Shing