The location that gives "Happy Valley" its title is never meant to be bitterly ironic; it just turned out that way. The movie's director, Amir Bar-Lev ("The Tillman Story," "My Kid Could Paint That"), doesn't push the irony. He doesn't push anything, really. He just recounts the whole sordid story of the Penn State football scandal again, then draws, or tries to draw, some lessons from it.

A few of the lessons we've already heard, and hopefully memorized, if we didn't know them already. One is that sexual predators don't tend to lurk in dark alleyways like cartoon gargoyles, looking for children to kidnap; they're more likely to hide in plain sight, as the Penn State football program's assistant coach Jerry Sandusky did for so many years, setting himself up as a model citizen and surrogate father to generations of young men, the better to satisfy his compulsions. (There are many unsettling images in this film, but the TV news footage and still photos of Sandusky's summer camp for boys ranks near the top.)

Another lesson is that when a crime is committed, an institution tends to view reporting it to proper authorities as a last resort. This was demonstrated during the investigations into Sandusky's crimes by law enforcement and the National College Athletics Association. A trail of emails later revealed that the school's beloved football coach, Joe Paterno—who reigned over the program for 46 years and died of cancer in 2012, not long after the scandal broke—reported Sandusky to the school as he was supposed to, then backpedaled and colluded with school administrators to keep the abuse a secret so as not to jeopardize the team's momentum, the community's pride or the school's finances and reputation.

A third lesson is that when sports and community pride fuse, as they so often do in college sports-crazy communities, fans just absolutely, positively do not want to hear any bad news about their team, and tend to avoid it, deny it, minimize it, or verbally lawyer it away on technicalities. We see the latter happening again when reporters—or average citizens who accept that Sandusky committed crimes and Paterno helped cover them up—tell die-hard Penn State boosters that the school failed its athletes and therefore deserves the abuse, scorn and penalties heaped on it, only to be met with some variation of, "Well, Paterno reported it, what more do you want?" or "Those crimes don't have anything to do with the great legacy of Penn State football."

"Happy Valley" wades into more problematic waters when it gets into the subject of guilt by association, and a community's related attempts to deal with scandal by simply obliterating any trace of the people who initiated it. Much is made here of whether the NCAA was right to take many seasons worth of Paterno's wins away from him, to send a message about the moral severity of the offense that he and his colleagues committed by participating in a cover-up. The program's partisans argue that Sandusky's crimes and the program's complicity didn't necessarily contribute to the school's won-lost record, and suggesting that they do only confuses the issues. There are points where the director seems to be questioning the logic of that decision as well, even linking it subtly to the community's attempts to eradicate images and sculptures of Sandusky and Paterno from local buildings and streets.

Related to this is the sense that the entire community, which knew nothing of Sandusky's crimes or the university's role in hiding them, is being punished along with the conspirators, by having the Penn State football program taken away, the athletic records punitively altered, and the words "Happy Valley" linked inextricably with sickness, cowardice and evil. What's the community's crime, they wonder? Loving football too much?

That's actually an excellent question, not nearly as loaded or defensive as it sounds. One could make the case that football is the United States of America's one true religion, the thing that brings everyone together, if only for a few hours a week, and when a religion is threatened, the faithful band together and refuse to listen to reason, and view any attempt to demand moral accountability from the exemplars of their faith as a form of blasphemy, or a collective assault.

The movie invites such comparisons by subtly (and sometimes unsubtly) likening American football to religion, and its coaches, assistant coaches and administrators to church officials entrusted with the care and guidance of young men. Echoes of the Roman Catholic Church's sexual abuse scandals are ever-present. When Happy Valley residents discuss and argue the particulars of the Penn State scandal, you sometimes hear a catch in their voices, or see tears welling in their eyes, because their values have been betrayed, or because their unshakable faith in the goodness of the program has opened them to ridicule and shame, and they know it.

It's slightly frustrating that the movie doesn't venture a point-of-view on any of these larger issues, which are less clear cut than the matters of sexual abuse and its immediate enablers. But it's also understandable, because what could "Happy Valley" conclude, ultimately? Any summation might have seemed glib or sanctimonious. We're left instead with troubling questions that might not ever yield satisfying answers. 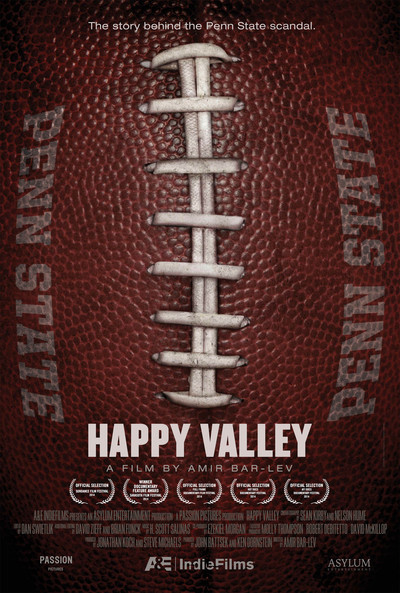