Out of the Furnace

"Out of the Furnace," about two suffering brothers (Christian Bale and Casey Affleck) in Pennsylvania steel country, hits some of the same notes as "The Deer Hunter" and Bruce Springsteen's early albums—"Darkness at the Edge of Town" and "Nebraska" especially. Unfortunately this film has none of their urgency or sense of control; for long stretches it just doesn't seem to have any idea what, exactly, it wants to say, or be.

The trailers promise a white-hot tale of revenge, with Christian Bale's butt-kicking Jesus-with-a-rifle avenging some unspecified horrible fate that has befallen his younger brother, a  veteran who has fallen in with backwoods gangsters (including Willem Dafoe and Woody Harrelson) and taken up brawling to pay off gambling debts. But the revenge portion of the film takes up maybe the last half-hour, and plays out with a haphazard literal-mindedness. The rest seems torn between two modes: the grimy yet intimate art-house drama, and the star-flattering martyr's tale of a man more sinned against than sinning. Performances as strong as the ones the cast gives here belong in a more less cluttered, deeper film.

The first hour of this movie from director-cowriter Scott Cooper is atmospheric throat-clearing, establishing the obligation that hero Russell Baze (Bale) feels toward his family. His widowed old father is dying. His younger brother Rodney (Casey Affleck) has a gambling problem, and has fallen in with a very bad crowd that includes local nightclub owner and criminal fixer John Petty (Dafoe) and Harlan DeGroat (Woody Harrelson), a New Jersey hillbilly who lives in the Ramapo mountain forest with his gang. The brutal prologue to "Out of the Furnace" finds Harlan sexually terrorizing a date at a drive-in, then beating a man who tries to intervene. The scene effectively establishes that Harlan is not to be messed with, but it also has a whiff of macho art-house pretension, as if somebody saw "Killer Joe" and wondered what would happen if you put the harrowing climax of that film at the start of another one. It's also dramatically unnecessary, as Harrelson exudes menace even when he's not moving or speaking.

Russell is positioned as a figure who suffers for the sins of others. Fate treats him as a human pincushion. When the movie opens, the hero has a loving girlfriend named Lena (Zoe Saldana) and decent job at the mill (even though the economic crash of 2008, an increasingly important event in recent American cinema, is scaring everyone to death). Soon after paying off his brother's criminal debtors, Russell lands in prison thanks to a mishap that wasn't really his fault. He endures brutality there, and emerges years later. His dad is dead, his former girlfriend has taken up with a local cop (Forest Whitaker, doing a bizarre "character" voice that makes him sound like a Muppet), and his younger brother, now a psychologically devastated war veteran, is bare-knuckle brawling in Harlan's secret matches to pay off his gambling debts.

You could figure out where this story is going even if the ads and trailers hadn't made it crystal-clear. "Out of the Furnace" takes a long time to arrive at the inevitable point when Russell decides to take bloody action, without providing enough depth to make the lingering beforehand feel like time well-spent, and without envisioning the criminal showdowns in anything but the most perfunctory way. The geographic and cultural details are documentary-credible, but its situations are pure Hollywood. This is an awkward mix that not many films can pull off.

Had "Out of the Furnace" been willing to fully embrace its coincidences, overheated emotions and allegorical touches, it could have been one of the great Guy Movies of all time, a bro tragedy on the level of "The Indian Runner," "A Perfect Storm" and, yes, "The Deer Hunter" (a film that wouldn't be name-checked repeatedly in this review if "Out of the Furnace" didn't strive to remind you of it, at one point brazenly lifting a key sequence involving a rifle, a deer and a moment of hesitation). Cooper's film has every element that bro tragedy requires: decent-souled yet emotionally constipated men toiling in working-class professions; a criminal subplot that leads to a grave offense and a desire for vengeance; a sense of an old order passing and a new, diminished one taking its place; and on the soundtrack, a string-laden orchestral score, interspersed with power ballads that sound as if they're being moaned by a man in pain. Serious or silly, this movie should have been irresistibly grand and propulsive.

Instead it limps along, occasionally seizing a glimmer of purpose but then getting distracted by a smoky sunset, a mythic silhouette, or a portentous bit of cross-cutting between moments that don't really have all that much to do with each other. The script, co-written by Cooper and Brad Ingelsby, genuflects toward relevance, citing the War on Terror and the depression of 2008 and beyond, but rather than emerge gracefully from the story, these aspects feel as slapped-on as bumper stickers.

Bale has played a number of intriguingly closed-off characters, including Bruce Wayne in Christopher Nolan's "Batman" movies, but his emotionally-numb-De Niro thing doesn't cut it here, however affecting the actor is close-up. The film fetishizes Russell by filming him like an epic hero even though he's a bit of a dope. Affleck, one of the best and most original actors in American film, fares better as Rodney, using his high voice and sinewy body as contrast against the character's machismo. He has one scene opposite Bale—an agonized confession of how badly the war has affected him—that hints at the raw, truthful movie that "Out of the Furnace" might have been, had its priorities been different. Dafoe is believably conflicted as the guy who lets himself be shamed into hooking Rodney up with money brawls even though he fears that they'll ruin him. Harrelson's Harlan is leering cobra who strikes every chance he gets. Some of his intimidating moments have a Dennis Hopper-like charge that comes from realizing the character is capable of anything; this would be magnificent if Harlan weren't written as a garden-variety thug who lacks imagination.

Most of the other actors are wasted, including Saldana, who's stuck in a generic girlfriend role (though she has one effective, painful scene with Bale on a wooden bridge), and Sam Shepard as Russell's uncle, who joins the hero on his adventures but doesn't get much dialogue or meaningful action. Halfway through, there's a scene that feels like the beginning of a tighter, tougher, wilder movie, perhaps a "Walking Tall" in steel country. You'll know it when you'll see it, because for a fleeting instant you'll be fooled into thinking that "Out of the Furnace" is going somewhere.

It's a shame, really. This is a rare big-budget American feature that's about working class characters doing things that could actually happen. It isn't a superhero picture, a sci-fi movie, a remake, or an adaptation of a bestselling novel. Mainstream cinema was thick with this sort of film forty years ago, but has offered fewer and fewer examples over time. I wish there were more films like "Out of the Furnace," only good. 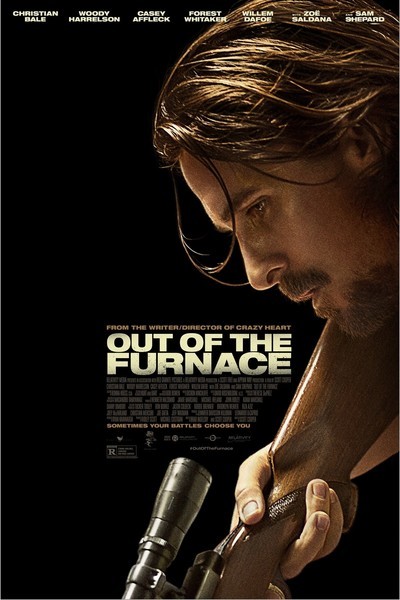