I played with a Ouija board exactly one time. More on that shortly. What amuses me about the game, and that amusement transfers over to the movie version, is that it proves that there is no such thing as bad publicity. People my age will remember campfire tales and urban legends about unlucky fools who were punished for choosing to contact the deceased using the spirit board trademarked by Hasbro, and if not, I’m sure you remember the 1986 movie “Witchboard,” if only for Tawny Kitaen appearing in it.

Regardless, whenever the Ouija board gets mentioned, something horrible is associated with it. No one ever tells a story about some schlub whose Ouija board told him the Mega Millions numbers, or some lucky lady who rocked the stock market based on tips from the afterworld. It’s always “she was messin’ with that Ouija board and a spirit KILLED her ass!” In all the stories I heard growing up, players wound up as dead as most of the cast of “Ouija.” And yet, people still bought the product. There’s probably even a Ouija app for your phone, so it can kill you before your Apple bill does.

I’m being facetious—sort of. The obvious allure of the Ouija board, and why the “based on the board game by Hasbro” credit appears prominently in this movie, is that these creepy stories are why people bought the product in the first place. In the current economy, Monopoly makes a more appropriate board game upon which to base a horror movie, but for what it is, “Ouija” is better than expected.

I like these kinds of kitchen-sink movies, films where, in an attempt to rattle you, they toss everything at you but the kitchen sink. “Ouija” gets a few extra points because it feels like the filmmakers were actually trying to tell a decent campfire story. The movie has a nice visual polish and a story that covers all the narrative bases of a good spooky bedtime story. Director Stiles White times its jump scares with the knowledge that jump scares are silly and predictable: A gas stove comes on with the sound of a jet engine, mirrors always have bad things reflected in them and a flashlight rolling away always stops rolling to illuminate something unfriendly.

“Ouija” begins with a rather creepy opening murder. After a flashback showing a childhood Ouija game, Laine (Olivia Cooke) arrives to pick up her best friend Debby (Shelly Hennig). Debby has just violated both of the Ouija game rules her younger version revealed in that flashback: she’s played the game alone and she’s burned her copy of the game. Debby begs off going out and dies a gruesome death soon after. The coroner deems it a suicide, but we know better.

Laine becomes obsessed with why Debby would kill herself, so she decides to use the Ouija board to try and contact her. Finally, somebody is putting this thing to good use! In my one encounter with the Ouija board, my cousin asked it a question any living relative of my family could have answered. Laine, who was always the one kid scared enough to believe the Ouija was real, has a legitimate query one can’t get answered in this realm. She convinces her friends to play along, using the same game Debby tried burning earlier in the film.

They go to Debby’s house, which makes sense I guess, and before the spirit that comes through can spell out its entire name (it only gets to the D), everyone assumes it’s Debby. This is what years of autocorrect will do to your brain. Had they just been patient, they’d have seen that this was no Debby.

You know what happens next, and “Ouija” knows you know. Writers White and Juliet Snowden pump up the tale with murdered little girls, sewn-together mouths, good reasons never to floss, crazy, murderous mediums and an appearance by the always welcome Lin Shaye. Shaye gives her exposition-heavy role the right amount of lunacy, menace and charm. She fills in the blanks that help Laine and her friends understand who exactly they’ve reached out and touched through the Ouija board. Her last scene, filled with maniacal laughter, probably mimics the Universal executives’ response when they see this weekend’s box office grosses.

Though I admit 16-year old me enjoyed the hell out of “Witchboard,” I didn’t think I’d have fun at “Ouija.” But I did, and assisting me were actors who gave their paper thin teenage types a little humor and character, and the film’s look. Shot by veteran camera operator, David Emmerichs, “Ouija” is a glossy hoot, showing more flair than a throwback to the 80’s horror movie should. As a lifelong horror movie viewer, I wasn’t scared by the film, but I dug the many ways it tried to goose me.

By the way, the question my cousin asked Ouija was whether my devoutly Baptist aunt would whup us for playing the game in her house when she explicitly told us not to do so. The board said no. I wish she had asked “when is my mother coming home?” The answer might have spared me a sore behind. 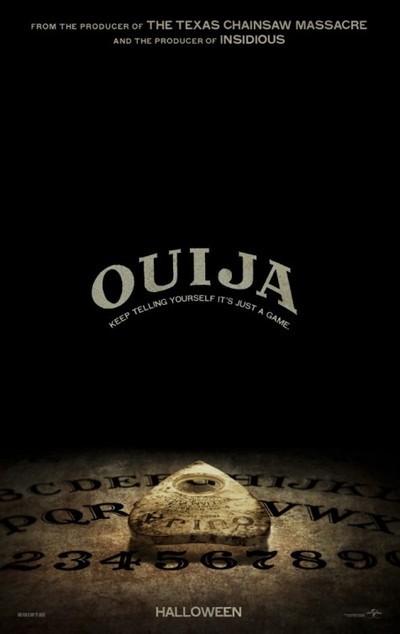