If you made a Bingo card of every likely scene, song, and comment that might come up in a movie about three middle-aged mothers who make a surprise visit to their sons, “Otherhood” would have you completing at least one row before the second act.

Is a cover of “These Boots are Made for Walking” on the soundtrack and do they sing along? What about “Lean on Me”? Shopping and a makeover and clinking of wine glasses? Does someone say, “You have to learn what it is to live without me, but I also have to live without you?” Does anyone say, “Are we really doing this?” and then do they do it? Do moms snoop around and give too much advice? Are some previously unspoken truths blurted out? Guilt trips? Bingo! But it does not feel like a win. Bonus points, though, if you also guessed that the sons live in ridiculously spacious New York apartments.

“Otherhood” is what the three suburban Poughkeepsie moms at the center of the story call their relationships with their sons. Relentlessly. They also say things like “motherhood is inhumane emotional waterboarding” and “mother is not just a noun. It’s a verb.” And “Sometimes it’s the second date when the magic happens.”

Which may be a clue as to why their sons ignore them.

At a boozy Mother’s Day brunch, the trio commiserate about feeling neglected and impulsively decide to go to New York to visit (i.e., confront) them. And make them dinner. Typical exchange: “You forgot Mother’s Day.” “I texted you.” “I birthed you.”

The ladies do as much as they can with three one-dimensional roles. Patricia Arquette is Gillian, the nudge-y one, a piano teacher who dresses like a frumpy flower child. She has alienated her angsty-writer son, Daniel (Jake Hoffman) by criticizing his girlfriend (“SNL’s” Heidi Gardner as Erin). She says she will not leave until he asks out a recently divorced (“Not her fault, at all!”) girl from someone related to someone who attends the same synagogue of the nephew by marriage of the sister of someone on her block.

Carol (Angela Bassett) is a widow who is not ready to leave the house she shared with her husband and son. Her hair is pulled back into a bun that makes her look like a 19th century schoolmarm. She once wanted to be an artist, but now volunteers twice a week to teach art in an assisted living home. Her son Matt (Sinqua Walls) is busy as the art director of a glossy magazine start-up that he would prefer his mother not know too much about. Or about the girls he brings home from bars.

And then there’s Helen (Felicity Huffman), who is very much about appearances, trying to hold onto her youth. Also holding on to her grudge against husband number one, even though she is happily re-married. Her son Paul (Jake Lacy in a ponytail) lives with his boyfriend. She is fine with his being gay but devastated when she learns that he confided in his father but chose not to tell her. There is more he did not share with her, too.

Huffman is particularly fine here. Her posture, her walk, her gestures and a slight breathiness to her speech all show us Helen’s deliberate attention to her mannerisms and the insecurity behind them. Hoffman (son of Dustin Hoffman) is also first-rate, making the most of a character who could easily have been dreary.

Director/co-screenwriter Cindy Chupack comes from television (“Sex in the City,” “Modern Family,” “Divorce”) and the movie’s cinematography, editing, and score have a sitcom-like brightness of tone that does not support the story’s darker moments. The emotional beats of the screenplay, co-written with Mark Andrus, are artificially constructed, tamped down, and curiously empty.

It stays on the surface, even on minor points like Carol’s question about whether a white hair stylist is familiar with the hair of black women. “What is your experience with my texture of hair?” she asks, as though she is asking about familiarity with ombre coloring or French tips. Gillian’s character is uncomfortably close to the stereotype of a noodge-y Jewish mother, and the exchange about how she converted when she got married is pointless. Why, because no one would believe Arquette came from a Jewish family? The women confide in and trust each other – until they don’t. Romantic and career and friendship problems are quickly but superficially resolved as though everything has to be fixed by the next commercial.

The three lead actresses also produced the film, presumably because there are not enough good roles for women over 35. They need to look a little harder. 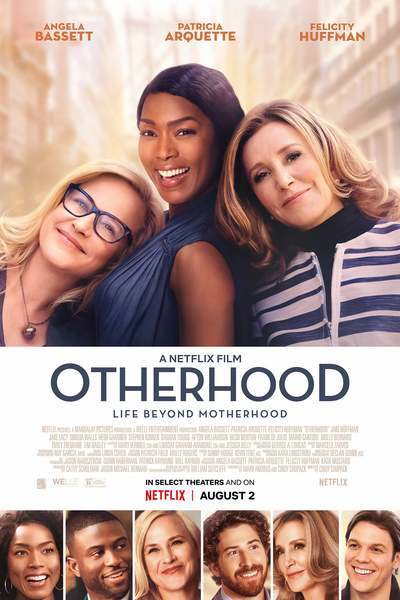 Writer (based on the novel 'Whatever Makes You Happy')