One Direction: This Is Us

Morgan Spurlock made his name by questioning the power of corporate culture, casting a critical yet charismatic eye as the director and star of documentaries including his Oscar-nominated "Super Size Me" and "The Greatest Movie Ever Sold."

With "One Direction: This Is Us," Spurlock becomes a cog in the machinery. In chronicling the juggernaut of the British boy-band during their recent world tour, he presents a piece of propaganda as glossy and managed as similar depictions of The Jonas Brothers and Justin Bieber.

Young, female fans of the fab five probably won't care, and the parents who are forced to accompany them to the theater probably won't mind. The lads are lively and likable, their songs non-offensive and interchangeably poppy. "This Is Us" does what it needs to do for its target audience. But anyone looking for actual substance or insight will be disappointed and maybe even a little bored with its repetitive nature.

For the uninitiated: The members of One Direction are former cast-offs from the British version of the singing competition "The X Factor" whom producer and media mastermind Simon Cowell threw together as a group in 2010. (Cowell is also a producer on "This Is Us.") Before they'd even cut their first album, they'd already established a massive following, thanks to the television exposure and the instantaneous global reach of Twitter.

They are a confection, held together by hair product and harmony. But you can see the allure of them; the 11-year-old in me, who loved Duran Duran lead singer Simon Le Bon, gets the giddy, giggly sensation they produce.

Harry Styles, a former Taylor Swift paramour, is the rakish one in the mold of a young Mick Jagger. Niall Horan, the lone Irishman, is the impish, playful one. Zayn Malik is a darkly gorgeous graffiti artist; half-Pakistani, he's also a practicing Muslim, a fascinating fact that "This Is Us" doesn't even bother to mention in passing. Louis Tomlinson, the oldest member at almost 22, has looks reminiscent of a young Frank Sinatra. And the heavily accented Liam Payne has an amiably goofy authenticity.

They are all of legal drinking age in England but you never see any of them say the word "beer" much less drink one. Same goes for cigarettes. The boys are all kept far, far away from the frenzied fans in every city they visit, while still remaining within audible screaming distance. You'd never know that any of them has a girlfriend—Zayn recently got engaged, actually—or even groupies. All the better to make them seem accessible, adorable.

Spurlock has said he intended for "This Is Us" to be his version of the groundbreaking Beatles film "A Hard Day's Night." But while we see the members of One Direction running from mad throngs in the streets and enjoying wacky antics backstage between the high-energy 3-D concert performances, we never get a sense of them as real people with recognizable, human emotions beyond joy or gratitude. At one point, Liam laments that he wonders whether anyone will ever love him for him. Harry comes to closest to saying anything remotely negative when he acknowledges that he doesn't always love this life. And while they're all clearly talented, confident singers, we get no sense that any of them has a deep passion or drive to make music.

Mostly, they marvel at the fact that they're just five regular lads having the time of their lives (and to their credit, they're not completely polished, acknowledging that they're terrible dancers and refusing to attempt 'N Sync-style choreography). They're just mates, they tell us. They're like brothers. Each of them utters something along these lines over and over again, along with appreciation for the devotion of their fans.

Spurlock might have omitted a few of these repetitive moments in favor of more lengthy exchanges between the guys about their fame and success. In a rare, seemingly candid scene—staged, of course, but still—Harry and Liam wonder what their lives would have been like if they hadn't auditioned for "The X Factor."

Someday, we may get the true story of One Direction behind the scenes, full of fears and fights, egos and eccentricities. But today is not that day, and Spurlock is clearly not that storyteller. 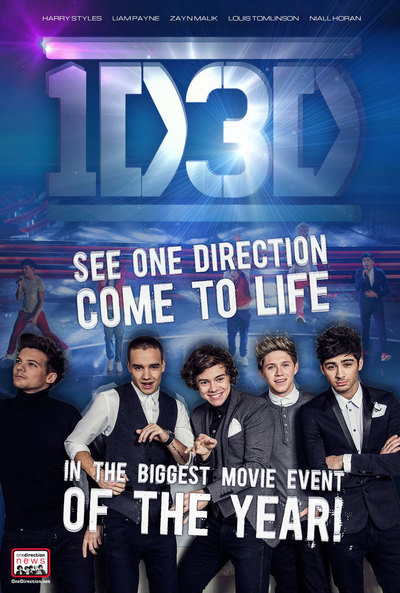 Harry Styles as Himself

Niall Horan as Himself

Zayn Malik as Himself

Louis Tomlinson as Himself

Liam Payne as Himself