For years after the breakup of The Band—the real sundering of musical and personal bonds, occurring some time after the farewell celebration depicted in Martin Scorsese’s movie “The Last Waltz”—its multi-instrumentalist (but mostly drummer) and singer Levon Helm would complain to anyone who would listen (or so it seemed) about what a snake his bandmate Robbie Robertson was. Self-aggrandizing, publishing thief, liar, inappropriate booker of Neil Diamond—you name it, that was Robbie.

Through it all, Robertson kept his own counsel, never publicly responding to Helm. During Helm's final illness and leading to his 2012 death—leaving Robertson and multi-instrumentalist Garth Hudson as the only surviving member of the seminal group, there was talk of a Robertson visit to Helm in the hospital, to make peace. Helm was not conscious for the occasion. (Manuel died in 1986, a suicide, and Danko died in 1999 of heart failure at the age of 55.)

Now Robertson, in the wake of an engaging print memoir called Testimony, tells his own version of the story in song—the movie’s title is taken from a Robertson tune—and cinema. Directed by Daniel Roher (and produced by, among other Sam Sutherland, who was a friendly colleague of mine at the MSNBC Entertainment website many years back) “Once Were Brothers: Robbie Robertson and The Band” rolls out an impressive array of witness and commentators right off the bat. Bruce Springsteen, Eric Clapton, Scorsese and blues giant Taj Mahal all weigh in on the greatness and importance of The Band—from its role in backing Dylan to its own mighty catalog of classic, and wonderfully rendered, songs—pretty much right off the bat. And Robertson himself, whose personal charisma came into full flower in “Waltz,” after he lost the glasses, shed the facial hair, and got a couple of scarves that inspired film critic Andrew Sarris to characterize his good looks as “Byronic,” faces the camera to tell his tale.

And quite the tale it is. Born on a reservation. Told at a youthful age that the man who raised him wasn’t his father. Falling in love with rock 'n' roll. Meeting journeyman rocker Ronnie Hawkins and determining to write songs for him while not yet seventeen. Succeeding at writing songs for him. And meeting the Arkansan drummer Helm, three years his senior—a universe of a difference when you’re 16—and finding a mentor and partner.

These days as recounted by Robertson, and bolstered by contemporary interviews with the still-active Hawkins and archival footage, including some interviews with Helm himself, feel glorious. One interviewee marvels that The Band contained not one but three of the most distinctive vocalists in the area of music that would come to be called “Americana”: Helm, bassist Rick Danko, and pianist Richard Manuel. The wizardry of Hudson made The Band’s sound otherworldly. And Robertson’s songs, in the beginning written in tandem with other band members, had a magic both literate and rootsy.

Up in Woodstock, New York they were the first rock band to set the example of “getting it together in the country.” But these guys had their demons and attachments. It’s harrowing to hear Dominique Robertson recount how a wasted Manuel inveigled her to let him drive her new sports car. “I sober up when I’m driving,” he insisted. She believed him. They were clearly very young then. The car was totaled in a ditch.

And then there was heroin. By the time of The Band’s third album, Stage Fright, Manuel, Danko, and Helm were all in its grip. (It’s to somebody’s credit, who can be entirely sure, that you’d hardly suspect such a state of affairs while listening to this excellent LP.) Robertson was looking for a way out even if he didn’t know it. Enter David Geffen, who comes off like an absolute jerk here, albeit one with way too much money. He pursues Robertson to quit Woodstock—“I thought it was a shithole,” he exclaims—and resettle in Malibu. The other fellows follow suit. It’s sunnier, but you can still get drugs there.

As earnest, forthright and poignant as the surviving players wax—and it’s worth pointing out here that the Dylan interview footage is culled from the sessions that were filmed for Scorsese’s “No Direction Home” documentary, and that Garth Hudson did not participate in any interview sessions for this movie—there is a pronounced sense of Robertson taking back a story he clearly feels has been hijacked. There’s a scene early in the movie in which Robertson recounts tracking down the brothers of the father he never knew, and learning that they’re Canadian-Jewish gangsters, more or less. These amiable fellow don’t understand young Robbie’s ambitions—what’s with the rock ’n’ roll and all?—until they put it together and exclaim: “You want to be in SHOW BUSINESS.” For all the grand achievements chronicled here—and the music still sounds pretty great—this still is a show business venture. 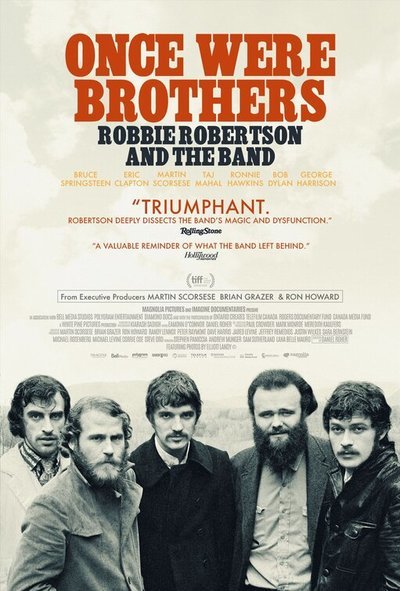 Once Were Brothers: Robbie Robertson and The Band (2020)

Robbie Robertson as Himself

Peter Gabriel as Himself

Van Morrison as Himself

Ronnie Hawkins as Himself

Taj Mahal as Himself