Earlier this year, GKIDS released a restored version of Studio Ghibli’s rarely-seen and masterful “Only Yesterday,” and they end the year in a similar fashion, digging into the vaults to present U.S. viewers with an animated drama from one of the most important film companies in history (now in limited release in NY).

“Ocean Waves” was broadcast on Japanese television in the early ‘90s, but has been hard to find in the United States since then. Reportedly sprung to life as an opportunity for some of the younger animators at Ghibli to spread their wings, “Ocean Waves” is the first Ghibli film not directed by Hayao Miyazaki or Isao Takahata, although one can see the fingerprints of both gentlemen on the final product. With an incredibly short running time (72 minutes) and deceptively simple story, “Ocean Waves” could feel like a footnote in the Ghibli story but it features qualities of its own as well. It’s a delicate, well-told drama that may lack the depth of something like “Only Yesterday” but proves that Miyazaki and Takahata’s students were listening to their teachers.

Directed by Tomomi Mochizuki and written by Kaori Nakamura (from a novel by Saeko Himuro), “Ocean Waves” is a story of memory and love. Taku is a young man at a train station in Tokyo when he spots a familiar face on another platform. Could it be Rikako, the young woman who changed his life in school just a few years prior? The film then flashes back to Taku’s time in school, focusing on the new girl who shakes everyone up. Taku first spots Rikako through the eyes of his friend Yutaka, who spotted the alluring young woman through a window. Her back is to the window now and so Taku has to take his friend’s opinion of her as fact. He’s immediately seeing this person through the eyes of his friend, which makes it even harder for him to later admit he has feelings for Rikako, for fear that it will break his friendship with Yutaka.

Yes, the people known for masterful fantasies like “Princess Mononoke” and “Spirited Away” made a love triangle drama. It’s an even more gentle and often uneventful film than its description might lead you to believe. It’s an episodic tale of encounters between Rikako and Taku. There’s a school trip to Hawaii during which Rikako loses her money and asks to borrow some. There’s a fateful trip to Tokyo in which Rikako tries to find her father, and Taku ends up tagging along. There’s a lot of slapping. An argument could be made that if “Ocean Waves” weren’t animated and starred three CW stars it would be a dull mess.

But it’s not. And “Ocean Waves” is worth watching to see just how much a company like Ghibli can bring to a relatively simple tale. Music is often key in their films—it sets a tone and helps guide the audience. Shigeru Nagata’s score is constant, sometimes to a distracting degree in the first half, but it becomes a part of the fabric of the piece overall, and the film wouldn’t work without it. Of course, the Ghibli team also brings a gentle, graceful visual sense to the film that others wouldn’t even consider. It’s incredibly subtle here—there’s no fantastical creature design or world creation to make it obvious—but it’s still there. It’s in the character detail, the cuts to shots of nature to link episodic memories, the color choices, and more.

In 1993, Studio Ghibli was still a relatively young company. Sure, Miyazaki and Takahata had already dropped a few masterpieces, but the company had several more ahead of them, along with the international fame they would get over the next quarter-century. “Ocean Waves” may not be a fantastic film on its own (“Only Yesterday” is, for the record) but it’s never dull and helps flesh out the story of a company talented enough to eventually change the world of animation forever. 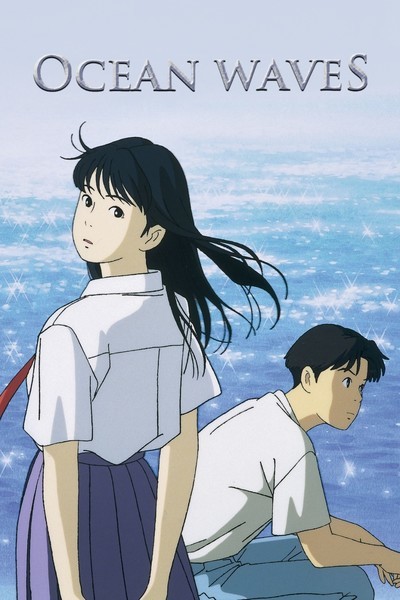