2014’s U.S. release of Isao Takahata’s amazing animated swan song “The Tale of the Princess Kaguya” was a gift and a miracle in and of itself, but it’s also yielding some dividends. The first great movie of 2016, as far as U.S. releases go, is an animated picture that was made in 1991: Takahata’s breathtakingly beautiful and quietly but devastatingly moving “Only Yesterday,” seeing its first screenings here in both its original Japanese-language version and a scrupulously English-dubbed edition featuring the voice talents of Daisy Ridley, Dev Patel, and Ashley Eckstein.

“Only Yesterday” is one of a very distinguished handful of feature films that Takahata directed for Studio Ghibli, the outfit founded by Takahata’s friend and frequent collaborator Hayao Miyazaki. Takahata’s work has been marked by a determination to take on stories that U.S. viewers wouldn’t necessarily associate with animation, for instance his 1988 World War II survival drama “Grave of the Fireflies.” He’s also shown interest in expanding and changing up the aesthetic of anime, as in his 1999 “My Neighbors the Yamadas,” designed in the seemingly minimalist style of Japanese comic strips. “Kaguya,” which Takahata announced would be the last film he would direct, was a kind of grand summation of his work in terms of both form and content. “Only Yesterday” is a good companion piece for a number of reasons—like “Kaguya,” it functions as a highly sensitive and empathetic consideration of the situation of women in Japanese society—but it’s also a breathtaking work of art on its own.

There’s no fantasy or supernatural element in the movie, but that’s not to say that it entirely eschews the fantastic. The main character is a kind of young Japanese everywoman, or everywoman nonconformist. Taeko is a 27-year-old single salarywoman in 1982 Tokyo. The movie begins with her telling a work colleague that she’s off to visit relatives in the countryside. Truth is, she has no actual close relatives there, but rather has signed up to help the family of her brother-in-law’s older brother in her destination to harvest safflowers.

“I didn’t expect to bring my fifth-grade self along for the trip,” Ridley, speaking with a U.S. accent (for those keeping track, Ridley is British and speaks with her native accent in this independent film called “The Force Awakens;” her costar in that film, John Boyega, also hails from England but speaks in that film with an American accent; it’s called acting, in case this all worries you), muses on the soundtrack of the English-dubbed version. And yet here she is. On the train, Taeko relates and relives events from her childhood. Some funny and charming, but most of them sad and disturbing. The mockery of more popular girls, the awkwardness of waiting for first menstruation, the cruel coldness of a father who refuses to allow her to participate in a semi-pro theatrical endeavor. The persistent squashing of her hopes and dreams helps make her eventual adult solitude make some kind of sense, but the film is not so crude as to make an overt insistence on cause-and-effect. The movie allows Taeko to keep some secrets, in a sense. As I mentioned, there are no overt fantasy elements in the story but the animated format allows visual metaphors for feelings to come to life. On the rare occasion when fifth-grade Taeko feels like she’s floating on air, she floats, and a big pink heart appears in the sky. In the flashback sequences, Takahata’s spectacular use of negative space—the details of a softball field stretching out into a big field of white in the frame, for instance—gives a palpable sense of a world only partially regained to the senses.

Once Taeko reaches her destination, she strikes up a friendship with young farmhand Toshio, with whom she talks out more of her mid-‘60s trauma. The possibility of a romance is broached, but the film’s ending, while tear-jerkingly satisfying, is … well, you ought to see it yourself. That it plays under the final credits is noteworthy.

The English language version keeps the movie intact (I actually saw it for the first time in an unsubtitled Japanese version, via a laser disc I bought in Japan in the early ‘90s, such was my Studio Ghibli fandom at the time), Beatles references and cigarette-smoking characters and all. 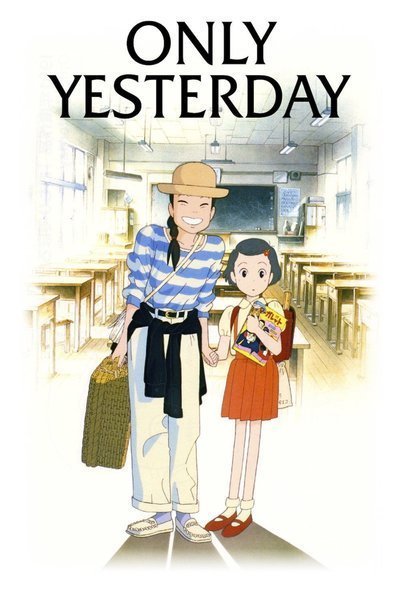