If nothing else, "Oblivion" will go down in film history as the movie where Tom Cruise pilots a white, sperm-shaped craft into a giant space uterus. The scene is more interesting to describe than it is to watch. Cruise's sperm-ship enters through an airlock that resembles a geometrized vulva. He arrives inside a massive chamber lined with egg-like glass bubbles. At the center of the chamber is a pulsating, sentient triangle that is also supposed to be some kind of mother figure. Cruise must destroy the mother triangle and her space uterus in order to save the Earth.

Like director Joseph Kosinski's debut, "Tron: Legacy" (2010), "Oblivion" is a special effects extravaganza with a lot of blatant symbolism and very little meaning. It starts slow, turns dull and then becomes tedious — which makes it a marginal improvement over the earlier film. It features shiny surfaces, clicky machinery and no recognizable human behavior. It's equally ambitious and gormless.

"Oblivion" is set in the year 2077, 60 years after an alien invasion rendered the Earth largely uninhabitable. Cruise stars as Jack Harper, one of a handful of people left on the planet. The other survivors have long since relocated to Titan. Harper and colleagues remain as technicians, servicing robot drones that defend resource-gathering stations from alien stragglers.

Harper lives in a penthouse-like tower with his communications officer, Vica (Andrea Riseborough). Vica's eyes are permanently dilated. Like Olivia Wilde's Quorra in "Tron: Legacy," she often resembles a marionette.

Harper and Vica spend their days fixing drones, eating candelit dinners, and swimming in a glass-bottomed pool. Their boss, the creepily cheerful Sally (Melissa Leo), supervises them from an orbiting control center. In order to maintain the integrity of the mission, Harper and Vica's memories have been wiped; nonetheless, Harper is haunted by extremely cheesy black-and-white dreams of a beautiful woman meeting him in pre-invasion New York.

One day, Harper spots an antique spacecraft crashing into the countryside. He manages to rescue one survivor, a Russian astronaut (Olga Kurylenko) who looks exactly like the woman in his dreams. Harper brings her back to his tower. This incites jealousy and suspicion from Vica, who is both Harper's partner and his lover.

The astronaut has been in cryogenic sleep for the past six decades but refuses to disclose the nature of her mission to Harper and Vica until they recover her flight recorder. It goes without saying that the flight recorder unearths all kinds of secrets about Harper, Vica, and the alien invasion. It also creates one of the movie's more glaring logical errors, but that's a different story altogether.

The film's opening stretch is its one strong point —  a gradual, immersive build-up of details. It's a smart technique for science-fiction storytelling; it eases the viewer into the world of the film. The problem is that the world "Oblivion" introduces — an abandoned, depopulated Earth — is more interesting than the story it tells. Or, more accurately, the stories it tells, because "Oblivion," derivative to a fault, tries to be several science-fiction movies at once. It tries and it fails.

"Oblivion" is a political allegory about a lowly "technician" sending unmanned drones to hunt and kill a demonized, alien Other — until it forgets that it ever was. It's a wannabe mindbender that raises questions about its lead character's identity — except that the lead character is too sketchy to make these questions compelling. It's a story about humans struggling for survival in an environment controlled by technology — except it appears to be much more interested in the technology than in the humans. It's a rah-rah action flick — except its action scenes aren't very good.

The only thread "Oblivion" follows to the end is its "creation myth." Harper is an idealized man; he's good with a gun, good with his hands, good in bed, loves football and rides a motorcycle. Though most of the movie's characters are women, not one of them is able to do anything without Harper's help — not even the mother triangle that lives in the space uterus. Only his rugged-but-sensitive masculinity holds the key to humanity's survival. The movie reaches for profundity, but all it grasps is misogyny. 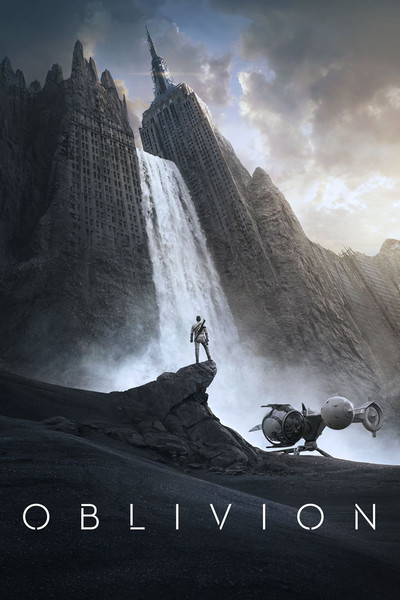