How you feel about Norman the character will determine how you feel about “Norman” the movie. He’s a complicated man, and not necessarily a likable one. A self-styled “consultant,” he is whoever he needs to be at any particular moment, depending on the situation he’s trying to insinuate himself into or the person he’s trying to manipulate. Is he a shameless hustler? Or is he merely an overbearing yet well-intentioned mensch?

And yet, in Richard Gere’s deft, veteran hands, Norman Oppenheimer is consistently, completely fascinating. You may not be able to root for him, but you can’t help but feel for him. “Norman”—the full title of which is “Norman: The Moderate Rise and Tragic Fall of a New York Fixer”—similarly remains gripping as it evolves from funny to sad to suspenseful. Writer/director Joseph Cedar has created a rich character within a vivid sense of place. All we can do is watch and squirm.

With his ever-present overcoat, hat and ear buds, Norman is always walking and talking, always working it. He’s warm and friendly to everyone he meets, fancying himself as a magnanimous, well-connected power broker who’s eager to introduce people to each other for their mutual benefit. Please, just let him do this one favor for you—it would be his honor. But it’s clear that no one really knows Norman, and even though Gere is on screen for nearly the entirety of the film, we realize by the end that we don’t really know Norman, either. And that’s intentional; Cedar has made him a tantalizing mystery.

What Norman is after, though, becomes achingly clear: not the money that closing a big deal would bring, but rather the prestige, something that’s more amorphous and harder to acquire. He finally achieves some semblance of the access and respect he long has sought when he befriends an Israeli diplomat named Micha Eshel (an excellent Lior Ashkenazi, who also co-starred in Cedar’s 2011 film “Footnote”), who’s visiting New York at a vulnerable time in his political career. A scene in which Norman follows Eshel into the Manhattan Lanvin store and helps him try on expensive suits and shoes plays like an exquisitely tense, delicate dance.

Three years later, when Eshel becomes Israel’s prime minister, he remembers his eager-to-please pal and welcomes Norman into this inner circle—to the frustration of the seasoned political aides who already occupy spots there. But as Norman begins making promises he can’t keep to friends throughout New York’s Jewish community and getting in deeper over his head, his exaggerations and outright lies come back to haunt him. Not only does he find it increasingly difficult to maintain his well-honed persona, he also finds that being near the center of power isn’t as satisfying as he’d always imagined.

It’s a classic case of being careful of what you wish for. But Gere brings such nuance to Norman’s various shadings, he constantly keeps us on edge. His final fate feels a bit anticlimactic, especially given the elaborate, expertly paced build-up that preceded it. But Gere keeps us guessing until the end, with the ultimate question lingering: Does Norman actually believe his own spin? It could go either way. Gere is expertly cast, finding a different key to his typically charismatic screen persona—one that’s larger than life, but with a jittery, buzzing undercurrent.

The supporting cast is strong, as well, especially Michael Sheen as Norman’s nephew and much-needed (if not heeded) voice of reason and Steve Buscemi as Norman’s sympathetic rabbi. Charlotte Gainsbourg brings a quietly unsettling presence as an inquisitive government worker Norman schmoozes up on a train. And Josh Charles is just withering in one scene as an affluent, influential New Yorker whose dinner party Norman makes the mistake of crashing.

You may not like Norman—and you may not want to invite him to your own dinner party—but you’d be foolish to dismiss him outright. 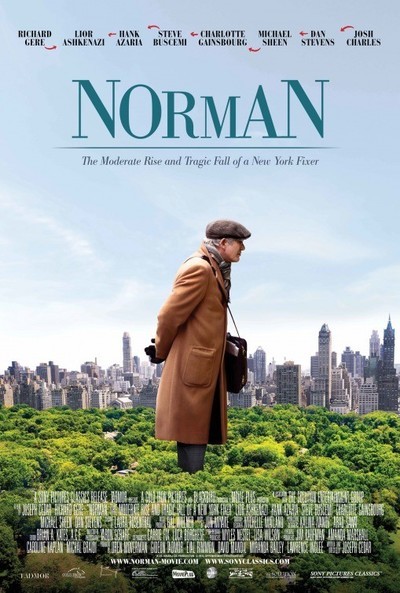