In its opening scenes, “Non-Fiction,” the latest film from writer-director Olivier Assayas, seems like a life-in-these-times picture in the mode of “Summer Hours.” In that 2008 film, a family pondered how to dispose of an artistic legacy left to them by a beloved relative, spurring a lot of smart conversation about the function and utility value of art today. In “Non-Fiction,” the main character, Alain (played with peak middle-aged male foxiness by Guillaume Canet) is an editor at a revered publishing firm trying to figure out how to propagate literature in the digital age. This leads to a lot of pleasant but intense conversating about e-books, blogs, Twitter, all the stuff The Kids are into.

But while “Summer Hours” evolved into an elegiac consideration of both family mortality and civic responsibility, this picture takes a detour from genuine inquiry into these issues—about which its perspective is ultimately way less dire than that of Assayas’ 2002 Internet apocalypse corporate thriller “demonlover”—to become a frequently hilarious sex comedy.

Alain has a frustrating lunch at which he doesn’t quite make clear that he’s turning down a new manuscript from one of his long-time authors, Leonard, a shaggy schnook played by Vincent Macaigne. This guy is very funny—practically a Gallic Charlie Day. This suits well a character who can’t leave his own kitchen without getting dumped on. Once the news finally gets through to Leonard, he’s bummed, but when he informs his attractive, brisk partner Valerie (Nora Hamzawi) she can’t be bothered to commiserate, instructing him to buck up in no uncertain terms—“revise,” she says, or move along.

Valerie is a pragmatist—it feels like she’s the sole American in a group of very French people. A dinner party at which she’s dragged by her friends for her faith in the politician she’s working for is underscored by a subsequent scene in which she has to browbeat her boss. All the actors here are terrific, but Hamzawi’s sexy warmth here is a revelation; she puts across a character who seems capable of genuine, plain happiness, something most of the other characters haven’t the vaguest conception of.

Alain’s wife, Serena, played by the ever-transcendent Juliette Binoche, is an actress with the career blahs, trying to decide whether she wants to sign up for a fourth season on the TV drama “Collusion,” whose name her fans tend to think is “Collision.” She also fears Alain is having an affair. And he is, with the sleek new digital manager at his firm, Laure (Christa Théret). But Binoche’s character has her own thing going, and my jaw dropped when I found out who with, as may yours. And it’s with this revelation, 40 minutes in, that the film juices up.

This is a sexy, fun film filled with a lot of zingers, but it also feels a little less personal than many of Assayas’ movies, perhaps in part because it’s not stuffed to the gills with songs he loves. (Not to say that tunes are entirely absent—the movie ends with a particularly apt one, and there’s a same-sex love scene that features Heinz’s immortal “Just Like Eddie” playing in the background.) The final minutes mix what-fool-we-mortals-be wryness with sunlit contentment. The movie is such a gabfest that when it winds down to just let a couple of its characters look at each other fondly, it’s an epiphany. 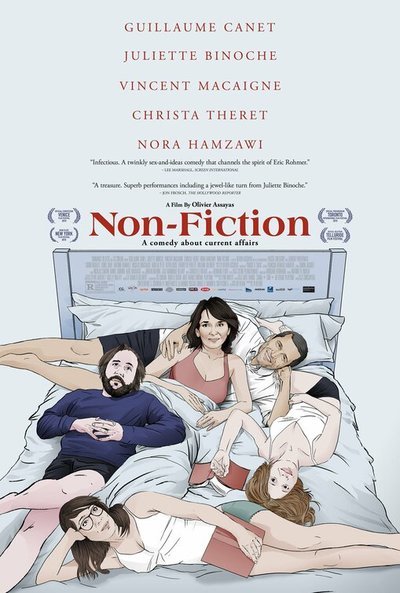 Rated R for some language and sexuality/nudity.