This may or may not be one of the best films of 2016, but it’s absolutely one of the most interesting. Or maybe I should say least boring. If I sound puzzled, it’s because I am. Sort of. A little bit. “Nocturnal Animals” is a work of exceptional, undeniable craft, but it’s also a movie that’s meant to stick to you a little bit. Indeed, so vehement is writer/director Tom Ford in articulating his vision at times that you think he’d be disappointed by a viewer that wasn’t at least a little bit angry with him over the movie.

I know from reading the responses to the movie when it played at the Toronto Film Festival that some critics were very angry about the film’s opening images, which play over its opening credits. I’m not going to be coy here—they are shots of a series of naked women festooned with cheerleader regalia, shaking pom-poms and brandishing lit sparklers and such. The twist is, these naked women are, to a one, morbidly obese, sometimes to the point of looking deformed or mutilated, and the shots are, it should be no surprise to learn, in slow motion.

As I observed when I wrote about the movie in September, from the Venice Film Festival, said images aren’t gratuitous, or—I should have said—without a diegetic rationale. (This review draws on the thoughts and words I had about the film at that September viewing.) The cheerleaders are part of a conceptual art exhibit hosted by Amy Adams' Susan, a gallery-owning high roller in the Los Angeles art world. Susan is beautiful, haughty, lives an extravagant lifestyle funded largely, we assume, by her husband Hutton, played with born-into-privilege knowingness by Armie Hammer, and thoroughly, thoroughly miserable. After her opening, Susan gives herself a nasty paper cut opening a package: the manuscript of a first novel by Edward Sheffield, Susan’s first husband. She’s disturbed by the package and the accompanying note. So disturbed that she impulsively reveals herself, indirectly, to one of her many personal assistants, asking that assistant about whether one’s life choices could add up eventually to a single awful mistake. The assistant, who hasn’t yet made any crucial life choices, has no idea what Susan is talking about.

Susan soon settles in with Edward’s novel. At this point in the meticulously designed and directed film, a seemingly parallel narrative pops up. Tony Hastings, a refined, cultured family man, played by Jake Gyllenhaal, is taking off on a road trip through West Texas with lovely wife (Isla Fisher) and lovely but typically disaffected teen daughter (Ellie Bamber). On the road, late at night, Tony and his family have a run-in with exactly the kind of people with whom you don’t want to have a run-in, under any circumstances. From behind, from aside, and from ahead, three amped-up wastrels led by a schizzy dude named Ray (Aaron Taylor-Johnson, in a role that will earn him the legit cred he’s been going after, on and off, for a while), harass Tony and his car until they both run off the road. Things go from bad to worse in a sequence that’s one of the most discomfortingly suspenseful in a Hollywood film since, maybe, “Blue Velvet.” We know, or at least can infer, that it isn’t real, that it’s actually two degrees of unreal, since what’s happening is a cinematic version of the novel that Edward has sent. The novel that Edward has dedicated to Susan.

And why has he dedicated it to Susan? Is this a fictionalized version of some horrific event that happened in their own shared past? Not quite, it turns out. Soon the third narrative thread comes into play, the story of Susan and Edward, also played by Gyllenhaal. They’re both young and idealistic lovers. He encourages her to pursue art—not as a business, but as a calling. She wants him to be more responsible, or realistic. She dreads turning into her materialistic upper-crust mother. He’s not so sure she dreads it. Emotional damage ensues, but nothing like the stuff that happens in Edward’s novel. This is a movie that, among other things, trusts the viewer to make sense of it, or maybe demands the viewer make sense of it.

The individual stories are kept in the air beautifully by Ford, the fashion designer who’s learned a lot about the distinction between effective stylization and ostentatious stylization since his debut feature of 2009, “A Single Man.” Some of its weaker moments come when Ford is at his most vehement: a scene in which Susan goes to a board meeting of an L.A. museum and interacts with a super-affected Jena Malone is claws-out as these things go but doesn’t cut to the quick. (Malone looks funny enough, wearing a wearing a dress that looks like a rejected costume for the chessboard scene in “Alice Through The Looking Glass.”) Michael Shannon, on the other hand, achieves a career high with his dry but enigmatic portrayal of a Texas lawman with nothing left to lose. Abel Korzenioski’s very prominent musical score is almost pure pastiche, but it’s accomplished: its fake Bernard Herrmann is as convincing as its fake Phillip Glass.

All the threads will pull together, we presume, when Edward and Susan (whose current life continues to turn to rot as she makes her way through Edward’s dark novel; Hutton, away on business, is cheating on her so blatantly he’s almost too bored to hide it anymore) meet up in real life. The movie’s final scene is one that intends to have viewers talking animatedly as they leave the theater and for a long time after, and right now my takeaway from the movie is a question: why didn’t it affect me very particularly? But this is also a movie that suggests that not having a strong reaction is a way of having a strong reaction to something related to the movie. So I’ll give it that. 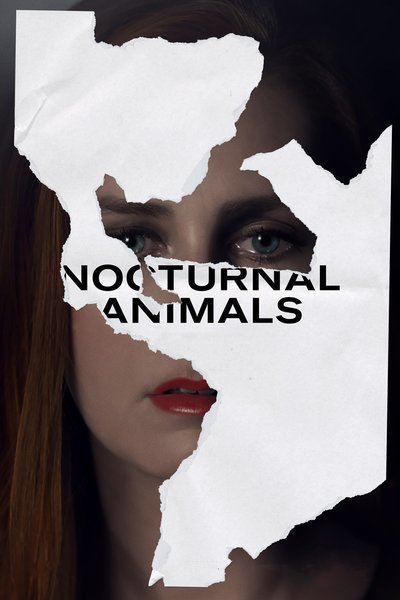 Writer (based on the novel "Tony and Susan" by)