The Chilean director Pablo Larrain gives the impression of aspiring to intellectual curiosity, political engagement, and committed anti-triviality. What a person aspires to and what he or she actually achieve are frequently extremely different things. I’ve seen three of Larrain’s features so far—“No,” “The Club,” and this one, about the Chilean poet and political figure—and the only thing I can say about him with near-absolute (subjective) certainty is that he’s a persistently humorless filmmaker. Andrew Sarris had a category for guys like this: “Strained Seriousness.”

“Neruda,” directed by Larrain from a script by Guillermo Calderón, begins in Chile just after World War II, and shows its title subject, a portly, bald-pated man who is not just a celebrated poet but also a Senator, enjoying all the perks of both positions. In the gigantic men’s lavatory of  the Senate building, he waxes pedantic to his colleagues. In his spacious house he hosts orgiastic costume parties; he dresses up as T.E. Lawrence at one. When asked to recite, he goes to a default verse, a famous one. As he performs grandiose and shallow postures, another presence makes itself known. In voiceover, an unseen enemy speaks of Neruda and his confreres: “They do not know what it is to sleep on the floor, but they are all red.” The railing against the Limousine Left is coming from a police detective named Óscar Peluchonneau, an anti-Communist whose sneers at Neruda and his kind will help fuel him once he’s assigned to arrest the poet after a government shakeup that turns circumstances against Neruda and his fellow Communists.

The portrait of Neruda that continues is very different from the kindly poet depicted in the once-popular film fable “Il Postino;” this movie gives Neruda his teeth back, while at the same time lording it over him. Seemingly obliged to seek exile even as he aches to speak on behalf of his country’s oppressed, he vacillates between bravery and peculiar cupidity. As he flees Peluchonneau’s dogged pursuit, he baits the policeman, sending him genre novels and making his varied escapes in a deliberate nick-of-time fashion. Once Peluchonneau catches up with Neruda’s wife, Delia, the woman has a surprise for him. Peluchonneau is not real, she tells him; he is a “supporting character” created by Neruda himself, to make the story of Neruda’s escape from Chile that much more thrilling. This revelation throws the detective for a loop, to say the least.

And the movie itself takes Delia at her word, depicting Peluchonneau’s mission in ever more melodramatic movie-movie fashion, depicting him goggled, riding in a motorcycle sidecar with bad mountainous-landscape rear-projection imagery behind him (shades of Guy Maddin). Larrain has cited the Argentinean fabulist Jorge Luis Borges as an influence, but this isn’t really Borges’ style of meta; and in any event a character becoming aware of his own fictional status goes back to Lewis Carroll if not farther.

The point of it all being that history and poetry are not possible without personified antimonies, real or imagined. “Neruda” does not make this point in any particularly convincing way, despite excellent performances by Luis Gnecco as the title character, a stolid Gael Garcia Bernal as his pursuer, and Mercedes Morán as Delia. “Neruda” is, like all the Larrain films I’ve seen, laudable in its ambitions and ultimately unsatisfying in its execution. 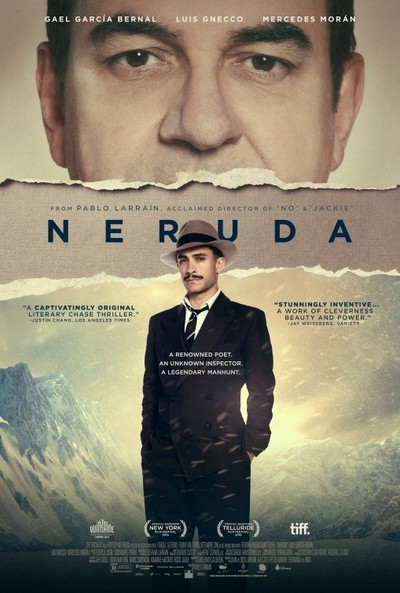 Rated R for sexuality/nudity and some language.