Laurence Stephen Lowry was a British artist who would eventually earn great renown for his paintings, many of which were inspired by the working-class neighborhood of Pendlebury, Lancashire, where he lived for over 40 years. His unique visual style, which was best exemplified by his depictions of the surrounding urban landscapes filled with so-called “matchstick men,” did not win him immediate success and for many years, he spent his days working as a rent collector by day and pursuing his artistic impulses in the attic at night. Although his story may lack the kind of grand flamboyance that one normally finds in biopics on artists, it is easy enough to imagine a reasonably engrossing work inspired by the man, his work and his desire to create art from the most unlikely of circumstances. Unfortunately, “Mrs. Lowry & Son” is not that movie. Instead, it takes his story and transforms it into a one-note and strangely listless work that brings together two of the most immensely talented actors working today—Timothy Spall and Vanessa Redgrave—and then fails to give them anything that might make actual worthwhile use of those talents.

To look at Lowry (Spall), one would hardly peg him as having anything resembling an artistic bone in his body—if there was anyone who could be said to be genetically disposed to be a rent collector in Pendlebury circa 1934, when the story takes place, Lowry is that person. And yet, while his outward artistic drive is as unassuming as the rest of him—his greatest elaboration of what he does comes at the beginning when he remarks “I paint what I see. I paint what I feel”—he does have the fever burning inside of him that is unleashed when he sits down in front of the canvas. Granted, his distinct style has not earned him much success or acclaim yet, but those reactions are of little concern to him. He is happy with himself and his work and is pleased to learn that an art dealer in London has expressed interest in his work and the possibility of putting on an exhibition. If you were to ask him how he felt about his artistic career, he might very well say that he was content and genuinely mean it.

Now if you asked his mother, Elizabeth (Redgrave), whom he lives with and dotes upon whenever he is not at work or in the attic, how she felt about her son’s artistic pursuits, she would give you a very different answer. Although frail and largely bed-ridden, she is perfectly capable of pulling herself together enough to repeatedly deride her son’s efforts and dismiss his artistic pursuits as a hobby that he should give up so as not to embarrass her. Elizabeth never lets an opportunity pass to remind Lowry of how meaningless she thinks his work is—she finds his subjects and style to be ugly and distasteful (when a painting of his receives a brutally dismissive review in the local newspaper, she makes sure to read the entire thing out loud to his face)—and when she is given proof that not everyone thinks that way, such as the letter from the art dealer, she assures him that letter frequently don’t actually mean what they say. (By comparison, Carrie White’s mother was far more encouraging in regards to getting her child off to the prom.) And yet, despite being a classist snob (it is indicated that Lowry is working at his stultifying rent collecting job to pay off debts incurred by his late father in order to allow Elizabeth to live the lifestyle she felt entitled to instead of one that was affordable) who belittles him at every opportunity, Lowry continues to care for her, even when her behavior towards him finally sends him to the point of throwing it all away after one particularly ugly tantrum.

When watching a biopic on an artist—especially one that I am not particularly familiar with—I am always hoping to discover enough about the artist and their process to justify the film’s basic existence. The weird thing about “Mrs. Lowry & Son” is that it is a film that seems to have very little interest in Lowry as a person and even less in him as an artist. In fact, it is not until the end credits begin that we actually get a shot of Lowry at his easel working. Now depicting the artistic process in visual terms, especially painting, is not always the easiest thing to do but it can be done. Recall Martin Scorsese’s “Life Lessons” segment from “New York Stories” or “Mr. Turner,” Mike Leigh’s impressive look at British artist JMW Turner which also starred Spall. Here, director Adrian Noble doesn’t even try to make things interesting from a visual standpoint, instead electing to set virtually the entire thing—save for the occasional flashback or brief excursion outside—in Elizabeth’s bedroom, where she can more comfortably destroy her son’s budding ambitions as a way of compensating for her own thwarted artistic dreams. Put it this way, when I learned afterwards that Noble is a stage director making his film debut and “Mrs. Lowry & Son” was itself based on a stage play, I was not exactly surprised.

It still might have worked even as a stage bound drama if the screenplay by Martyn Hesford had supplied the necessary fireworks but is not the case either. The whole thing is just a dreary slog consisting of a seemingly endless series of scenes in which Elizabeth browbeats Lowry for being a talentless loser and he quietly bears the brunt of her cruelty until the inevitable climax. There is no insight into their deeply dysfunctional dynamic other than the most obvious observations and since there is little to the narrative other than their relationship (there is a couple living next door that seems to be important but whose presence is negligible at best), it becomes as suffocating to watch as it must have been for Lowry to endure.

Unless you are a L.S. Lowry fan of the highest order, the only reason to sit through “Mrs. Lowry & Son” is to watch actors as strong as Timothy Spall and Vanessa Redgrave going toe-to-toe for 90 minutes. Both acquit themselves well enough but when the highlight reels of their respective careers are assembled, this film is simply not going to have much of a place of prominence for either of them. They invest the words with as much meaning as possible but there is only so much they can do and you come away from it slightly resentful of how their gifts have been not so much wasted as improperly utilized. Why bring in two artists capable of supplying rich and detailed tapestries and then have them only deliver the simplest of sketches instead? 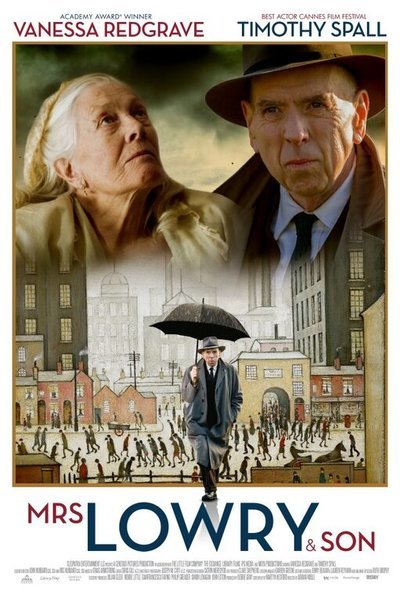