I'm not convinced that the world really needed a big budget, 3-D, feature-length reboot of the adventures of Mr. Peabody and his boy Sherman, but here it is.  It's better than OK, and a few elements sing; but overall it frustrates. Its delights come from its willingness to depart from formula, but formula still rules it.

The picture is based on the classic Jay Ward shorts that used to appear on Rocky and Bullwinkle's animated variety show, back during TV's late jurassic period. The film's director Rob Minkoff ("The Lion King") and his screenwriter Craig Wright ("Lost") don't knock themselves out trying to replicate every nuance. They've kept the central relationship between a genius dog (Ty Burrell) and his adopted human son (Max Charles), plus the time machine they travel in, and a few of Mr. Peabody's brazenly horrible puns (at one point the pooch tells his boy that Egypt's pyramids were designed by "some old Giza"). Everything else, though, has been ginned up, seemingly to bring "Mr. Peabody & Sherman" in line with American studio animation's unofficial house style. I'm referring to a familiar set of qualities developed during the Disney renaissance of the late '80s and early '90s, and perfected, if that is the word, by the "Shrek" series, and movies in a "Shrek"-like vein.

On Ward's series, the draughtsmanship was simple, and the characters were so barely-animated that they seemed to slide across the screen, like figures in a pop-up book. This movie, in contrast, goes for the glitzy, the state-of-the-art. The designs are highly stylized, but with incongruous elements. The realistic shadings and blockbuster action-film-style (virtual) camerawork seem at odds with the movie's Eisenhower-Kennedy era cars, clothes, hairstyles and architecture; ditto the characters with their Ward-style bobble-heads and sticklike bodies and arms. When Danny Elfman's sprightly-bombastic score swells and Mr. Peabody and Sherman zoom through snaky time-space wormholes a la "Star Trek" or "Contact," or race out of a collapsing tomb, or body surf through a network of sewer tunnels just ahead of raging flood waters or flame-clouds, it's as if rather slight source material had been injected with a hyper-dose of steroids that made it balloon grotesquely, creating bulges where bulges shouldn't be.

The humor seems off as well. The original show had a distinctively goofy and wry sensibility. It mixed historical factoids and Borscht Belt tomfoolery, with Mr. Peabody educating his boy Sherman on the culture and history of whatever society they happened to be disrupting, then getting them out of jams via Sherlock Holmes-style displays of icy super-competence. There's a fair bit of that in here, and it's marvelous. Peabody's math-driven approach to travel and escape is visualized with onscreen graphics, arrows and equations, and the name of Mr. Peabody's fancy mixed drink "Einstein on the Beach" is funny on at least two levels. It's hard to imagine how Ty Burrell's vocal performance as Peabody could be improved. Everything about it is exquisitely judged, from the way he sprints through Peabody's scientific exposition, but never so quickly that he confuses the viewer, to the way he unveils the dog's wretched puns (in Peabody's mind, he's underplaying the jokes, but to anyone listening, he's hammering them).

Considering that the movie's subtlest achievements are its most impressive, it's too bad that "Mr. Peabody & Sherman" felt obligated to be "awesome" every single second.  As "The Lego Movie" taught us, "awesome" has become a code word that means, "Let's collectively agree to pretend this isn't the same old thing we always experience, so that we don't feel sad and cheated." The problem isn't that the film is badly executed (by every current industry yardstick, it's aces) but that the filmmakers have taken something uncategorizable and revised in ways that make it more like everything else in multiplexes. The noise and scale mean that Ward's characters have to fight to seem charming and special, even though in quiet scenes you never question their charming specialness.

The film also displays a puzzling tone-deafness towards other eras and cultures, and towards women and girls. An early action sequence set in Egypt is visually splendid and has an agreeable "History of the World, Part 1" silliness (Mel Brooks makes the connection official with a vocal cameo later in the film, as Sigmund Freud). It's capped by a magnificently absurd routine in which the hero impersonates a god. But this same sequence trades in white-girl-imperiled-by-creepy-brown-men images. It also digs the film deeper into a sexist pit that I hoped it wouldn't fall into, even though the warning signs appear early.

Sherman's classmate and academic rival Penny Peterson (Ariel Winter) is nothing more than a grade-school version of Tracy Flick from "Election," prideful and spiteful and shallow where Sherman is humble, considerate and soulful.  When she goes to Peabody and Sherman's house with her parents, she becomes an even more irritating character, losing the grating competitiveness that made her dynamic as well as unlikable. She manipulates Peabody into showing her Sherman's time machine (against daddy dog's instructions) then gets kidnapped by the boy version of King Tut, mesmerized by his wealth, lured into marriage and prepped for sacrifice. She's just another annoying, self-involved chick causing problems for a lovable dude.

This is par for the gender-relations course in "Mr. Peabody & Sherman." None of the other women in the movie—including Penny's mom (voiced by Leslie Mann) and the plump spinster guidance counselor Miss Grunion (Allison Janney)—rise above mere shrew or foil. A sequence set in Egypt that finds Peabody, Sherman and Penny cavorting with Leonardo DaVinci (Stanley Tucci) makes the film's subordination of women official. Penny launches Leonardo's flying machine (against Sherman's wishes; notice the pattern?), but rather than revel in her ability to make action happen, the sequence has Penny turn over the mechanical bird's controls to Sherman, whom she delightedly describes as the first man ever to take flight.

The film's attempts to create "heart" are problematic, too, though understandable. Over the past 25 years, Disney, Pixar, Dreamworks and pretty much every other studio that makes animated films have made us expect a blend of slapstick, buddy comedy and overscaled action, and maybe a song or two if it's a musical, with a bit of hugging and learning, all wrapped up in a heart-shaped bow.  The filmmakers might have worried that they couldn't sustain a Jay Ward-style cool farce for 75 minutes, even an animated one—that viewers of all ages, conditioned by so many other animated pictures, would demand that their heartstrings be tugged regularly. Thus Peabody and Sherman's relationship, which remained largely unexplained in the TV series and was more amusing for being undefined, is here transformed into a half-baked parable of social difference, with Peabody, the dog raising an orphaned human, perhaps standing in for a single or gay or unacceptably metrosexual dad, or maybe an adoptive parent of a different race. (In a flashback sequence, an African-American judge, voiced by Dennis Haysbert, grants Peabody custody of the foundling child.)

If the movie had gone all the way with this notion and converted subtext into text, it might have distinguished itself as a total re-imagining of its source, rather than a mildly eccentric version of the same-old, same-old. It's a bit of a shame, really. "Mr. Peabody & Sherman" is a sweet movie, funny and essentially decent. But its failure to avoid the imaginative failures and regressive messages that plague so many other feature-length cartoons make it more disappointing, somehow, than more crass, mechanical film might have been. The eccentric touches give you hope for the movie. The movie dashes them. 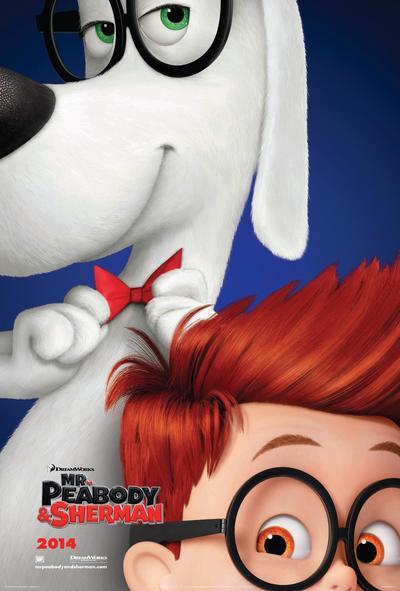