Because they are both aggressively quirky globe-trotting caper comedies involving missing works of art, both were made by hugely popular producer/stars allowed to indulge in their every possible whim, and both seem destined to share the same ignominious box-office fate (if the otherwise completely empty screening I attended is any indication), there is the distinct possibility that many of the reviews of "Mortdecai," at least those written by people with longer memories, may refer to it as being Johnny Depp's "Hudson Hawk." This is a patently unfair comparison to make and not just because I am one of those rare birds who actually found "Hudson Hawk" to be a fairly hilarious romp that will one day be rediscovered and properly worshipped. No, even if I hated that film as much as most people did back in the day, it would still stand head and shoulders above this absolutely bewildering waste of time, talent, energy and money.

The thing about bad movies is that in most cases, their badness is fairly self-explanatory in that you can quickly grasp what went wrong with them. A film like "The Boy Next Door," for example, is utterly inept but considering the fundamental stupidity of its basic premise, that result could hardly be considered a surprise. With other bad films, you can sort of understand what the intentions of the filmmakers might have been before things went wrong. "Mortdecai," on the other hand, is one of those rare birds that is so off-putting in so many ways that all I could do for the most part was wonder how so many presumably intelligent people could be persuaded to sign on to produce and appear in something that could not have possibly seemed like anything other than a total mess from its earliest stages.

Depp stars as Charlie Mortdecai, a borderline dissolute roué and cad who works as an art dealer of questionable means and morals who, as the film opens, owes the British government over 8 million pounds in back taxes and is in danger of losing everything, with the possible exception of his recently cultivated walrus-style mustache. One person who wouldn't mind seeing him lose the stache as well is his otherwise loving and infinitely patient wife Johanna (Gwyneth Paltrow), whose gag reflex goes into overdrive whenever she comes into close contact with the soup strainer in question, a trait that is sympathetically shared by both Mortdecai and, presumably, most members of the audience.

Because of his ability to navigate the seamier areas of the art world, Mortdecai is pressed into service by MI-6 agent (and long-standing rival for Johanna's affections) Martland (Ewan McGregor) to help in the search for a missing Goya painting that is even more valuable because of a rumor that it may have a code leading to a fortune in Nazi gold scribbled on its back. With his trusty manservant Jock Strapp--yes, Jock Strapp (Paul Bettany)--at his side, Mortdecai bounces back and forth between London, Moscow and Los Angeles on the trail of the painting and stumbles into one desperate escapade after another that usually results in Jock getting shot, stabbed or otherwise injured along the way. Meanwhile, Johanna begins her own pursuit of the painting as well and uses her wiles to get Martland, who still has a thing for her, to fork over important information along the way.

Based on the 1973 novel "Don't Point That Thing at Me," allegedly the first in a series of books featuring the Mortdecai character, "Mortdecai" is a film whose entire comedic foundation is based on two elements--funny-looking mustaches and Johnny Depp's ability to do a mildly passable impression of Terry-Thomas. I will concede that these two things could be amusing under the right circumstances but only for a short amount of time and certainly not for a seemingly endless 106 minutes. And yet, screenwriter Eric Aronson keeps coming back to those particular wells over and over despite having thoroughly mined whatever comedic ore they might have held after the first five minutes. Beyond that, the screenplay is a ghastly collection of self-consciously plummy dialogue, jokes that aren't so much ribald as rabid, and, when all else fails, various forms of gagging and/or vomiting. Trying and failing to make something out it all is director David Koepp ("Premium Rush"), who knows how to direct smart, canny entertainments, but who hasn't done so here.

As for Johnny Depp, he delivers another one of the self-consciously campy turns that he has been giving viewers in lieu of an actual performances--not only is it a one-joke characterization, the joke is on the level of a below-average knock-knock joke. Like the film as a whole, this performance is such a spectacular miscalculation that it begins to generate a strange fascination in that you almost want to keep watching just to see how much worse it can possibly get before it finally comes to a merciful and long-overdue conclusion. While Depp is delivering enough bad acting for at least four movies, his co-stars (beyond those already cited, Jeff Goldblum and Olivia Munn also turn up as a sleazy American art dealer and his nymphomaniac daughter) barely bother to make anything resembling an effort, perhaps in the belief that if they do as little as possible, no one will notice that they are even there amidst Depp's flailings.

When the definitive biography of Johnny Depp is finally written, I know that I will immediately turn to the chapter focusing on "Mortdecai" so that I can finally figure out what in God's name he and everyone else involved was thinking when they made it. My guess is that it will prove to be far more entertaining and interesting than the film itself. 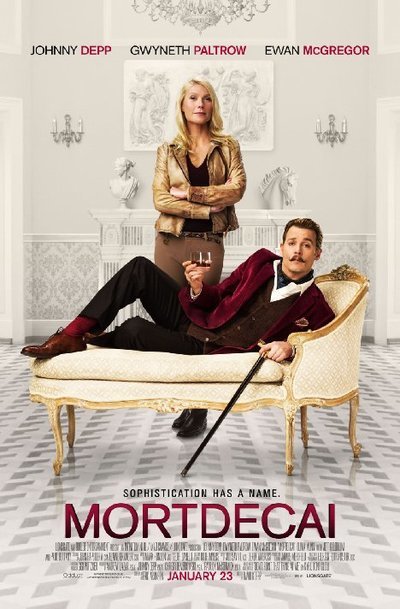