If movie houses still existed that catered to messy, close-to-incoherent, boundary-pushing enterprises best enjoyed at rowdy midnight showings after imbibing a mood-altering substance or two, “Moonwalkers“ would be a likely candidate to find a following. From a pseudo psychedelic-era London backdrop to a premise predicated upon the conspiracy theory that Stanley Kubrick relied on his “2001: A Space Odyssey” know-how to fake footage of the first manned moon landing by Apollo 11 in 1969, there is much to lure an indulgent audience with a penchant for the offbeat.

Not that it is particularly well-done. But there is much madness to be found both onscreen and in the frustrating way that noted maker of TV ads and first-time filmmaker Antoine Bardou-Jacquet tosses all matter of discordant distractions at us while stretching a thin plot to ridiculous limits.

At least a game Ron Perlman somewhat anchors this nonsense mostly by the sheer physical force of his leonine features and redwood-like build. He wisely underplays his CIA operative who is struggling with PTSD from his experiences in Vietnam (basically, he is prone to hallucinate dead people in various states of decay). For whatever reason, this haunted soul is called upon by nervous American government types to hunt down Kubrick in England and offer him a goodly sum to produce the hoax just in case the mission fails and Neil Armstrong doesn’t actually take his giant leap for mankind.

Rupert Grint, still finding his post-Hogwarts footing as an adult actor in a part much better suited to the likes of Rhys Ifans, is stuck in a straight-man role as an ineffectual manager of a struggling rock band. Unfortunately, he owes a considerable amount of cash to a nasty mobster with a gaggle of dandified gun-toting flunkies who invested in his ill-conceived musical venture. By virtue of several cases of mistaken identity, Grint pretends to be Kubrick’s agent and passes off his hirsute junkie roommate as the esteemed director. The mobster soon learns of Grint’s sudden ill-gotten gains from this ruse, Perlman realizes he has been duped and clunky chaos ensues.

Much of the so-called humor is of the crude and vulgar variety, such as this observation after a round of magic mushrooms is consumed: “I feel like my penis is whispering to me.” When Grint convinces Perlman to hire a pretentious avant-garde director (played by Tom Audenaert) to shoot the phony landing on a sound stage, we get to witness a questionable visual gag of a giant poster-like mural of a naked woman spreading her legs while her vagina provides the entrance to an old stone building that houses a hippie commune. The last film that I know of that tried to get away with this sort of gag was “Patch Adams.” Make of that what you will.

At least Bardou-Jacquet attempts to achieve some cleverness by referencing the rest of Kubrick’s resume. But he chooses the wrong film as his template. Instead of borrowing from the absurdist finesse that marks “Dr. Strangelove," his main reference point is “A Clockwork Orange,” including a sex-doll coffee table and Perlman’s droogish outburst of ultra-violence (most notably, exploding heads) involving thuggish bikers that is accompanied by Rossini’s “The Thieving Magpie.”

And as much as I enjoyed the opening credit sequence featuring animation that recalls both Peter Max’s artwork and “Yellow Submarine” with undulating landscapes of various ‘60s-appropriate imagery, I found myself becoming increasingly astonished and annoyed by the near-dearth of female characters in the cast for nearly the first two-thirds of “Moonwalkers.”

The love-in atmosphere at the commune employs plenty of background party babes topless or otherwise to serve the needs of the men roaming about. But only one—Rose Byrne-lookalike Erika Sainte as Ella—makes any real impression despite only a handful of lines. And that comes when she tries to tempt Perlman while sucking on a frozen treat in a suggestive manner much like Sue Lyon and her lollipop in Kubrick’s “Lolita.”

Forget a fake moon landing. “Moonwalkers” is a fake comedy, one that mistakes an endless bloody splatter-fest of a finale for the height of hilarity and never quite gets off the ground after takeoff. 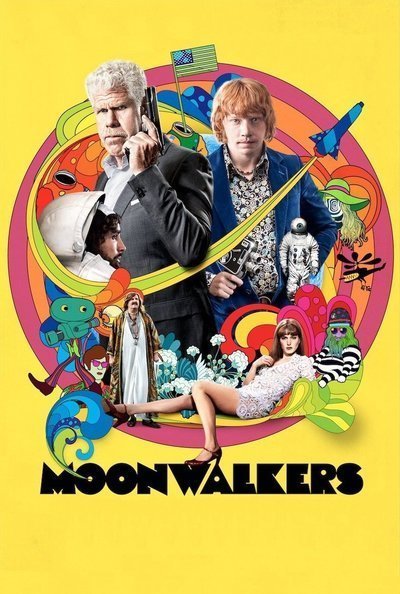