When the moon hits your eye, like a big-a pizza pie - that’s amore! - Dean Martin The most enchanting quality about “Moonstuck” is the hardest to describe, and that is the movie’s tone. Reviews of the movie tend to make it sound like a madcap ethnic comedy, and that it is. But there is something more here, a certain bittersweet yearning that comes across as ineffably romantic, and a certain magical quality that is reflected in the film’s title.

The movie stars Cher, as an Italian-American widow in her late 30s, but she is not the only moonstruck one in the film. There is the moonlit night, for example, that her wise, cynical mother (Olympia Dukakis) goes out for dinner by herself, and meets a middle-age university professor (John Mahoney) who specializes in seducing his young students, but who finds in this mature woman a certain undeniable sexuality. There is the furtive and yet somehow sweet affair that Cher’s father (Vincent Gardenia) has been carrying on for years with the ripe, disillusioned Anita Gillette.

And at the heart of the story, there is Cher’s astonishing discovery that she is still capable of love. As the movie opens, she becomes engaged to Mr. Johnny Cammareri (Danny Aiello), not so much out of love as out of weariness. But after he flies to Sicily to be at the bedside of his dying mother, she goes to talk to Mr. Johnny’s estranged younger brother (Nicolas Cage), and is thunderstruck when they are drawn almost instantly into a passionate embrace.

“Moonstruck” was directed by Norman Jewison and written by John Patrick Shanley, and one of their accomplishments is to allow the film to be about all of these people (and several more, besides). This is an ensemble comedy, and a lot of the laughs grow out of the sense of family that Jewison and Shanley create. There are small, hilarious moments involving the exasperation that Dukakis feels for her ancient father-in-law (Feodor Chaliapin), who lives upstairs with his dogs. (In the course of a family dinner, she volunteers, “Feed one more bite of my food to your dogs, old man, and I'll kick you to death!”) As Cher’s absent fiance lingers at his mother’s bedside, Cher and Cage grow even more desperately passionate, and Cher learns the secret of the hatred between the two brothers: One day Aiello made Cage look the wrong way at the wrong time, and he lost his hand in a bread-slicer. Now he wears an artificial hand and carries an implacable grudge in his heart.

But grudges and vendettas and old wounds and hatreds are everywhere in this film. The mother knows, for example, that her husband is having an affair. She asks from the bottom of her heart why this should be so, and a friend replies, “Because he is afraid of dying.” She sees at once that this is so. But does that cause her to sympathize with her husband? Hardly. One night he comes home. She asks where he has been. He replies, “Nowhere.” She tells him she wants him to know one thing: “No matter where you go, or what you do - you're gonna die.” Some of these moments are so charged with tension they remind us of the great opening scenes of “Saturday Night Fever” (and the mother from that movie, Julie Bovasso, is on hand here, as an aunt). But all of the passion is drained of its potential for hurt, somehow, by the influence of the moon, which has enchanted these people and protects them from the consequences of their frailties. Jewison captures some of the same qualities of Ingmar Bergman’s “Smiles of a Summer Night,” in which nature itself conspires with lovers to bring about their happiness.

The movie is filled with fine performances - by Cher, never funnier or more assured; by Dukakis and Gardenia, as her parents, whose love runs as deep as their exasperation, and by Cage as the hapless, angry brother, who is so filled with hurts that he has lost track of what caused them. In its warmth and in its enchantment, as well as in its laughs, this is the best comedy in a long time. 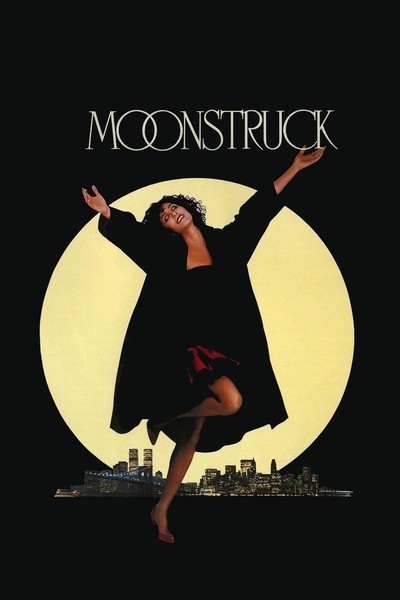