Noah Baumbach has been making movies for twenty years now, and they've nearly always been comedies of the sort that I call "radio with pictures"—not because of any inherent lack of filmmaking skill (he's quite a good director) but because his characters are often so deluded or bitter or ignorant or self-aggrandizing or otherwise unpleasant that I find myself watching certain scenes through the cracks between my fingers. "Kicking and Screaming," "Mr. Jealousy," "The Squid and the Whale," "Margot at the Wedding" and "Greenberg" were all picture-radio incarnate: astute at detailing the sorts of people you try to avoid at parties (or who try to avoid you, maybe?) and at times unnervingly willing to stick the knife into characters, and you, and twist it.

Baumbach's collaborations since hooking up with onetime costar and now collaborator Greta Gerwig—whom he first worked with on "Greenberg"—have changed his tone. His movies are now slightly less scathing and a bit more accessible, but without for one moment sending the message that he's suddenly become nice and sweet. They feel even more like mid-period Woody Allen films than they already did, although Baumbach, like a lot of dialogue-driven American filmmakers, owes so much to Allen that this might have been inevitable no matter who he worked with. His latest, "Mistress America," gives Gerwig the sort of role that Diane Keaton would have knocked out of the park for Allen: Brooke, an almost-thirtysomething New Yorker who talks and talks without every actually seeming to listen, much less connect, with anyone else, and who wants to be influential and famous and successful but doesn't seem to have any sort of realistic plan for achieving that, or any particular talents to bring to bear on her goal.

Brooke isn't the main character of the film, though: that would be Tracy Fishcoe (Lola Kirke), a Columbia University student whose mother, Stevie (Kathryn Erbe), is about to marry Brooke's widowed dad. Tracy is an incoming freshman who doesn't know anyone in New York; she's never met Brooke, but her mom hopes Brooke will bond with her and become a companion or even mentor to her, and urges her daughter to make it happen.

Baumbach can be a marvelous, unsparing reporter on a certain slice of upper-middle-class to wealthy America. He brings that skill to bear here in the scenes of Tracy feeling out of her element. The satirical details of college student delusions of grandeur are expertly observed by Baumbach and his co-writer Gerwig, particularly the competition to get into a literary society that taps its new members by hitting them in the face with pies, then hands them briefcases to carry as emblems of their specialness. Brooke, her too-competitive classmate Tony (Matthew Shear), and Tony’s dour girlfriend Nicolette (Jasmine Cephas Jones) are all sharply observed. Like many Baumbach characters, they're entitled and oblivious. They fantasize about skipping to the head of the cultural line, maybe collecting that Nobel for literature before they hit the big three-o. At the same time, the movie has trace elements of sympathy for the lonely and alienated: the scene where Tracy eats alone in a booth at a restaurant from a takeout container while listening to Paul McCartney's "No More Lonely Nights" on the PA system and pondering her cracked cell phone screen captures minor-key depression perfectly.

Once Brooke whirls into the story, things take a turn for the madcap. She comes on like a classic Diane Keaton beautiful kook—imagine Annie Hall by way of the character in "Love and Death" who insists that subjectivity is objective—but there's a specificity to her that's uniquely maddening. She and Tracy match up in the a way that they probably both think is marvelous but that soon shows its downside. They aren't really talking to each other, but having adjacent monologues, with each waiting for a turn to chime in and talk about themselves. Gerwig and Baumbach's dialogue here nails this social class' self-aggrandizement with surgical precision. Brooke describes herself as an "autodidact" and adds, "that word is one of the words I self-taught myself!" She works casual mentions of her dead mother into unrelated conversations ("That's cool about the frozen yogurt machine...everyone I love dies"). She knocks her skull with her knuckles for good luck and brags about her newfound appreciation for "the social media," which she hopes to parlay into making her dreams, whatever they are, come true.

Brooke is the kind of person that you think of as a "young spirit" if you yourself are young and don't know any better. She calls herself a "curator," a word that people use to describe themselves when they have no talent or skill. She talks about turning a cramped and awkward space into a combination restaurant, coffee shop and cultural crossroads called "Mom's" (of course). She's going to fund this venture by tracking down an ex-boyfriend named Dylan (Michael Chernus of "Orange is the New Black") and the wife, Mimi Clare (Heather Lind), that Brooke claims stole Dylan away from her, along with an idea that later proved lucrative. Brooke says this whole gambit is about redressing grievance, but if you've watched her for more than five minutes you know she's unreliable, and that unflattering details will come out soon enough.

Baumbach has said that he had movies like "Something Wild" in mind while writing the script with Gerwig, and the film does have a touch of that formula, with Brooke as a variation of the "life force" character leading a more straitlaced narrator, Tracy, plus the increasingly unhappy Tony and Nicolette, on a whirlwind misadventure. There's a parallel story about Tracy developing the ruthlessness necessary to translate life into meaningful art. Of all the Columbia kids we meet, only she seems to have the stuff to become a credible writer of realistic fiction. Some of the snippets we hear in voice-over of "Mistress America," a short-story-in-progress about Brooke, do suggest talent, plus an acuity that would make Brooke uncomfortable were she to read the finished piece. "Her beauty was that rare kind that made you want to look more like yourself and not like her," says one of the more flattering lines, but at another moment she accurately describes the Brooke character as an exhausting, tragically limited person who uses others and bounces from one misconceived venture to another and seems incapable of looking inward. Other people, Tracy writes, avoided her because "they could feel her failure coming."

"Mistress America" is a very funny and observant movie, albeit squirm-inducing, with quotable dialogue. "X doesn't roll like that," Brooke tells a student that she's tutoring in math, "because X can't be pinned down." The movie starts to crater as soon as Brooke and Tracy and company end up at the modernist house where Dylan and Mimi Clare live, and find Mimi Clare overseeing a reading group for pregnant women; there are some good bits involving a pot stash and a Chipwich and literary affectations, but the length of the sequence, coupled with its essentially static nature, makes the film feel too much like a low-budget talk-fest in which everyone resolves their issues through monologues and revelations. Up until that point, though, it's a breezy and occasionally bracing movie, fun to watch if you're a bit of a masochist, or if you've ever suffered through a weekend or even an hour with people like these, and wondered why you can't hate them, and realized that it's because you probably see a little bit of yourself in them and it scares you. 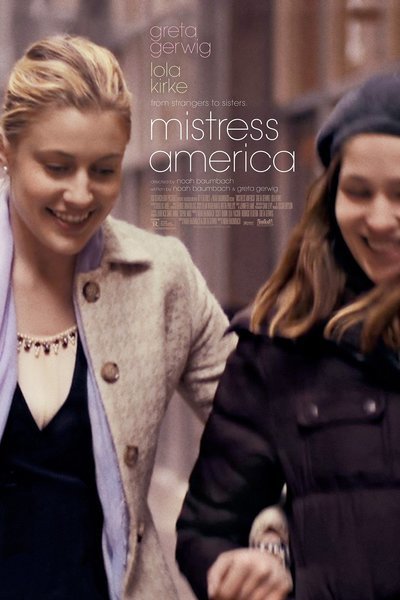