Great action movies develop a rhythm like no other genre. Think of the way the stunts in “Mad Max: Fury Road” become a part of the storytelling. Think of how “Die Hard” flows so smoothly from scene to scene, making us feel like we’re right there with John McClane. Think of the dazzling editing of “Baby Driver” and the way it incorporates sound design, music, and action into a seamless fabric that’s toe-tapping. It’s obviously incredible praise to say that “Mission: Impossible – Fallout” reminds me of these films. It’s got that finely-tuned, perfect blend of every technical element that it takes to make a great action film, all in service of a fantastic script and anchored by great action performances to not just work within the genre but to transcend it. This is one of the best movies of the year.

For the first time in this franchise, director Christopher McQuarrie has made what is basically a direct sequel to the previous film, “Mission: Impossible – Rogue Nation.” Wasting absolutely no time, “Fallout” drops viewers into the narrative, getting the important details out of the way so the action can get started. So many action movies spend forever with monologuing villains and extensive set-ups. But there’s no fat on this movie, even early on, where action so often takes too long to get to the “good stuff,” and definitely not late when the movie is intense enough to leave you exhausted.

A group called the Apostles wants to create chaos. That’s really all you need to know. They have a belief that suffering leads to peace, and so it’s time to unleash the pain. They have been working with someone clearly on the inside at IMF code-named John Lark and have conspired to obtain weapons-grade plutonium to create three dirty bombs. Ethan Hunt (Tom Cruise) has to get the plutonium back, but there’s a ghost haunting him in the form of Solomon Lane (Sean Harris), the villain from the last film who Hunt left alive instead of killing. The head of the Syndicate has been passed around intelligence agencies, looking for information on the IMF Agent-killing group, but he’s also a part of this new plot to end the world.

As the movie opens, Hunt is tasked by his boss Alan Hunley (Alec Baldwin) to go to Paris to find John Lark before he buys the plutonium. He is handed a sidekick by Alan’s superior Erica Sloan (Angela Bassett) in the form of the brutish August Walker (Henry Cavill). Sloan isn’t sure she trusts Hunt or Hunley, and so wants one of her own men on the crucial mission, someone she knows will do whatever it takes to complete the mission. There’s a thematic undercurrent through “Fallout” as to how much one should be willing to sacrifice for the greater good—the classic spy flick question of killing someone you love to save the lives of millions you don’t (it’s the action movie equivalent of “The Trolley Problem”). The implication is that Hunt is too protective of those he loves, while Walker loves no one, and the movie vacillates in fascinating ways as to which modus operandi is better for a super-spy. Hunt is even described as the ‘scalpel’ to Walker’s ‘hammer.’

This dynamic duo heads to Paris—and are joined before long by familiar faces like Luther (Ving Rhames), Benji (Simon Pegg) and Ilsa (Rebecca Ferguson)—and, well, things get deadly fast. “Fallout” is one of those excellent action movies that works whether you pay attention to the plot or not. It is one of the most streamlined and fast-paced films in Hollywood history, moving from one set piece to the next. Don’t worry. There’s a plot. And it’s actually an interesting one that feels both timeless and current in the way that it plays with loyalty and identity. But McQuarrie and Cruise are keenly aware that they can’t lean too heavily on the plot or people will lose interest. We don’t need speeches. And so the dramatic stakes of the set-up are pretty much enough. Nuclear bombs, a double agent or two, a homicidal mastermind—now go!

And, man, does “Fallout” go. Roughly seven of the ten best action sequences of the year will be from this film. There’s a wonderful diversity in action styles too from a skydiving nightmare to a car chase to, of course, a “Run Tom!” scene to the already-famous helicopter sequence. All of them feature an intensity of movement that we hardly see in action movies anymore. Critics have already compared the film to “Fury Road” and I think that’s why—the fluidity of motion that you see in both films. The great cinematographer Rob Hardy (“Annihilation”) and editor Eddie Hamilton (who did the last movie as well) have refined the action here with McQuarrie in such a perfect way. We rarely lose the geography of scenes—which is so common in bad action—and often feel like we’re falling, speeding, or running with Hunt. The audience I saw it with was gasping and nervously laughing with each heart-racing sequence. See this one with a crowd. And as big as you can (some of the footage was shot in IMAX, and it’s worth the upcharge).

“Fallout” isn’t the kind of film one often gets pumped for in regard to performance, but even those are better than average here. It’s fascinating to see how Cruise is finally allowing his age to show a little bit, especially in early scenes with Cavill, who looks like a tougher, stronger model of Ethan Hunt. Cruise's latest version of Hunt stumbles a few times and his punches don’t land with the force of Walker’s. It instills more relatability in a character who would have been less interesting as a superhuman spy. And the supporting cast is uniformly strong, especially Cavill and Rebecca Ferguson, who has the screen charisma of someone who really should be a superstar by now. Let’s make that happen.

It’s easy to get cynical at the movies. With eight sequels in the top ten last week, more and more people see the Hollywood machine as just that, something that spits out product instead of art or even entertainment. Perhaps the best thing I can say about “Mission: Impossible – Fallout” is that it destroys cynicism. It truly does what so many people have looked for in entertainment for over a century—a chance for real-world worries to take a back seat for a couple hours. You’ll be too busy worrying how Ethan Hunt is going to get out of this one to care about anything outside the theater. It's a rare action movie that can do that so well that you not only escape but walk out kind of invigorated and ready to take on the world. “Mission: Impossible – Fallout” is one of those movies. 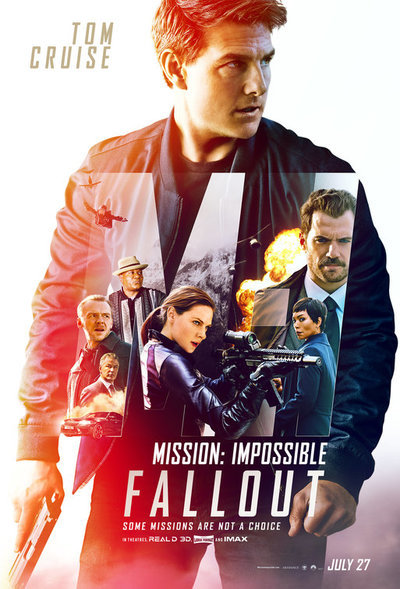