The trouble with "Million Dollar Arm" is not limited to its title, which suggests a cheesy horror thriller about an overpriced artificial appendage that is coming to get you. This supposedly uplifting true-life baseball tale never quite strikes the necessary emotional sweet spots that these types of inspirational sports movies shamelessly if effectively milk, despite a pitch with great potential: Opportunistic sports agent out to save his struggling company attempts to sniff out untapped baseball talent in far-off India by staging a reality TV-show contest.

The plot suggests an intriguing triple play that combines the outside-of-box thinking of "Moneyball," the can-do gumption of "Jerry Maguire" and the mass-of-humanity chaos of "Slumdog Millionaire" underscored with music by the Oscar-winning A.R. Rahman. And for about half the movie, it almost succeeds.

But there is a gaping hole where "Million Dollar Arm"’s heart should be that widens to crater-size in the second half. And that hole is named JB Bernstein (Jon Hamm), a self-centered, arrogant serial model-dater who exhibits a near-sociopathic lack of concern for the welfare of others. For some reason, we are asked to cheer for this exploiter of two sheltered teen athletes as he drags them from their small Indian villages, flies them to Los Angeles and then expects them to sit around his coldly contemporary high-priced bachelor pad in between training sessions for a major league tryout.

They don’t speak English. They know next to nothing about the game they are supposed to be playing at professional levels. They don’t even know how elevators work. Yet they remain steadfastly loyal to “Mr. JB, Sir,” a man who does little to help them to overcome their culture shock and homesickness save for tossing them a couple of power bars for breakfast every day.

By all rights, this movie should belong to Bernstein’s discoveries, the inscrutable Dinesh (Madhur Mittal, who was Dev Patel’s criminal brother in "Slumdog") and outgoing Rinku (Suraj Sharma, the star of "Life of Pi"). If the audience is pulling for anyone, it is these two brave strangers in a strange land. Although the 2008 sports drama "Sugar" already explored this fertile ground in its story of a Dominican baseball player, it still would be a more enriching account.

At least with his just-so jaw stubble and shark-like smile, Jon Hamm keeps us watching initially as he steps up to the plate and makes his case for a post-"Mad Men" career as a leading man on the big screen. In a way, it helps that his Bernstein is cut from the same smooth-talking seductive cloth as his ad whiz Don Draper.

I didn’t even mind the incredibly corny “a-ha” moment when Bernstein, feeling defeated after losing a major client, mindlessly flips through TV channels. He suddenly spies Susan Boyle performing her astonishing rendition of "I Dreamed a Dream" on "Britain’s Got Talent" before switching over to a channel showing a cricket match. A couple back and forths with the remote, and he concocts the idea of inviting young Indian players to compete for a chance to become the next great MLB pitcher.

Just ignore the fact that Boyle’s 2009 performance aired a year after the "Million Dollar Arm" contest first came into being. Screenwriter Tom McCarthy –whose previous storytelling efforts such as "Win Win" and "The Visitor" were several steps above what he serves up here—certainly did.

The scenic trip to Mumbai and beyond that follows, including auditions right next to the Taj Mahal, proves diverting enough to mask most of Bernstein’s severest character flaws. It’s only when he is back home that he becomes nearly impossible to tolerate—until an implausible though entirely predictable third-act conversion suddenly has him turning into a patriarchal Mr. Sensitive.

It isn’t exactly a good sign that scene-stealer first class Alan Arkin grouchily naps through most of his early scenes as baseball scout Ray Poitevint, who assists with finding the fresh recruits. Still, a snoozing Arkin is better than most awake actors, and Poitevint’s ability to hear how fast a pitch is thrown turns into one of "Million Dollar Arm"’s better shticks.

Besides Arkin, the ever-reliable Bill Paxton shows up as Tom House, a rule-breaking Zen master of a coach. Asif Mandvi of "The Daily Show" plays Aash, the practical yin to Bernstein’s pie-in-the-sky yang as his American business partner of Indian descent. Pocket-size Bollywood star Pitobash is baseball fanatic Amit, who basically volunteers to be Bernstein’s unpaid intern, manages to not overdo the cute factor in what would have been called a "Bronson Pinchot Role" a couple decades ago. And, most importantly, there is Lake Bell, whose warm and inviting presence provides a much-needed female counter balance as Bernstein’s lissome med-student tenant next door.

What is the final score for "Million Dollar Arm"? It may earn a few runs early in the game, but is far from a satisfying grand slam of family entertainment. 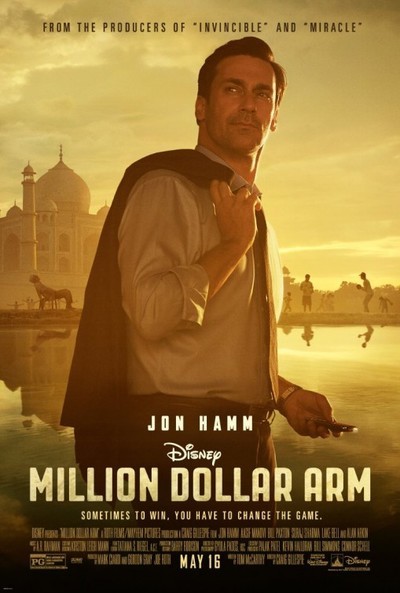 Rated PG for mild language and some suggestive content

Jon Hamm as J. B. Bernstein