“Midnight in the Switchgrass” is the type of crime thriller that’s so full of cliches that it becomes one big cliche itself. A few cops investigate a serial predator before its too late; a director tries to be taken seriously by throwing in a bunch of bleak material; Bruce Willis shows up, barely. It marks the directorial debut of prolific producer Randall Emmett, who has given us a whole lot of glossy DTV junky movies that look exactly like this one and also have Willis’ soul trapped inside them (recently: “Out of Death,” “Survive the Night,” “Hard Kill”). The least cliché part, to be fair, is in how creepy this film’s intentions are.

If there’s one thing that this film loves more than images of switchgrass blowing in the wind, waiting for something, anything, to happen, it’s images of young women being choked, tortured, and bound up, etc. It is very good at making time for all of the above. Call it character development for a movie based on a real serial killer, but the psychosexual stuff becomes openly gratuitous when it adds up to little and takes up so much space next to the most rote cop plot imaginable. Alan Horsnail's script isn't exactly a James Patterson-like intricate investigation, nor is it about rooting for a nearly naked 16-year-old to survive her captivity. We are hardly given any connection to her than witnessing her suffering, and the scenes spread throughout are not even depraved in an artistic fashion, in a way that effective sleaze can be. But it is what we know plenty about—that this guy Peter (played by Lukas Haas) is very sick, with his victim's bodies scattered around Pensacola, their clothes hidden away for his sniffing, and Emmett wants to watch him.

In between all of the villainous stuff, in which Haas does prove to be a surprising choice for such grossness, a few broadly drawn heroes try to catch Peter. A Florida state cop (Emile Hirsch) is investigating a set of murders in and around Pensacola, involving sex workers and women who are being trafficked. At the same time, an FBI agent named Lombardo (Megan Fox) is working undercover trying to find this killer, at the behest of her older partner Helter (Bruce Willis). In a couple of scenes for the fans, Fox is seen beating up and getting answers from a pimp played by her real-life off-screen partner Colson Baker (they met on set). These moments are especially cartoonish, and while they offer little in terms of capable fight choreography or cohesive editing for said scuffling, they at least have a madcap energy that otherwise does not exist here.

“Midnight in the Switchgrass” is blatantly filled with a lot of hot air when it’s not feigning cat-and-mouse; not even the costume department could muster more than a couple patches for Hirsch’s laughable cop uniform. There’s a lot of barking about jurisdiction, involving a moment where Crawford, his boss, Lombardo and Helter have a “what are you doing in my crime scene?” meet-cute. Crawford isn’t supposed to work the case because it’s not his circle; Lombardo isn't supposed to work undercover because “Operation Highway” has been shut down, and she’ll get killed. They decide to overcome these problems related to their employers by working together to catch Peter, her with her online connection to this predator, and him with his overly serious squinty eye line-delivery about how “nobody cares about these girls.” Guess what happens to Lombardo?

This movie is a skeezy, lazy trap, but at least Fox breaks out of it. She sits opposite Willis—who cannot even create an emotional consistency between two sentences—and she tries to bring life-or-death cop jargon back to life. The entire atmosphere she’s working with is terrible, and among Emmett's foolish choices, including Fox in his list of elements to underestimate is the most glaring. While “Midnight in the Switchgrass” reminds us why people need projects like this to stay relevant among their low standards, it also affirms why Fox is primed for bigger, infinitely better projects. She has the power to make even something like “Midnight in the Switchgrass” resemble a real movie. 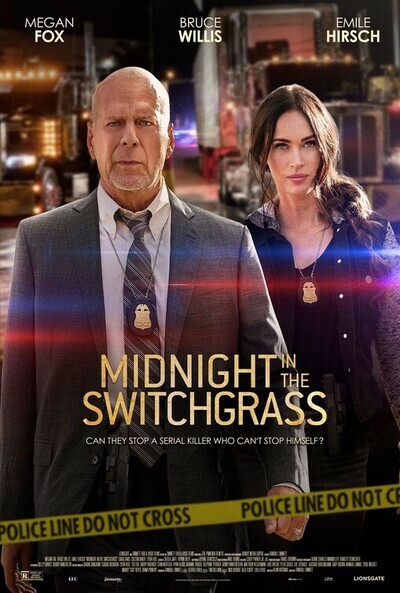 Midnight in the Switchgrass (2021)