You’ve got to lower the bar for a cliche-at-best thriller like “Survive the Night.” If it keeps you awake, consider that a success.

Bruce Willis appears in some scenes as Frank, a retired sheriff whose countryside home is invaded by two violent but closely bonded brothers in need of a surgeon after shooting up a gas station. Mathias (Tyler Jon Olson) got a nasty wound in the leg when the attendant returned fire, and it’s up to his less-stable brother Jamie (Shea Buckner) to find someone to do a homemade operation. The closely bonded brothers were supposed to flee in Mexico after some robbery we don't see, but Jamie just had to go and shoot up a random pit stop on their journey.

But before this, Matt Eskandari's “Survive the Night” feigns the drama of a bond between tough-love Frank (Willis) and his medical professional son Rich (Chad Michael Murray). Slumped onto a rocking chair, Willis takes some angsty sips of iced tea and then barks at Rich for being a loser, because it’s Rich’s error during an emergency operation that lead to Rich being sued and having to move his wife and daughter in with Frank and his wife. Murray invests in this macho soap opera a bit, but the scene has the same takeaway as a later scene where Willis suddenly has a private, tearful self-reckoning—it feels completely phony.

Then the brothers show up, having trailed Rich back from a hospital gig. Jamie forces Rich at gunpoint to perform a makeshift surgery on Mathias while Rich's own family is tied up (including scowling, mostly silent Frank). This is where the movie's false marketing is especially tedious—there are no AK-47s and masked men here as on the poster, but just two freaked out, grungy brothers armed with handguns, desperate for a solution, but who can’t even pump gas without killing someone. Yet even with these grounded stakes, in which whoever has the gun has the power, the script tediously see-saws between moments in which Rich and his family are free and fighting, or whether they’re tied up again, the operation resuming. You could almost dream for something more about any human's capacity for pain, but, all you'll get are variations on "Put the gun down!"

For such a grit-less, haphazardly edited, and overly gray movie, “Survive the Night” barely even provides when it comes to those jolts of testosterone these types of movies can be readily distilled to. A car chase looks more like a truck simply trailing a sports car on a muddy road; the same lack of pizzazz goes with brief bursts of violence, where it can be hard to tell what exactly just happened because a shot or two got lost. Instead, “Survive the Night” can only best express itself in close-ups of Mathias' impressively nasty wound, or grunts and howls from the men who address their own surprise bullet holes. Willis' supporting cast does some visible work to sell this frantic course of events, but Doug Wolfe's script makes obvious its limited emotional range, with roughly a million moments where the brothers comfort each other with fantasies of a beach house in Mexico.

And then there’s Willis—the appearance of someone with his legacy should be a boost, instead it’s a reminder of how you’re trying to invest in something he clearly didn’t have fun making. There’s just nothing interesting about the time he spends clearly rotating with his stunt double, despite all the gravitas behind Willis’ history of playing dads, cops, wounded men. Willis' performance choices are totally and merely functional, dispensing dialogue as if he had an on-and-off switch. And there's nothing behind that furrowed brow and steely gaze, one that used to proclaim "You don't want to mess with me" in a movie like the now 25-years-old "Die Hard with a Vengeance." Watching Willis in “Survive the Night,” you’d think he was already dead. 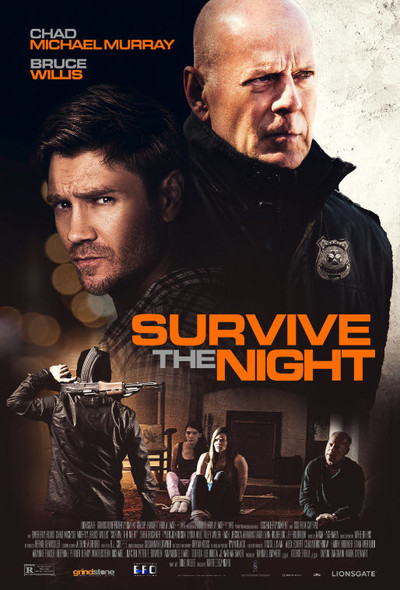 Rated R for violence, bloody images and language throughout.