What do the deniers of climate change and apologists for big tobacco have in common? Spokespeople sent into the media to sow doubt.

Director Robert Kenner ("Food, Inc.") and his cowriter Kim Roberts lay it all out for us in "Merchants of Doubt," a compendium of public deceptions based on the same-titled book by science historians Naomi Oreskes and Erik Conway. The story begins in the 1950s with the tobacco industry's strategy for staving off government regulation, then moves on through the decades. The film shows how public relations strategies devised to make the public doubt that cigarettes caused cancer were refined into a template that would be used by industries selling all sorts of materials and products, including food and food additives, pharmaceuticals, oil, coal, asbestos, and flame retardant chemicals used on furniture coverings. The latter is the focus of the movie's strongest section, which shows how the tobacco industry's obscuring tactics were applied to another industry's PR problems.

In the 1950s, when scientists first linked cigarettes to cancer, the public relations firm of Hill & Knowlton created what turned out to be a winning strategy: augmenting the direct lies of tobacco industry executives and spokespeople with "third party" testimonies by people who seemed to have no dog in the hunt but were really wearing an invisible corporate leash. Scientists and pseudo-scientists hired by big tobacco were ushered into the public eye to sow doubt about the science, and plead for more studies, or more time to study the data before concluding that cigarettes were harmful. (There's a montage of tobacco industry shills repeating variations on "Cigarettes may not be hazardous.")

The movie compares this to three-card Monte dealers paying a "stranger" to stand near them, watch them with delight, then participate and "win" the game, so that bystanders would think it wasn't rigged, join in, and lose their money. The cigarette doubt-sowers succeeded with this approach a generation. Warning labels didn't appear on cigarette packages until 1966, and advertising was regulated slowly over the next few decades. The movie shows how the same strategy was applied by companies that made the chemicals used to treat furniture.

Until the 1970s, a large number of people died from fires caused by smokers falling asleep without extinguishing their cigarettes. Because it would have cost money to treat cigarettes with flame-extinguishing chemicals, the tobacco industry planted a "legislative representative" from their own ranks within the National Association of Fire Marshals, which then argued that the real problem was furniture catching fire. This led to furniture being treated with "flame retardant" chemicals (sometimes as much as two pounds' worth in an average sofa) that did not actually retard flame, and that were subsequently linked to ailments and conditions, including low fertility and cancer. Chemical manufacturers sowed doubt about health problems caused by their products through a front group, Citizens for Fire Safety, which was shuttered in 2012 after a Chicago Tribune investigation discovered that they were funded by Albermarle Corporation, ICL Industrial Products and Chemtura, the three largest makers of flame retardant chemicals.

The movie is filled with similar examples of corporate treachery, leading up to the present day, which finds oil and gas companies sowing doubt about climate change through front groups, hired gun scientists and other shills. Oreskes, co-author of the film's source book, appears on camera to tell how she fact-checked the widely repeated assertion that there was no consensus on climate change, and discovered that of 989 scientists who'd seriously studied the topic, not one thought there was serious doubt that human industry and pollution contributed to a rise in average global temperatures.

This is a huge, unwieldy topic. The filmmakers do an admirable job of condensing their information and making it comprehensible. They don't really succeed in unifying it, though, or in making the whole enterprise seem like more than a collection of talking points for people who are mad about climate change deniers, people paid to sow doubt about the damage caused by smoking, and their ilk.

But that doesn't seem to be the point of the movie. The film is mainly useful as one-stop shopping for the opposition. Scored with mischievous caper music, it keeps revisiting an ominous (and purely metaphorical) archive filled with damning documents (picture the warehouses at the ends of "Citizen Kane" or "Raiders of the Lost Ark"). It uses computer graphics and digital compositing to show incriminating papers gliding out of folders and floating through the air as if manipulated by accusing spirits, and superimposes the filing cabinets with news footage of industry bigwigs and hired "experts" going on talk shows and appearing before government committees to deliver an approved script.

"Merchants of Doubt" opens with scenes of illusionist Jaimy Ian Swiss performing card tricks for an audience at The Magic Castle in Los Angeles. He tells the viewer that while he's a proud expert at fooling audiences, he makes an "honest living" because the people who watch him expect to be tricked and know it's all entertainment—and that the same is not true of shills for corporations aiming to deceive the public, thwart government regulators, and protect shareholders. "It offends me when someone takes the skills of my honest living, if you will, and uses it to twist and distort and manipulate people and their sense of reality," he says. The movie returns again and again to images of illusionists, card sharps and street hustlers, to show how industries' self-protective strategies are variations on con games. The only real challenge, explains magician Swiss, is "how to mask the shill." 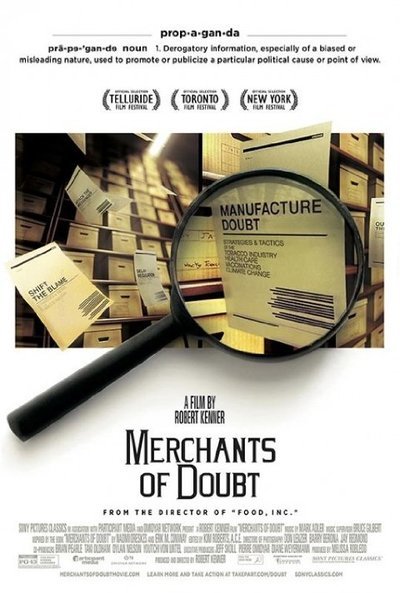