Usually, when a studio declines to screen a movie for reviewers, the reflexive assumption is that the picture is a dog. This largely turns out to be true, but not always.

As for “Mechanic: Resurrection,” the disinclination of Lionsgate to present it to viewers was a little puzzling in a different respect. Sure, the 2011 film “The Mechanic,” a Jason Statham/Ben Foster starring remake of the 1972 Charles Bronson/Jan-Michael Vincent master hitman thriller, only got a 53% rating on Rotten Tomatoes, but I thought it was pretty okay, and that’s all that counts. Given that the sequel pairs off Statham’s implacable best-of-the-best anonymous assassin with charming genre movie mascot Jessica Alba, and has Tommy Lee Jones third-billed or so, with Hong Kong eminence Michelle Yeoh rounding out the supporting cast, well, how bad could it be?

Not good, is the answer, learned at an early Thursday evening screening. Despite some of the most picturesque locations money can buy, and some not unimpressive looking movable props (yachts with helipads and such) and so on, “Mechanic: Resurrection” suffers from a storyline and script that strains credulity and insults intelligence even by the low bar set by the majority of contemporary action movies.

The picture opens with Statham’s Arthur Bishop comfortably ensconced, à la Travis McGee, on a houseboat in Rio. The steadiness of the houseboat is such that Bishop, now known as Santos, can rock out with a vinyl turntable. But not for long. Lunching at his favorite cliffside outdoor restaurant, he’s approached by a femme fatale who Knows Who He Really Is, and who tells him her “Principal” wants him to kill three targets. Santos/Bishop’s violent refusal to play ball is met with an attack by a small military battalion’s worth of men. Not only does this action sequence fail to build a head of steam, but the lack of logic is a little startling. I need you to kill these men for me, because only you can do it, and if you refuse, I will kill you myself. Spot the flaw in this thinking.

Bishop of course escapes, and regroups at a seaside village in Thailand, watched over by old pal Mei, played by Yeoh. Soon enough a honey trap with Alba as the bait makes itself known. But Alba’s not a villainess. Her character, Gina, is being extorted in a sense by supervillain Crain, a bland Sam Hazeldine. If Gina doesn’t play ball, Crain’s going to torch the Cambodian orphanage at which Gina is a beloved fixture. Yes, you read that right.

Tending to Gina’s wounds in one scene, Mei says to her patient, “My father was a doctor of Eastern medicine. He was a healer.” Well, yes, I would hope so. Later in the movie, Gina says to Bishop, “Those kids are everything to me. If they get trafficked or killed I just couldn’t take it.” Bishop responds, “I was an orphan too.” Wow. This isn’t just a character note: it’s a plot point. Crain was a childhood friend of Bishop back at the orphanage. This wasn’t particularly convincing in the last James Bond film and it works even less here, although if you choose to buy it you may wonder what it is with British orphanages that make them turn out such efficient killers. There’s also the matter of the phrasing of the dialogue itself. “If they get trafficked or killed” doesn’t exactly roll off the tongue. Alba is an appealing screen presence (and director Daniel Gansel takes some advantage of this with a few beach-set shots of the sort that they used to call “cheesecake”). She is not the most virtuoso actor, but not even Meryl Streep could make such dialogue sing.

It’s kind of perplexing: clearly not too much expense was spared in the beautiful locations and blow-stuff-up effects tech. Writers in every industry come cheaper and cheaper these days; surely the producers could have invested some of their financing in a script with more inventiveness and engagement power than the one they had on set. Of course, this still would have left the uninspired direction of Gansel. Might he have delivered something more enjoyable with better material? We’ll never know. As for Tommy Lee Jones, his role as a roguish arms dealer is not much more than a cameo, for which he chooses to repeat many of the performing riffs he worked to good effect way way back in 1992’s “Under Siege,” the elemental but enjoyable action film that kind of made Jones into a big star. His work here is one of two pieces of wit the movie has to offer; the other is courtesy of production designers Sebastian T. Krawinkel and Antonello Rubino, who place a replica of the sculpture in the Mosfilm logo title shot in the repository of Soviet kitsch that serves as Jones’ character’s panic room. 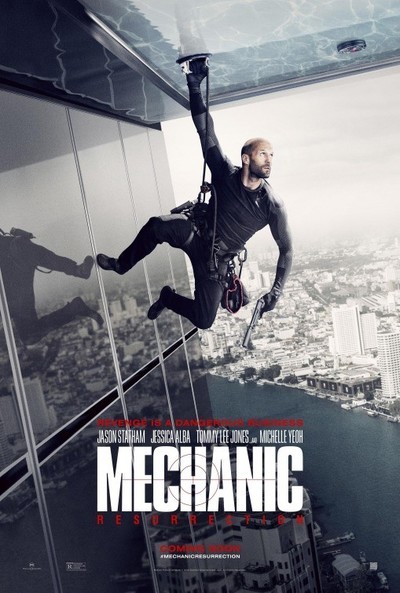 Rated R for violence throughout and language.

Writer (based upon the characters created by)