“At least I’m consistent!”, tennis champion John McEnroe once claimed during a quarrel with his son Kevin, to which the boy replied, “Consistently an asshole.” The pain that registered on his father’s face as these words left Kevin’s mouth continues to haunt him decades later, yet there’s no denying that his angry remark carries the unmistakable ring of truth. After all, McEnroe’s name has arguably become more synonymous with hotheads than any form of greatness. Just the other day, I was watching a rerun of “The Great British Baking Show” in which host Noel Fielding referred to a contestant routinely prone to outbursts as “the John McEnroe of baking.” Indeed, McEnroe’s profane bullying of umpires and penchant for smashing his racket to the ground earned him the nickname of “superbrat” in the U.K. His on camera tantrums don’t appear to be the behavior of a mature adult but that of an insufferable crybaby. No wonder his children grew up deeply confused by the childish example set by their father. If the tennis court is indeed a theatre stage, as dubbed by Billie Jean King, then McEnroe put on a show worthy of Jerry Springer—in between playing some of the greatest matches in sports history.

Barney Douglas’ new Showtime documentary, simply titled “McEnroe,” finds its titular 63-year-old subject in a pleasingly reflective mode, suggesting that he has grown more palatable with age. Lukas Tucknott’s strikingly artful cinematography deliberately imitates the noir aesthetic of Michael Mann’s masterful 1981 debut feature, “Thief,” in which its protagonist was doomed to a life he strove to fight against, one of perpetual alienation. Tennis is by its very nature a lonesome sport, requiring its players to rely solely on their own skillset while blotting out the pressure that aims to distract them at every turn. Throughout the picture, we see McEnroe wandering in the middle of the night down the streets of Douglastown, New York, rendered near-vacant by the Covid-19 pandemic. The sting of regret is noted in his voice as he freely admits that a lack of empathy has been his greatest character flaw. Sometimes this stylistic approach verges on silliness, such as when McEnroe’s fellow top-ranked player King is made to look as if she’s talking to herself in an empty train station. Yet it sure beats the monotony of the standard talking head approach, and some of the film’s most haunting images utilize subtle visual trickery to make McEnroe look as if he is peering at his own doppelgänger with newfound clarity.

There’s also an inspired use of effects that evokes another cinematic classic from the four-year period in which McEnroe was the world’s reigning tennis champion, 1982’s “TRON.” Douglas illustrates how McEnroe perceives the court as a giant invisible grid in which he can plan out each of his moves with mathematical, split-second precision. The film does a fine job of detailing how McEnroe was a formidable force to be reckoned with from the moment he made his debut at the French Open and Wimbledon in 1977 at the mere age of 18. Whenever McEnroe stops complaining and simply plays, the archival footage of him darting back and forth on the court, scoring hits that would be out of reach for most mortals, is utterly thrilling. Though the film initially promises to follow its subject into a dark night of the soul wherein he wrestles with demons, “McEnroe” is every bit as much a celebration of his legacy as a gifted bad boy. As his celebrity emerges as the equal of the rock ’n’ roll stars he routinely parties with, Steve Williams’ editing occasionally has the slickness of a music video, showing how his obnoxious persona was embraced in some quarters as a rebellion against stuffy British propriety. He craved to be the target of Beatlemania-style attention, only to be hounded by paparazzi that plagued his first marriage to Tatum O’Neal, who is conspicuously absent among the film’s interview subjects.

To be fair, many of McEnroe’s idols and eventual competitors in the sport such as Jimmy Connors and Vitas Gerulaitis could hardly be considered refined in manner themselves—with the major exception of Sweden’s Björn Borg. The fascinating rivalry between these two men has been previously chronicled onscreen in the 2011 HBO documentary “McEnroe/Borg: Fire & Ice” and the 2017 narrative feature, “Borg vs. McEnroe,” both of which remain unseen by me, yet the new interviews Douglas conducts with Borg are so good, one almost wishes that this film was equally about him as well. Borg recognized in McEnroe a kindred, fiercely driven spirit, yet his coiled composure served as the perfect counterpoint to his opponent’s bombastic nature, leading to a protracted tie-breaking match more nail-biting than any duel between superheroes. By demonstrating how one could withstand immense stress without flying off the handle, Borg provided McEnroe with an invaluable lesson, which made his sudden decision to retire at age 26 all the more devastating. Losing his greatest rival made it impossible for McEnroe to fully enjoy his greatest years of success, which he spent hoping that Borg would return, even if it meant that he’d get bumped down to the number two slot in the rankings.

As dawn approaches in Douglas’ film, we see how—after a series of sobering losses, both personally and professionally—McEnroe appears to have found his ideal mate in singer Patty Smyth. In a way, she seems to be the partner he has been searching for all his life. Though much of McEnroe’s psyche remains a mystery, the documentary is persuasive in noting how at least part of the man’s ever-brewing frustration stems from the unresolved relationship he had with his father, John McEnroe Sr. (who vocally detested being called “senior”). He served as his son’s devoted legal advisor for years, but was unable to show him the level of affection normally bestowed by a loving parent. The closing moments of “McEnroe” are resoundingly hopeful, as we see the once frightening record-breaker now determined to give his kids the very thing he was deprived of in his own youth, while perhaps finally allowing himself to appreciate his own achievements as well. Still, McEnroe insists that he is never at total peace, and his smile at the end of the film indicates that he prefers it that way. 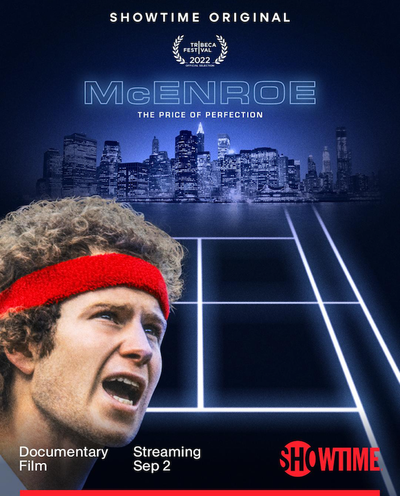 John McEnroe as Self

Patty Smyth as Self

Björn Borg as Self

Billie Jean King as Self

Keith Richards as Self

Peter Fleming as Self