Bigger isn’t necessarily better when it comes to sequels.

“Maze Runner: The Scorch Trials” is larger than its predecessor, last year’s “The Maze Runner,” in every way: in its cast, scope, set pieces and (unfortunately) length. But “more” also means more convoluted. The mythology in these dystopian young adult novels-turned-films can be dense at times, but “Maze Runner: The Scorch Trials” crams in more lore, supporting characters, backstories and motivations to the extent that it becomes difficult to get a grasp on anything.

Returning director Wes Ball covers a lot more ground this time, literally and figuratively, in adapting the second novel in author James Dashner’s “Maze Runner” series. But while his characters are constantly on the run, it feels like they’re never really going anywhere. The script from T.S. Nowlin (who co-wrote the first film in the franchise) has an episodic structure that ultimately makes it feel repetitive. The characters are in one post-apocalyptic bunker, then they’re in another. They’re under the protection of one untrustworthy adult, then another. They’re skulking about an abandoned mall by flashlight, then slinking through a sewer system by flashlight. They walk across the desert by day, trying to survive the heat, then run across it by night, trying to escape lightning strikes.

These adventures might be more intriguing if the characters involved in them had even a smidgen of depth. The hero who emerged at the center of part one, Thomas (Dylan O’Brien), remains the quietly courageous leader in part two. He’s the requisite rebel in this YA series, cut from the same cloth as Katniss in “The Hunger Games” and Tris in “Divergent”; he’s the one who dares to shake up the status quo, challenge a cold, monolithic government known by the not-so-subtle acronym WCKD (i.e. the grown-ups) and start a revolution. He doesn’t develop much of a personality along the way, though, even though we receive clues from his past that he has always been The Chosen One.

His buddies from the Glade don’t fare much better in the characterization department. Newt (Thomas Brodie-Sangster) remains wisecracking and irreverent. Frypan (Dexter Darden) is girl-crazy. Teresa (Kaya Scodelario), their only female companion, is mysterious and morose. Along with a few others, they all find themselves stuck inside a different kind of compound at the start of the film, which picks up right where “The Maze Runner” left off. They get food and shelter and clean clothes and actual beds at this new place, which sounds like a good deal. But then they—and kids who managed to escape other mazes—gather each night at dinner to find out which of them will be whisked away to a supposedly exciting new home.

Clearly, nothing good is in store for any of these people. That’s obvious simply from the demeanor of the guy who runs the joint, the turtleneck-clad, vaguely accented Janson (Aidan Gillen). When Thomas and hoodie-wearing loner Aris (Jacob Lofland) do a little middle-of the-night exploring, they stumble upon the nefarious medical experiments scientists are performing on these kids, all in the name of finding a cure for the plague that has ravaged the nation. At least that’s how Patricia Clarkson, as the crisp and efficient doctor Ava Paige, justifies such creepily devious actions. (As in part one, the great Clarkson is sadly underused here; so are fellow supporting players Barry Pepper and Lili Taylor in barely-there supporting roles.)

It’s this discovery that sets Thomas and his friends on their journey to find help and safety, which does feature some tense moments within individual action sequences and some striking imagery. One shot in particular stands out of the kids walking single-file along the top of a sand dune, silhouetted by the sun, then stopping simultaneously and spaced apart perfectly once they hear a gunshot shatter the desert silence.

But other elements feel too obviously derivative of better films. As the teens traipse across the decimated remnants of a once-thriving urban center known as the Scorch, each hill of rubble they crest calls to mind the bombed-out remains of the various districts in “The Hunger Games” series. And a sequence in which they run for their lives from ravenous zombies in an abandoned shopping mall is straight out of “Dawn of the Dead.” (These hideous creatures, known as Cranks, have been infected by the plague; it’s turned them into fast-moving, Danny Boyle-style zombies rather than slow-shuffling George Romero-style zombies, for those of you who like to keep track of these things.)

A far more inspired scene finds Thomas & Co. sneaking into the hidden headquarters of underground leader/mercenary Jorge (Giancarlo Esposito) and his feisty daughter figure, Brenda (Rosa Salazar). This is by far the most gripping segment of the film, not only because Jorge’s lair is so cool and intricate and Esposito brings such élan to this complicated bad-guy figure, but also because it sets up the only flat-out fun moment you’ll see. I won’t spoil it for you, but I will say that it features inspired use of the Patsy Cline classic “Walkin’ After Midnight.”

The rest of the movie, choked in sand and dust and surrounded by concrete and steel, could have used more bursts of that kind of crazy energy. The self-seriousness of it all becomes suffocating—and there’s only more of it to come. After all, there’s still a third and final book out there, waiting to be made into a movie (if not two). 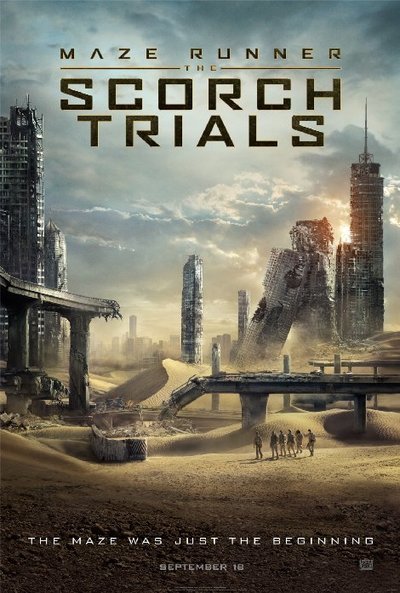 Rated PG-13 extended sequences of violence and action, some thematic elements, substance use and language