Quebecois filmmaker Xavier Dolan burst onto the scene with 2009's "I Killed My Mother," which he wrote, directed, and starred in. He was 19 years old. The film generated extremely diverse and complicated responses. Some thrilled to his exuberant unfettered youthfulness, others were put off by his visuals, deemed self-conscious and unconnected to the narrative. There was something exhibitionistic about Dolan (not necessarily a negative), as well as something eerily self-aware. He is both distant and present as an actor, and this perhaps came from his youth and beauty, as well as his awareness of how his beauty might affect others.

In "Matthias & Maxime," his eighth feature, Dolan, for the first time, looks into the past, yearning for the impulsiveness and explosive emotions of youth. At 31, he has some distance now. The distance causes him some problems in "Matthias & Maxime": he falls back on cliches, on situations we've seen a hundred times before. Much of "Matthias & Maxime" is pedestrian to the extreme, and there is a general lack of character development across the board, but the way Dolan chooses to frame things, the visual choices he makes, the way he revels unashamed in the big-ness of the emotions, makes it an entertaining ride.

"Matthias & Maxime" starts with a rowdy group of friends gathering at a lake house to celebrate one of their birthdays. The guys are competitive, it's all rough-housing and trash-talking, playing board games and word games and occasionally almost coming to blows. When these guys play a game, they mean business. Thrown into this mix is a young female filmmaker, who peppers her sentences with English phrases (annoying this word-conscious bunch). Everyone resents her presence. (The women don't fare very well in Dolan's films.) She ropes Matthias (Gabriel D’Almeida Freitas) and Maxime (Dolan) into acting in her unfinished project. She wants them to play a scene where they are supposed to kiss. Maxime's fine with it. Matthias is more uptight. Complicating this is the well-known fact that the two kissed once in high school. Ancient history, right? Not at all. Their onscreen kiss causes a typhoon of long-repressed emotions.

Matthias is an up-and-coming lawyer, on the verge of settling down with his longtime girlfriend. Maxime, on the other hand, is planning to move to Australia, mainly to get away from being the primary caretaker of his chain-smoking abusive mother (Dolan regular Anne Dorval). Maxime has a birthmark spilling across the side of his face like a splash of red ink. The birthmark is probably meant to be symbolic of something psychological—"Matthias & Maxime" is filled with self-conscious symbols—although what it could be I'm not sure. Perhaps it's supposed to be his inner pain seeping through his skin, or some such literary conceit. Matthias is so freaked out by the kiss that before you know it he is going for long emotionally-charged swims (accompanied by slashing anxious violins), or running through a snowfall, or retreating from his confused girlfriend. Maxime is gay, and not surprised by any of this, but he is surprised and hurt by Matthias' withdrawal from the friendship.

What is fun about all of this melodrama is how it is presented without a whiff of an ironic wink. The emotions may be operatic, but they are sincere. The torment is elongated, and yet it comes from a real place. It's all unrequited yearnings, unexpressed desire, bodies quivering to touch each other, and yet not able to. This is sexy stuff. "Matthias & Maxime" feels a little bit like fanfic, where fans, desperate to make the subtext of their favorite work go text, write libraries of slashfic, imagining their faves finally hooking up. If you read slashfic, you'll recognize all the tropes, not to mention the overuse of the pathetic fallacy. What good is an operatic emotion if rain doesn't pour from the sky? Why yearn for your soulmate without autumn leaves swirling around you?

The women in "Matthias & Maxime" are mostly stock characters and negative stereotypes. The older women are shrieking cackling witches, and the younger women are either gratingly annoying or wet-blankets on the boys' fun. "Matthias & Maxime" is unabashedly about "the boys," and how they deal (or don't deal) with the stuff swirling around in their relationships. Dolan approaches much of this voyeuristically: the camera peeks at the characters, or looks at them from a distance, through door and window frames. In one scene, the camera moves slowly away from the group cavorting in the rain before landing on a lit window, through which Matthias and Maxime can be clearly seen, in a tormented and passionate clutch. The fear of being looked at, exposed, seen is as powerful as the acknowledgment of how sexy it is to be looked at, exposed, seen.

The performances are fine, although nobody really emerges as a three-dimensional character. Harris Dickinson, excellent in "Beach Rats" and "Postcards from London," appears as a client Matthias has been tasked to wine and dine. Dickinson's character proclaims his heterosexuality loudly, boorishly, and yet his energy towards Matthias is undeniably flirtatious, causing Matthias, again, to tailspin. These scenes are very well-observed.

Dolan brings an interesting mix to the table as an actor. He is cocky, aware of his "affect," he is both there and not quite there. He enjoys being on display, but he also withdraws, pulling people towards him. This, for me, is the most intriguing aspect of his work. "Matthias & Maxime" has its silliness—all that torment, all those swirling leaves—but it also taps into Dolan's sensitivity to what turns him on, to what he finds erotic—all that peeking at each other, all those electric pauses and charged distances. In today's sometimes sexless environment, it's a breath of fresh air. 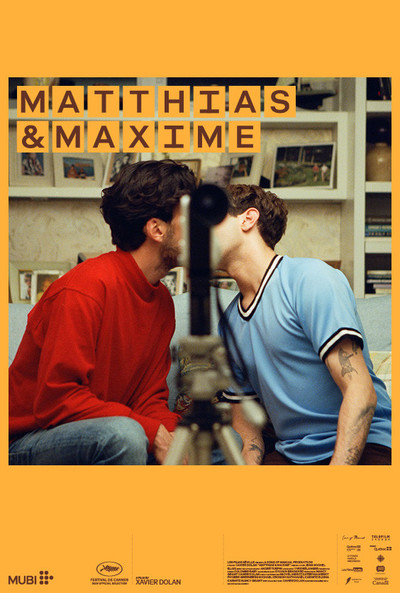