"Beach Rats," writer/director Eliza Hittman's second feature, has a plot, sort of, but the plot isn't really "the thing" here. The film is more of a tone-poem, a shifting collage of mood and atmosphere, back-lit by the seedy-glamorous colored lights of Coney Island, the neighborhood in which the film takes place. Shot on 16mm by French cinematographer Hélène Louvart, the film immerses you in an almost totally sensorial experience: smells, sounds, colors, the look of skin in sunlight and darkness, etc. Hittman's devotion to the male bodies onscreen is obsessive. Most good filmmakers, and most good artists, are obsessives. It goes with the territory. Hittman's obsession creates a potent blend of eroticism, pent-up feelings and good old-fashioned appreciation of beauty.

Frankie (Harris Dickinson) is a 19-year-old kid, living at home with his mother (Kate Hodge), little sister, and father dying in a hospital bed in the cramped living room. Frankie spends his days horsing around with his posse of friends, guys he's probably grown up with. Frankie deals drugs, his only source of income. He and his friends spend their days at the beach, playing handball, going swimming, hanging out at a nearby Vape bar, blowing smoke rings. Nobody has anywhere to go. Late at night, alone in his basement room, Frankie signs on to webcams to sex-chat with local men, most of them older. Sometimes they meet up in person, for quick sex in the shadows by the beach. You know without even having to be told that Frankie has not revealed—and could never reveal—to his tough-guy friends what he is doing, who he is. The word "gay" barely exists for Frankie as a possible identity. (Dickinson hails from England, and you believe completely that he is a big jocky Brooklyn guy.)

One night, a sassy girl named Simone (Madeline Weinstein) flirts with Frankie in front of his friends. He's pulled, almost by a force outside his control, into dating her. She's sweet, but tough, too. He likes her. Frankie is passive about all of this to the point where you don't know if HE knows that he has a choice. But still, at night, Frankie has anonymous encounters with grizzly old guys, most of whom act like they've hit the jackpot when they get their first look at his physique and his beautiful face.

What happens in "Beach Rats" happens between the words. There are some familiar trappings of this kind of story, a hookup gone wrong, worries about his homophobic friends, fights with Mom, the fear that something might really go wrong if his secret is revealed ... But "Beach Rats" works best when it's elusive, when it succumbs to its interest in bodies; filmed in fragments, forearms, cheekbones, stomachs, sculpted with shadows. The film is frankly voyeuristic, sometimes objectifying, but it's an appreciative objectification, reminiscent of Bruce Weber's photographs. The male bodies dominate. We are in Frankie's claustrophobic world of longing.

Some may find the elusiveness of "Beach Rats" a cop-out. I didn't. Yes, I wanted to tell Frankie to go find a local LGBT center and get a new tribe of more accepting friends. But "Beach Rats" is about longing, more than anything else, the experience of wordless inchoate longing. Longing is agony, but longing is pleasurable too. Hittman gets that. 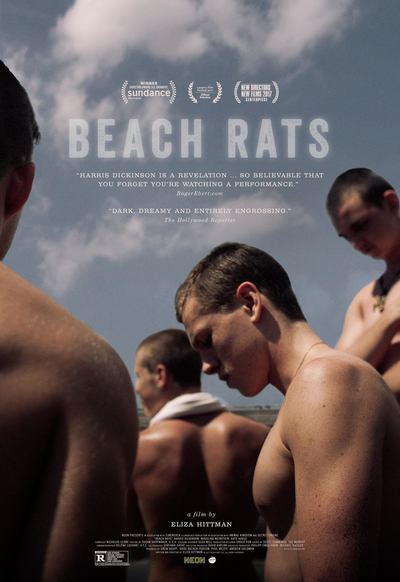