Early on in “Mary Shelley,” a muddled biopic about the early 19th-century British teen-ager who would conceive “Frankenstein,” her soon-to-be-lover and future husband, poet Percy Bysshe Shelley, flirtatiously inquires if she is a writer. She coyly answers, ”Not really. Nothing substantial.” He then asks her to define substantial. Her breathless reply: “Anything that curdles the blood and quickens the beatings of the heart.”

There is little chance of either biological reaction being triggered during the course of this misguided effort to once more stage the fateful stormy summer night at Lord Byron’s Lake Geneva villa in 1816 that would give birth to a tale that continues to spark our imaginations today. For that sort of response, you would have to turn to Ken Russell’s “Gothic” from 1986. A diabolical master of pungently alluring visual cinema, the twisted British auteur served up a ghoulish goulash of gushing blood and heaving bosoms that delivered the eerie and the erotic in unrestrained doses. But director Haifaa Al-Mansour and screenwriter Emma Jensen seem more intent in turning their blossoming literary heroine into an inspiration for young girls as she challenged the social norms of male dominance. That’s fine. But what results is a tepid soap-operatic battle of the sexes that drains passion rather than enflames it.

For her first feature, 2013’s much-admired “Wadjda,” Al-Mansour picked a subject that hit close to home for her: a Saudi Arabian girl enters a school competition so she can use the prize money to buy a bicycle, a mode of transport deemed improper for females. Al-Mansour would go on to make history as the first woman to direct a full-length Saudi film, one that became her country’s only entry so far in the foreign-language Oscar sweepstakes. That it didn’t make the cut as a nominee is an afterthought, since it opened doors on the world stage for the woman behind the camera.

But as all too often happens after a filmmaker’s debut makes a big splash, finding a worthy sophomore effort can be a daunting task. So let’s cut Al-Mansour a little slack for misfiring with “Mary Shelley”—but not too much. It’s all well and good to stand up for the creator of “Frankenstein,” who initially wasn’t even given authorial credit for what is considered the prototype for all sci-fi novels to come. It was assumed by most that her better-known spouse wrote the tale since he penned a preface for it—until her influential father, writer and bookseller William Godwin, reprinted the book with her name on the cover years later. But this portrait of an unconventional historical figure is burdened rather than liberated by its too conventional framework.

Also problematic are the actors playing both Mary and Percy. Usually, the comely presence of Elle Fanning would be a plus but, for some reason, I found it hard to buy her as this artist-on-the-cusp who grew up under tragic circumstances. Her mother, Mary Wollstonecraft, was ahead of her time as the firebrand writer of A Vindication for the Rights of Woman which argued that women were not inferior to males. This supporter of free love and equal rights would die mere days after giving birth to her namesake daughter, one of several untimely demises that would plague the younger Mary, including two of her own children.

Mary, as well as the story itself, should be haunted by such losses, especially given that she liked nothing more than hanging out at her mother’s gravesite while scribbling in her notebooks. Instead, the movie, as picturesque as it is, only skims the surface of such complex emotions. Both Fanning and Douglas Booth (“Loving Vincent”) as Percy are exceedingly pretty to behold and wear their period garb well. But they never feel fully settled into their roles or engaged in their scandalous liaison (he was married with child— actually, two—when they met). Not helping matters is that far too much of Booth’s dialogue consists of lines from Percy’s poems, as if he is riffing on his own greatest hits.

Instead, the most fascinating couple in the movie turns out to be Bel Powley (“The Diary of a Teenage Girl”) as Claire Clairmont, Mary’s younger half-sister. The high-spirited, natural-born rebel falls for Tom Sturridge’s self-adoring Byron, a study in rakish foppery, excessive eyeliner, swishy tapestry robes and  vulpine-like leering as he lasciviously flicks his tongue at a willing Claire, who is pregnant with his baby. The twist and turns in their toxic tango are far more intriguing than Percy and Mary’s travails.

Another sin: Why hire such TV favorites as Joanne Froggatt (Anna Bates on “Downton Abbey’s”) as Mary’s disagreeable stepmother and Maisie Williams (Arya Stark on “Game of Thrones") as her loyal Scottish chum and never give them anything memorable to do?

Don’t expect anyone to shout, “It’s alive!” as they depart the theater. It’s a shame that this rather dreary and excessively talky account underplays its primary draw: Finding a fresh way to show how the original goth girl modernized the myth of a mad scientist who dares to play God. Not even a jolt of electricity could spark this overlong timeline of events in its subject’s life that are ticked off like items on a to-do list. Mary Shelley and her monster fable deserve better than a treatment that is basically DOA. 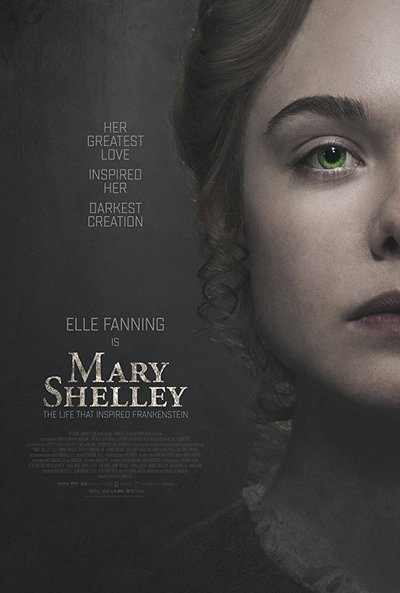