I wish there were a word for "experimental fluff," because that's what "Magic Mike XXL" is. It's a new kind of critic-proof movie. You could rightly describe it as "two hours of Channing Tatum and other hunky guys bonding, flirting with women, and doing bump-and-grind dance routines" and not be wrong, and yet it's made with such aesthetic playfulness that I expect it to generate graduate theses with titles like, "Breakaway Pantomimes: 'Magic Mike' and Commodified Desire."

The film is directed by Gregory Jacobs, a longtime assistant director to "Magic Mike" director Steven Soderbergh, and co-produced by Soderbergh, who also shot and edited the movie under pseudonyms. It's quite deliberately about as close to a non-movie as a movie can be while still calling itself a movie. At times it feels like the beefiest and least douchebro-pandering episode of "Entourage" ever. Tatum's Mike and the remaining Kings of Tampa—Ken (Matt Bomer), Big Dick Richie (Joe Manganiello), Tarzan (Kevin Nash), Tito (Adam Rodriguez)—pile into a yogurt truck and drive to Myrtle Beach, South Carolina, to compete at a strippers' convention. "We got a tsunami of dollar bills to get to, daddy," exclaims Mike, in a tone that makes it sound as though they're about to storm the beach at Normandy.

That's all there is in the way of story. And this is by design. "Magic Mike XXL" is what your English teacher would call a picaresque narrative, or perhaps a comic epic. Mike is the captain of the S.S. Bananahammock, trying to lead his crew of gyrators and lady-pleasurers toward one last big, long, wide hurrah, before they go their separate ways and join the "respectable" world. They're rock-hard, oiled-up sailors, the truck is their vessel, the American South is their river or perhaps their wine-dark sea. The film could have been titled "Homeboy's Odyssey," or "Beestunglips Now." All that's missing is narration by Mike, periodically interrupted by drags on a joint and moments where he tries to remember what point he was trying to make.

En route to Myrtle Beach, Mike and company go places and meet people and have (often comically) erotic adventures. These set pieces feel geographically self-contained, as if every nightclub or private home were sequestered on its own island. The boys visit a gay strip club and somewhat lackadaisically compete onstage, then unwind at an all-night beach party. They stop by a next-generation strip club run by Mike's old flame Rome (Jada Pinkett Smith), who styles herself as a goddess-queen of desire, overseeing a mostly black male crew of strippers catering to a predominantly black female clientele. At one point the Kings drop in at a woodland house that looks a bit like a former plantation and interrupt a party of middle-aged ladies, hosted by Andie MacDowell (of Soderbergh's "sex, lies, and videotape"); when she mentions that she's only ever had sex with one man in her life, her husband, you just know that one of Mike's guys will help her out with that. (The guest is supposed to give the host a gift, y'all!)

We learn via expository dialogue that Mike's old boss and mentor Dallas (Matthew McConaughey) left the group (which I guess is code for, "McConaughey wanted too much money"), and that Mike retired from stripping three years ago and poured his energy into his furniture business and proposed to what's-her-name in the first film and was rejected. There's a new what's-her-name in "XXL"—actually a tattooed, glum, sarcastic photographer named Zoe (Amber Heard), who keeps reappearing at various stages of the strippers' journey; but she has as little chemistry with Mike here as Cody Horn's Brooke did in the first picture. When a series about a handsome and charming male stripper serves up two dud love stories in a row, you have to assume it's intentional—that the films are genuflecting to the idea of including a "love interest," but not trying too hard to make a convincing one, because it might interfere in with the films' true, great, ongoing romance, between the audience's eyeballs and Channing Tatum's body.

To that end: where the first "Mike" confined nearly all its numbers to strip clubs, this one brings the routines into the wider world, creating something poised between a low-budget, semi-realistic road picture (full of quiet, sometimes flabby scenes of dudes hanging out and busting each other's chops) and one of those old-fashioned musicals where singing and dancing could just suddenly happen, at any time, for any reason. There's are solos set in Mike's workshop and at a gas station convenience store, and a couple numbers that are more song than dance (courtesy of Bomer and new cast member Donald Glover, aka rapper Childish Gambino as well as Troy on "Community"). The final act of "XXL", set at the stripper convention, almost departs from "realism" entirely. It amounts to a self-contained concert film that gives all of the guys their own solo numbers. Soderbergh, shooting as "Peter Andrews," lets the camera glide up and down on cranes as if we were watching Gene Kelly and Cyd Charisse rather than jockstrapped hunks grinding and diving and flipping and dry-humping—and not only is that OK, it's sort of awesome. Smith presides over this section of the film as if auditioning to play the Emcee in the next Broadway production of "Cabaret." She even has a Fosse fedora that complements her Tony Manero suit.

Does the movie work? Intermittently, sometimes brilliantly. Reid Carolin's script features plenty of talk about the importance of appreciating and creating beauty for its own sake, as well as the invigorating properties of orgasms and sexual spectatorship and sensual indulgence, and the necessity of men listening to women and worshiping them like royalty. There are points when Mike and the gang are characterized as sexual deliverers, angels of mercy, or some such, and the movie is really not kidding about any of it, even when (especially when) Mike is talking about how much he loves cookies. "Any god worth believing in sends you dudes in thongs when in need," Zoe tells Mike sarcastically, in a scene where the boys really did show up out of nowhere and make women's lives better just by being so damned sexayyyyy.

The best parts of "XXL"—the "dance" numbers that go on and on—have the funny-intoxicating feel of a reverie. The second-best parts parts play—as weird as this sounds—like a minor Robert Altman film that's more atmospheric than exciting and that takes great care to get accents and regional details right; something like "Cookie's Fortune" or "The Company" or "Dr. T. and the Women," maybe. The leading actresses—Smith, MacDowell, and Elizabeth Banks as a stripper convention administrator—have a spark here that they're rarely allowed to show in other roles, mainly because the filmmakers have encouraged them to be joyous and lustful. (MacDowell's "Day-YUMMMMM!" will be my ringtone soon.)

It's enough to make you wish the filmmakers had thought harder about what they were saying and doing, or trying to say and do, and made sure every part of the film felt frothy but controlled rather than aimless and half-assed, which unfortunately is a problem in a lot of "XXL." There are some germs of themes bopping around in the margins, mostly having to do with gender politics and race-mixing in the new South (apparently Rome's nickname for Mike was White Chocolate) and the mainstream heterosexual appropriation of images and attitudes that were once deemed fringe. I miss McConaughey's mad-eyed commitment, I wish the gay strip club scene didn't feel perfunctory, and I wish more guys in the main cast besides Tatum were great, as opposed to adequate, dancers. ("So You Think You Can Dance" star Twitch has a nearly wordless supporting role, but gets a showpiece number with Tatum at the end.)

But having attended a screening where hundreds of people applauded at their first glimpse of Tatum's back and shoulders, I know full well that almost no one who pays to see "Magic Mike XXL" will miss that other stuff. This is a two-and-a-half star picture, bumped up to three because it's so structurally and tonally unusual, and so likable, but if you're mainly looking to watch nearly naked guys dance, it's four stars, maybe five, or ten, depending. Box offices should brace for a tsunami of dollar bills. 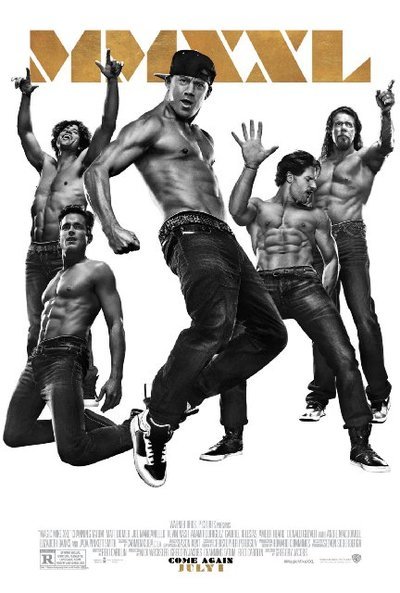