Preteen Toni (Royalty Hightower) stares into the camera throughout "The Fits," an effective and creepy-surreal film directed by first-timer Anna Rose Holmer. Her gaze is unblinking at times, whether she's doing sit-ups, pull-ups, trying on earrings, or staring at the older girls in the locker room of the Cincinnati community center where she spends the majority of her time. Toni hangs out mainly in the boxing gym with her older brother, where she trains alongside of him. She "helps out" at the gym, sweeping floors, doing laundry. She's quiet and watchful, fiercely devoted to her work-outs, serious beyond her years. She's a child on the cusp of being an adolescent. How she interprets what she sees around her is one of the central mysteries of this extremely mysterious film. "The Fits" weaves a spell with a mood of unnameable uneasiness. Being a girl seems to be the central problem, or maybe being a girl is not a problem at all. "The Fits" is the kind of film that asks more questions than it answers. The questions have echoing resonance.

Before otherworldly elements start to emerge, "The Fits" is reminiscent of much of the work of Céline Sciamma, whose films ("Water Lilies," "Tomboy," "Girlhood") explore various aspects of being a girl. In Sciamma's 2007 film "Water Lilies," a young girl stares longingly at the water-ballet team and wants to be close to the beauty of those older girls, their grace and confidence. In the landscape of childhood and adolescence, peers are all. Peers set the rules of engagement, peers let you know whether you're "in" or "out." Adult figures barely register, and that's the case in "The Fits," which takes place entirely in the community center where kids gather for after-school activities. Toni is drawn to the cacophony emanating from the gym, where the Lionesses (the championship girls' dance team) practice. Like the young lead character in "Water Lilies," Toni peers through the window at the older dancing girls. What does she see in them? A world she wants to enter? A world she is afraid to enter? Either way, when The Lionesses hold auditions for new members, Toni decides to try out.

As soon as she enters the world of girls, strange things start happening, and here is where "The Fits" really makes its impact. One by one, the girls succumb to a mysterious ailment with no apparent root cause. Their bodies flail, they stare up at the ceiling caught in a trance, they writhe on the floor in "fits." The community becomes alarmed and there's speculation that the water at the community center is contaminated. But nobody really knows for sure. The girls who succumb are all older than Toni by a couple of years. Is it a ritual of adolescence? Is it symbolic of "becoming a woman"? Are the "fits" ominous or are they an important rite of passage? Director Holmer, who also wrote the script, doesn't say. "The Fits" is not a film that is easily classified into a nice little genre box. There are sequences that are truly scary, other sequences that are lighthearted.

The attention-getting visual and aural style of the film is one of its strengths. Cinematographer Paul Yee films this strange story in a manner appropriate to the form of the narrative. The community center is filmed like an endlessly vast world, the white walls dazzling and disorienting, girls shrieking with joy up the ramps, the boys locked off in their own hermetically-sealed boxing-gym, the girls' empty locker room and bathroom stalls mysterious spaces where voices echo or the sound drops out. A little girl bounces a basketball against the gym wall, dwarfed by the space around her. Toni stands in the middle of the emptied-out swimming pool, staring at the emptiness of her once-familiar world. Toni and a friend try on their sparkly Lioness costumes and cavort through the community center after-hours, giggling and twirling through the darkness like glittering fairies. Any girl who hasn't had "the fits" yet wonders when her time will come, or why her time hasn't come yet. Girls who have been initiated into "the fits" compare notes: "What was yours like? Mine was like this." The score, by Danny Bensi and Saunder Jurriaans, adds to the sense of creepy dislocation, time standing still, or at least slowed down.

Toni's point of view is crucial in this, but her point of view is not named or spoken. She watches. She practices her dance moves (her awkwardness and commitment is touching). She pierces her own ears. She gets razzed by the boys for this, but it's good-natured razzing. A friend paints her nails gold. The symbols of traditional femininity. But she's still a little kid, and her ears get infected and she frantically chips off the nail polish. Maybe she's not ready to be an adolescent yet. (She changes in the bathroom stall to hide her body, but peeks out at the older girls, who smear on lip liner and murmur about boyfriends.)

What mysterious and powerful creatures are adolescent girls. It's a foreign landscape to Toni, intimidating and yet compelling. Maybe Toni, with her unblinking gaze, understands that "fits" are part of being a girl, and she's now ready to take that leap. It's not clear. Nor should it be. "The Fits" is extremely insightful about that perilous time in a girl's life when she is still a child but, because of her body's natural processes, won't be for much longer. Things like menstruation and breast development happen whether a young girl is ready for growing up or not. It can be traumatic because inside she is still a little kid. Toni is comfortable in the boys' world, and Royalty Hightower is totally believable as a young and competent athlete. She moves through the girls' world like a ghost, or maybe it's the Lionesses who are the ghosts. Whether she's ready or not, Toni is about to be a part of it.

It's refreshing to see a film so committed to its own rules and style (all on a micro budget); a film that doesn't compromise itself or its intentions. The mystery remains intact and the questions reverberate off the empty gym walls. Toni watches. What she sees and what she feels is up to the viewer to decide. "The Fits" inspires conversation. We need more films like it. 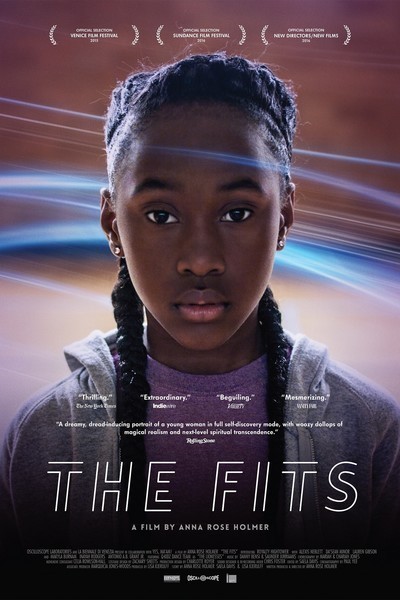