These are some of the not very good alternative titles I thought of while resisting the urge to bolt during “Love the Coopers.” The more curdled-than-cuddly holiday film already had offended this former copy editor even before I entered the theater. Its crime? The lack of punctuation in its name.

A third-grader would know there should be a comma after “Love” since, as the holly-jolly folly of a cliché-engorged opening montage confirms, it refers to the clan’s preferred salutation on their greeting cards that duly employs, yes, a comma. As it stands, it sounds like a command. To which the correct response would be a resounding ho-ho-NO!—exclamation point included.

Normally I would place most of the blame on director Jessie Nelson (“I Am Sam”) for delivering such a jumbled, toxic snow globe of a movie complete with a brewing storm, caustic quarreling and excessive caroling in an effort to undercut sentimentality. But I suspect screenwriter Steven Rogers ("Hope Floats," “Stepmom”), is more to blame, if only for overstuffing the plot. There are too many trite storytelling devices, such as a narrator a la “A Christmas Story” on top of flashbacks of past holiday memories with younger actors who barely look like their adult versions. That the voice belongs to Steve Martin doesn’t help a whit. There are too many characters to even attempt to care about. And there is too great of a reliance on music both yuletide and not (Sting, Nina Simone and Bob Dylan) to fill in the emotional blanks.

But at least Nelson, who tosses a cute kid or an adorable doggy into the proceedings like cheap tinsel whenever matters get too cynical, has managed to corral three Oscar winners and one recent nominee for her cast. They appear to reside in some sort of 21st-century Bedford Falls where it must be against the law to not smother your house or place of business with garish seasonal decorations as Santa Clauses gather en masse on the sidewalks like some North Pole edition of “West Side Story.”

Diane Keaton—who fared much better in the faintly similar 2005 dysfunctional-family holiday dramedy “The Family Stone”—is the matriarch, a Martha Stewart-type complete with festive apron who demands one more happy gathering with her extended family before she and husband John Goodman announce they are separating after 40 years. What is forcing them apart? Keaton is too wrapped up in their grown children’s lives and Goodman wants to finally take his long-postponed dream trip to Africa, with or without her.

Marisa Tomei shows up as Keaton’s stereotypically spinster sister who is filled with resentment, low self-esteem and struggling with a shoplifting problem. The trouble is that the vivacious Tomei, who is 50 to Keaton’s 69, is neither believable as her sibling nor as a spinster.

Alan Arkin, however, is not a bad fit as their father, whose attraction to Amanda Seyfried’s lonely diner waitress—who is 52 years younger than her co-star—is supposed to be poignant when it really is downright creepy, even if the mention of Charlie Chaplin’s attraction to a waifish blind girl in “City Lights” supposedly makes it OK. Meanwhile, the wonderful June Squibb is reduced to playing Aunt Fishy, an addled resident of an old folks home whose big scenes involve eating the roof of a gingerbread house and revealing her underpants as she did in “Nebraska.”

Others along for the ride include Ed Helms as Keaton and Goodman’s jobless son and father of three who is undergoing a divorce; Olivia Wilde as their unlucky-in-love playwright daughter who prefers to hang out at the airport bar tossing back dirty martinis than spending one extra minute with the folks; and Anthony Mackie, who provides diversity as well as subtlety as an reclusive police officer who catches Tomei in the act of stealing a brooch as a gift for her sister by hiding it in her mouth.

There is a long list of naughty and not very nice lapses in logic and good taste for the sake of being edgy, before we get to the fearsome feast where everyone either says the wrong thing, or shares unpleasant revelations until someone lands face down in a bowl full of mashed potatoes. Here are just a few examples:

*Is it funny that Helms’ angel-faced toddler daughter likes to repeat a phrase she heard her mom say to her dad: “You are such a dick!”?

*Is it amusing that Goodman has a habit of mangling lyrics of carols, such as singing “brown yon virgin” during “Silent Night”?

*How is it that Keaton can spend the whole day hanging out with Goodman and their granddaughter doing fun Christmas stuff, and yet she can instantly whip up a fantasy spread of massive platters of elaborate dishes and desserts without breaking a sweat?

*How is it proper that Helms allows his gawky teen son to make out with his girl crush in a hospital waiting area after a family member falls ill?

*And why does a character have to come out as gay in a way that feels rather awkward and unrealistic?

If there is any reason to watch all these shenanigans, it is the makeshift relationship that Wilde invents to impress her parents with a soon-to-be-deployed soldier (Jake Lacy, who was terrific in last year’s “Obvious Child” and scores again here). There is something sad and yet authentic about her lack of connection with others and in how Lacy’s sincere military man is able to break down her defenses, despite her obsessive need to debase his political and religious beliefs (Republican and Christian).

At least “Love the Coopers” has the nerve to even bring up the topic of faith in a mainstream and primarily secular holiday film. But it loses most of those points with its odd choice of turning outdoor snowmen, gingerbread men and chocolate figurines into a Greek chorus that comments on the action with their silent scowls.

Besides, as audiences leave they should provide plenty of disapproving reactions all on their own. 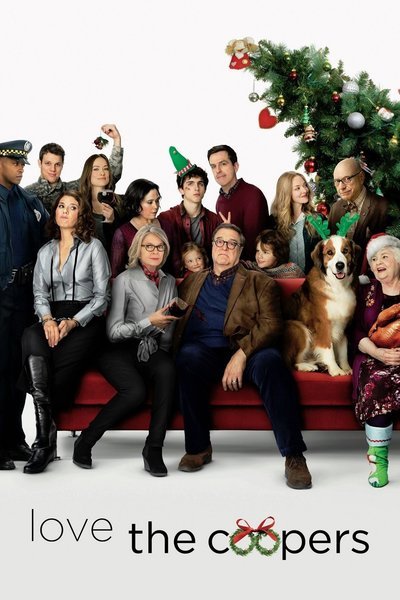