Ever since Martin Amis published his 1989 novel London Fields, most of its readers have said two things about it—that his trippy and oh-so-meta murder mystery meditation was one of the finest works of his entire career, and that it was written in such a specific and unique manner that it would be all but impossible to transform it into a film. Of course, this has not stopped people from attempting to bring it to the big screen over the years. But not even the likes of David Cronenberg or Michael Winterbottom—each of whom has had past success with films based on books deemed impossible to film with, respectively, “Naked Lunch” and “Tristram Shandy”—were able to figure out how to do it. Now, at long last, the film version of “London Fields” has finally emerged after a long delay—it began filming in 2013 and has been mired in legal difficulties ever since it was pulled from the 2015 Toronto International Film Festival at the last second—and if it does anything, it proves once and for all that it is a property that should have been left on the page. A boring and garish mess that even fans of the book will find nearly impossible to follow, this is easily the most embarrassing film with which Amis has ever been even vaguely connected.

Set in 1999, the film opens as Samson Young (Billy Bob Thornton), a blocked and terminally ill American author, arrives in London—which is itself teetering on the edge of anarchy for vaguely explained reasons—to stay in the luxurious apartment belonging to wildly successful writer Mark Aspery (Jason Issacs), who has taken his crummy New York hovel in exchange. At a local pub, he meets three people who will prove to have a great impact on his life and work over the next few weeks. The first is Keith Talent (Jim Sturgess), an obnoxious cab driver and would-be darts champion who spends his days drinking heavily, running petty scams and abusing his long-suffering wife (Cara Delevingne, who spends about as much time on screen as it took me to type her name). Next is Guy Clinch (Theo James), a blandly handsome upper-class type who feels trapped in his life with a cold and unfeeling wife (Jamie Alexander) and a vile creep of a young son (Craig Garner). Last, but certainly not least, is Nicola Six (Amber Heard), a femme fatale type who attracts the attentions of practically every man she comes across and claims to be clairvoyant as well.

This latter point is significant because Nicola specializes in seeing when people will die and that includes herself as well. She knows that she will die on her rapidly approaching 30th birthday (on Guy Fawkes Day, no less) and even the type of implement that will be used to do it. The only thing that has eluded her is the identity of her murderer but after the pub visit, she is convinced that one of the others will be the one. Rather than try to alter her fate, Nicola instead tries to assure that her killing will come off as planned by running concurrent scams on Keith and Guy—she uses her considerable wiles to spur Keith on to make it to a big darts championship where he will compete against Chick Purchase (Johnny Depp), who is both his greatest rival and the guy to whom he owes a lot of money while posing as a pure and innocent type to Guy in order to get thousands of pounds out of him that will supposedly go to a Burmese refugee by the name of Enola Gay and her son, known only as Little Boy. As for Samson, it turns out that Nicola lives in the flat right above his and he gets her to agree to let him follow her around during what are presumably her final days and use her death as grist for his next and presumably last novel.

“London Fields” more or less follows the parameters of the book, but the plot is one of the less important aspects of the source. What made the book so great was the way in which Amis told his story—a darkly funny meta-fictional construct in which the reader could never be sure that what they were reading was actually happening. Unfortunately, while director Matthew Cullen (the auteur of numerous Katy Perry videos) and screenwriter Robin Hanley have used large chunks of dialogue and narration taken straight from the novel, they never manage to find a cinematic equivalent to Amis’ authorial voice. The end result is a film that contains scenes that readers will recognize from the book, but which seem to have no dramatic or emotional relation to each.

The cast is almost as ill-served as the book. Heard is essentially asked to do two things—portray a character who can effortlessly move from one persona to another in order to get what she wants and model a lot of lingerie. Granted, the script is so formless and confused that the role would stymie any actress, but she just does not project the kind of mystery and allure that a character like hers needs. As her two rivals, Sturgess overacts monstrously as the loutish Keith while James is so nondescript that he barely makes any impression at all. Billy Bob Thornton, on the other hand, seems to have realized early on that this was going to be a stinker and just coasts through the proceedings with the minimal amount of energy required to keep him propped up. As for Depp, his cameo is yet another one of the self-consciously bizarro turns that has defined his career as of late but at least he gives the film a couple of sorely needed jolts of energy. (As for Depp and Heard, who made this film before beginning their short-lived marriage and eventual ugly split, they have one scene together that will leave most viewers thinking “Ewwww.”)

“London Fields” is a terrible movie but perhaps the worst thing about it is that it doesn’t even have the dignity to be an interesting terrible movie—the kind of jaw-dropping disaster like “Candy” or “Myra Breckenridge” that is so uniquely awful that it somehow generates a perverse sort of interest that keeps one watching. This, by comparison, is just a top-to-bottom dud that will enrage fans of the book and perplex those unfamiliar with it. There is no doubt a long and sad story of how such a great book became such a lousy movie. If/when that tale is told, I can almost guarantee it will probably be funnier, stranger and more outrageous than "London Fields" itself. 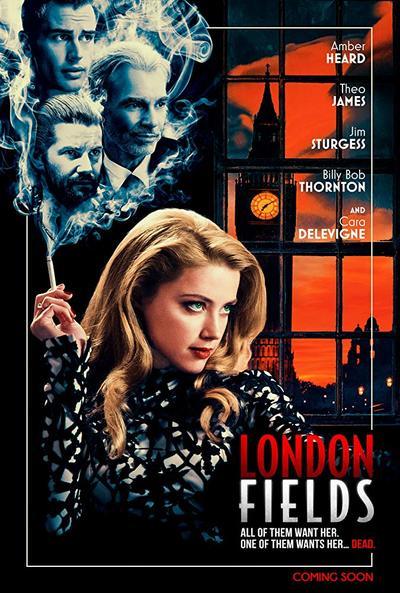 Rated R for sexual content/nudity, language throughout, some violence and drug use.