Rarely do I find a movie that is so appalling if not outright insulting to all of humanity (and particularly, in this case, womankind) that it gives me a stomach ache. I prefer popcorn over Tums, so I intentionally stayed away from "The Human Centipede" (1 and 2) since the plot descriptions alone were enough to make me queasy.

It’s true that "Scent of a Woman" gave me a nausea -inducing headache, but that was caused more by Al Pacino’s shouting (damn those obnoxious “Whoo-hahs”) than the actual story. And I came down with the flu during "The Fifth Element", but there wasn’t enough evidence that Chris Tucker’s outlandish Ruby Rhod caused my fever (besides, I would forgive Tucker even if he was behind my illness on the basis of his subdued wonderfulness in "Silver Linings Playbook").

But "Locker 13" really put me off the Cobb salad that I had intended to dine on at lunch. I actually was looking forward to sinking my teeth into a good old-fashioned anthology flick in the style of "The Twilight Zone" that might allow for some reflection upon life, one juicy chunk at a time. Turns out, it’s more of a "Don’t-Go Zone" type of movie.

It might have been a warning that this project that features four vignettes surrounded by a wrap-around tale was Kickstarter-funded, boasts no fewer than 21 producers at varying levels of blame and took a number of years to get off the ground.  But how bad could it be since its massive cast includes that cute Ricky Schroeder of "Silver Spoons", that sweet Tatyana Ali from "The Fresh Prince of Bel-Air", that funny Curtis Armstrong from "Revenge of the Nerds"–not to mention David Huddleston, as in THE Big Lebowski himself? There is even the "Baywatch"-able Krista Allen, who used to date George Clooney several model-actress moons ago.

How about amateurishly acted, illogically plotted, cruelly violent and needlessly sexist bad? Any film that starts in an Old West theme park and isn’t called "Westworld" immediately signals a problem. Especially since the cowpoke serving as our guide isn’t Yul Brynner or even Rod Serling, but a self-satisfied philosophizing supervisor played by Uncle Rico from "Napoleon Dynamite", who aims to teach a lesson in making the right choices to the new nighttime janitor, an ex-con named Skip (Jason Spisak). After going on a bit about the phrase, “Know thyself,”  Uncle Rico begins to bore Skip and the audience by spinning a quartet of yarns, all supposedly tied together by the presence of a locker bearing the number 13.

But what really draws the narratives together is a warped vision of the universe where men drive all the action and women are reduced to being on the sideline as either hookers, strippers, mistresses, gold diggers or victimized wives. The only female character shown in a less than demeaning way? Skip’s online tutor when he was in prison, who isn’t smart enough to know this scowling dude isn’t exactly dating material.

First up:  “Down and Out,” a washed-up boxer (Schroeder) becomes the unlucky owner of a pair of cursed gloves that causes him to win every fight not just with a knock-out, but by basically pummeling his opponent to death. The choice to not show us too much of the action inside the ring is probably a smart one, considering the vicious outcomes–along with the fact that Martin Scorsese did not direct this segment. But the only chill you will get watching how it all plays out is if you left your sweater at home.

Did I mention this is the best-told story of the bunch?

For No. 2, “The Byzantine Order,” we are suddenly thrust back to the early 1900s to witness the gathering of a Shrine-like club of lodge members preparing to initiate a new member. Amid much phony quaintness is the suggestion that something truly twisted and sadistic this way comes. Instead, it is something confusing and stupid, most notable for featuring a trombone-playing exotic dancer who stashes her baby in a giant cake–the one she uses to jump out of in her act. Huddleston at least returns to his Lebowski glory days as a grand poobah who bosses everyone while ensconced in a wheelchair.

The third vignette concerns a nervous mental patient who is considering a leap from a tall building onto the city streets and a carny-like fast talker who suddenly materializes nearby and claims to be a member of  a “Suicide Club,” in which bets are placed on those about to take their own lives. The fourth and most off-putting of the chapters, “The Author,” features a hit man with a horrendous Cuban accent who taunts and terrorizes three women chained to a wall to find out which one hired him to shoot a sleazy owner of a girly mag.

It all comes round again to the faux Old West, as we see whether Uncle Rico has gotten through to Skip in any way with his feeble fables. While the finale at least puts the notion of an evil locker to some practical use, it might have been better if the filmmakers simply stored all the copies of "Locker 13" inside the haunted contraption and threw away the key. 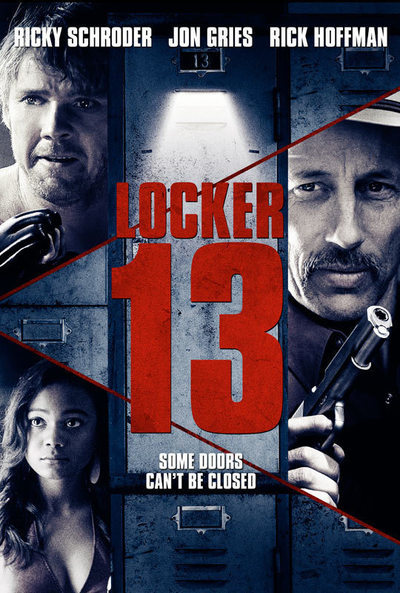