“I happen to agree with it 100 percent,” real estate developer and future president Donald Trump said in 2005 about the Supreme Court’s expansive ruling on eminent domain that year, in the case Kelo vs. New London. Speaking on Neil Cavuto’s Fox News program, Trump elaborated on his praise, not forgetting to make it at least a little bit about him: “Well, it’s sort of not a good one for me to say, because I noticed every article written about it said, ‘Will Donald Trump take over your home?’ sort of using me as the example. […]I happen to agree with it 100 percent, not that I would want to use it. But the fact is, if you have a person living in an area that’s not even necessarily a good area, and government, whether it’s local or whatever, government wants to build a tremendous economic development […and] move the person to a better place and yet create thousands upon thousands of jobs and beautification and lots of other things, I think it happens to be good.”

As the plaintiffs in the case tried to demonstrate, the case was never so much about a “for their own good” principle, with all the condescension that implies. That’s one of the more compelling features of the new movie, “Little Pink House,” a fictional portrait of Susette Kelo, leader in a legal fight to prevent New London from seizing and destroying her home the better to pursue a sweetheart tax-revenue-boosting development deal with pharmaceutical giant Pfizer.

Written and directed by Courtney Balaker, and based on a 2009 book by Jeff Benedict, “Little Pink House” begins like an indie character study. Susette, played by Catherine Keener, is going on her busy rounds as an EMT; in an ambulance ride, she reconnected with an old friend and that friend’s mother, who’s lying in a gurney. Soon she’s fixing up a little house she just moved into and painting it pink. It’s got a killer view of the river (which, yes, is called the Thames), although its proximity to a sewage treatment center is considered not ideal. Susette strikes up friendships with a local antiques dealer, who wants to be more than friends, and the owner of a less-than-prosperous local deli. Life is good, for a little bit.

In the meantime, though, Balaker intercuts what could very well be another movie, one in which characters are introduced with on-screen titles. Connecticut’s governor (never named in the movie but based on John G. Rowland) decides he wants to win New London in his next election and that to do so it’d be great to get some economic development in that depressed area. He picks local college president Charlotte Wells (Jeanne Tripplehorn), depicted as so uptight that she puts on makeup to go to bed, to be the point person for the until-now very dormant New London Development Corporation. Ms. Wells in turn lures Pfizer, on the verge of blowing up with Viagra, to have a look at a plot of land that abuts the Fort Trumbull neighborhood where Susette’s pink house it. There’s not enough space, an executive complains. Charlotte more or less asks him how much he wants. Then she backpedals with a scheme to deliver New London from squalor: vacate numerous houses and businesses to make room.

The story of this fight is fascinating, and the repercussions of this case are still being felt today. But the cinematic treatment of the story is confused. The movie often seems to have a hard time making up its mind whether it wants to be “The Insider” or “Mean Girls.” In the latter respect, its editing sets up Susette and Charlotte’s character in near-comic opposition. The down-to-earth working woman against the privileged, bubble-dwelling snob. But the film doesn’t make any hay out of the characters’ actual on-screen confrontations. And when faithfulness to actual events find Charlotte written out of the narrative, the parallel structure just falls apart.

This leaves the movie’s virtues almost entirely in the hands of Catherine Keener, who gives a strong, unshowy performance as Susette, a woman who considers being left alone in a home that one owns and has worked to keep a bedrock American value. If the movie doesn’t do much more to illuminate the issues it’s treating besides show characters fighting for them, it’s because it doesn’t really have to. The issues are as plain as a coat of pink paint on a house. 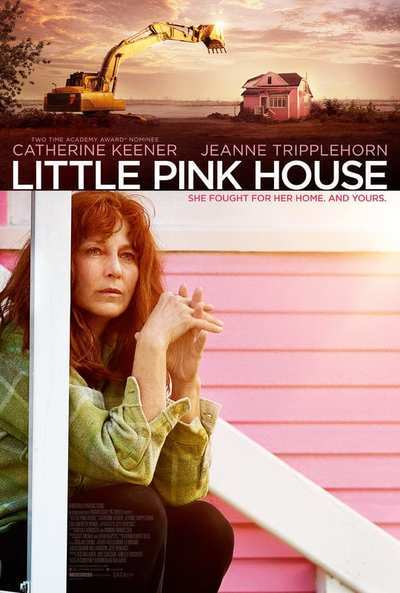