"Let the Corpses Tan" is, like the two previous features written and directed by Belgian filmmakers Hélène Cattet and Bruno Forzani, an arty tribute to violent, sensuous, over-the-top Euro-trash pulp fiction. And when I say "arty"—an admittedly loaded term, like "pretentious" and "low-brow"—I mean that Cattet and Forzani explicitly consider and present sex and gore as hyper-fetishized objects of desire for grubby, voyeuristic antiheroes. In these movies ("Amer," "The Strange Color of Your Body's Tears"), Cattet and Forzani use hyper-mannered close-ups, quick-cut editing, and cartoonishly exaggerated sound effects to accentuate what most intelligent viewers already know to be these characters' implicitly frustrating relationship: you'll never be adored by the things and the people you objectify in the exact way that you want to be loved by them.

The problem with "Let the Corpses Tan"—if you, like me, find this to be a problem—is that it is much more grounded in a straight-forward narrative than either of Cattet and Forzani's last two films. Cattet and Forzani tend to break down any given scene into a series of component actions—usually by using extreme close-ups to reduce props and body parts to animated objects—to deliver a dizzying adaptation of Jean-Pierre Bastid and Jean-Patrick Manchette's novel, which follows a prolonged stand-off between a trio of robbers, a man-eating painter, a novelist, and his mistress. Cattet and Forzani's approach is hardly invalid, but it is excessively applied here.

The plot is negligible: a gang of brutish thieves steal 250kg of gold ingots and try to lie low at a sunny summer villa belonging to their vamp-ish painter friend Luce (Elina Löwensohn). They soon become entangled with Luce's other guests, novelist Max (Marc Barbé), his mistress Melanie (Dorylia Calmel), and her son. Unfortunately, the gang's scheme is constantly interrupted by a litany of fussy stylistic tics:

- Hyper-active inter-titles that constantly announce what time it is, right down to the scene where we see the events of a single explosive minute from various characters' points-of-view, but only after we're told that it's 10:15pm, 10:15pm, 10:15pm, 10:15pm, over and over again.
- Thunderous background noises that speak much louder than any dialogue could, and insistently exaggerate the attractive qualities of objects—like the creak of leather jackets, the groan of wooden floorboards, or the clinking of gun-metal—until you're ready to jump into the movie screen, and separate the characters from their toys of choice.
- An unnervingly brisk pace; each just-so close-up (think Wes Anderson meets Brian De Palma) is over-edited to the point of distraction.

The resulting barrage of information—often filmed in static images—recalls the Ludovico Technique from "A Clockwork Orange." Some individual images and ideas will probably stick in my mind, like Löwensohn's face as she creeps behind an open doorway. But I found it impossible to care about these characters, their behavior, or anything else beyond their surface meaning.

The excessive, assaultive nature of "Let the Corpses Tan" is almost certainly Cattet and Forzani's point, as we see in fitfully entertaining, completely overwrought nightmare interludes. A woman, presented in silhouette, is ritualistically showered in gold dust. She is coveted and watched by a crowd of silent male on-lookers, one of whom approaches her. They try to tame her—with whips, with their hands, with their gaze—but she resists. She even taunts them back, especially during one kitschy, quasi-erotic sequence involving a bare breast and an overtaxed champagne bottle. These dream sequences are stirring on an image-to-image basis, but are underwhelming when heaped on top of each  other in scene-length sequences. It's the cinematic equivalent of a music album that's comprised of nothing but singles: great in parts, but ultimately rather tiresome.

Still, Cattet and Forzani excel at finding the sensuality in violence. Just look at the scene where Melanie loses her dress in slow-motion as an automatic pistol methodically destroys every stitch of her clothing (without physically harming her). Each bullet that's pumped out and at her is visualized by a microseconds-long blackout; in a few moments, Calmel is totally naked. It's a bracing sequence, one that you'll either love or hate depending on your taste for such a dazzling, logic-resistent display of sleazy iconography. I can't stand "Let the Corpses Tan" because its images speak loudly, quickly, and monotonously. And while I often enjoy loud, meaningless displays of stylistic excess, this one quickly wore me down. 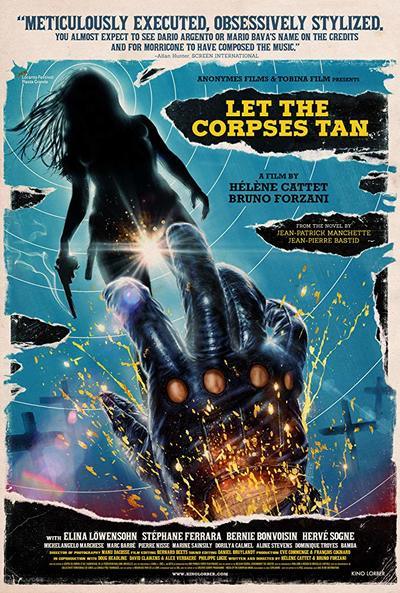 Bernie Bonvoisin as The brute

Hervé Sogne as The policeman

Marine Sainsily as The nanny

Marilyn Jess as The policewoman