The Strange Color of Your Body's Tears

Characterizing Belgian co-directors/writers Helene Cattet and Bruno Forzani's style is tricky since they've only made two features to date. Both "Amer" and "The Strange Color of Your Body's Tears" are visually overpowering homages to Italian gialli from the '60s and '70s, seedy crime/detective stories with a focus on psychological realism and sexual perversion. Cattet and Forzani's gialli feel more abstract than films by masters like Mario Bava, Dario Argento, and Sergio Martino in that their films are not narrative-centric. "The Strange Color of Your Body's Tears," a mystery about a deranged man's search for his missing wife, is largely made up of elliptical flashbacks and dream sequences. It's a confrontational fever dream film told from constantly shifting perspectives, and a chilly, dizzying trip into a genre defined by violently conflicting emotions.

In "The Strange Color of Your Body's Tears," we initially see the world through the eyes of Dan Kristensen (Klaus Tange). He drinks to excess, but only after he discovers that his wife Edwige (Ursula Bedena) has disappeared. It's unclear how he knows this is true given that he's just gotten home from a business trip. But Dan's grip on the film's reality is flimsy at best. Everyone that he meets in his building can suspiciously relate to his plight, including the pushy detective whose wife is also missing, and the grieving 7th floor neighbor whose husband vanished. These supporting characters aren't just supporting characters. They're like Dan in that they're united in absence, which makes their bond more than a little uneasy.

To be perfectly honest, you don't really learn much about these characters beyond scattered images of mysterious goings-on that have traumatized them, particularly disembodied body parts: eyes, lips, rears, and uh, other unmentionables. Cattet and Forzani aren't really interested in telling a story, but rather relating the texture and sounds of the people and things that haunt Dan's building, an Art Nouveau apartment with bulging walls, lurid stained glass fixtures, and vertigo-inducing stairwells.

Advertisement
To enjoy "The Strange Color of Your Body's Tears," you have to treat Dan as an impersonal construct, one of a handful of keys that unlock the images that assault you throughout the film. This makes watching the film paradoxically more disorienting than "Amer," a giallo homage that's even less narrative-dependent than "Color" is. One story is being told in "The Strange Color of Your Body's Tears," but it's told by everyone and everything around Dan. He sort of just passively receives information, even during the film's claustrophobically-lensed, extreme-close-up-heavy sex scenes.

Realistically, these sex scenes, which are filmed with even an even greater need to accent vagina-like head wounds, and straight razor blades protruding out of sundry orifices, are the best test of whether or not you'll like "The Strange Color of Your Body's Tears." They're blunt, and immediately effective if you buy into Freudian fears of absence, and passivity. They're arty and vain if you think they're going to highlight more complex power dynamics. This is the kind of movie that's bound to split up moviegoers. No one will dispute the film's dazzling look, or complex sound design. But beyond that, the film's merits are entirely dependent on how much you either want to trace the similarities between the film's narrative episodes, or just want to zone out, and get lost. I encourage anyone that's interested in seeing this film to bring a friend you know you often disagree with—the Gene to your Roger. Your heated post-screening argument just might make the film one of your favorites of the year (go easy on the name-calling though).

I found "The Strange Color of Your Body's Tears" to be mesmerizing because it's a weird mix of De Palma-like precision, and Argento-esque immediacy. Which is to say: it feels like a formally accomplished experiment that doesn't need to add up to much to be really impressive. There's so much information swimming on the film's top-heavy surface, especially speculation about how guilt and voyeurism inevitably go hand-in-hand, that the plot's various gaps can be filled in a couple of different ways each time you rewatch it. Cattet and Forzani's confidence as image-makers forces interest in where they take Dan to next, even if it's ultimately nowhere more memorable than a bracing shot or two (the mirror-sex scene is especially memorable). I've deliberately kept the film's plot and many of its details a secret for that reason. "The Strange Color of Your Body's Tears" is a movie you really should see and judge for yourself since so much of its charms are visceral. It's a pleasure to behold because it doesn't try to be anything more than a beautiful, troubling trip. 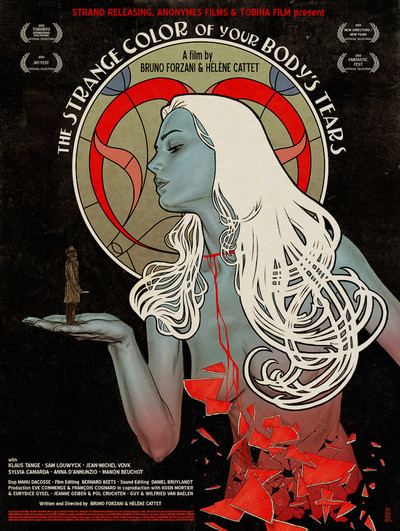