Let us use the arrival of "Le Week-End"—a wistfully rendered yet often barbed account of longtime marrieds who find themselves dissatisfied and drifting apart while on an anniversary trip to Paris—to salute a filmmaker who rarely gets the credit he deserves: Roger Michell.

At 57, Michell is the youngest and most unsung of a trio of distinctively British directors whose film work began receiving global attention in the '90s. Mike Newell made his presence known with 1994's "Four Weddings and a Funeral", scoring Oscar nods for best picture and screenplay. John Madden topped that feat with 1998's "Shakespeare in Love", winning seven Oscars including best picture. Michell's breakout arrived in 1999, when his romantic comedy "Notting Hill" turned into one of the highest-grossing British films of all time with a worldwide box office of $364 million. His involvement, however, was somewhat overshadowed by the sight of Julia Roberts playing a version of herself as a renowned actress opposite a smitten Hugh Grant. While there have been other hits among Michell's 11 films—his first, an adaptation of Jane Austen's "Persuasion" in 1995, was a well-received TV movie released in theaters overseas—there also have been notable misses.

Most recently, his "Hyde Park on Hudson" was done in by the unpalatable displays of FDR's extracurricular love life. But the biopic at least succeeded on a smaller scale as an intriguing private portrait of a public marriage. Specifically, that of an insecure King George VI (Samuel West), the stutterer who was the subject of "The King's Speech", and his nagging wife (Olivia Colman), the mother of Queen Elizabeth II, as they visited the president's upstate New York retreat as World War II threatens. That royal gem of a union, as well as the interplay between West's King and Bill Murray's FDR, managed to save the show.

As exemplified by that effort as well as 2002's "Changing Lanes", a road-rage drama, and 2006's "Venus", about an aged actor who lusts after an insolent young woman, Michell is often at his best when dealing with characters who find themselves under stress or attempting to seek common ground with an onscreen counterpart. When Michell is on his game, as he definitely is with "Le Week-End", he unearths small, invaluable and even profound truths about the human condition that are often as inspiring as they are devastating.

Michell also has great taste in collaborators. "Le Week-End" marks his fourth pairing with screenwriter Hanif Kureishi—they managed to earn the late Peter O'Toole his eighth and final shot at an acting Oscar with "Venus". Similarly, they find themselves working alongside two durable acting pros with notable depth and presence, owlishly avuncular Jim Broadbent, 64, who won an Oscar as the caretaker husband in "Iris", and bewitchingly flinty Lindsay Duncan, 63, who was fabulous as the eccentric mum in "About Time". Simple stereotypes are not what these two performers do.

Yet their domestic situation will be recognizable to anyone who has savored the comfortable familiarity that comes with a decades-long union but also has resented its predictability. With performers this seasoned, all it takes is the opening scene aboard a train to see where this journey to re-invigorate 30-year marriage is going. Meg has her nose in a book while trying to ignore Nick, who is checking over itineraries and other travel material while worrying about where he stashed their converted Euros.

Duncan's likeness to French actress Julie Delpy isn't the only reason that it is easy to think of "Le Week-End" as a twilight time version of Richard Linklater's "Before Midnight" and its two romantic predecessors. They all offer long, often intense verbal exchanges between partners in a relationship against a glorious scenic backdrop.

Once the couple arrives at their destination, the conversation initially turns comedic when Meg takes one look at the depressing cut-rate dump of a room that Nick has booked and observes with disgust, "It's beige!'' Off they go in cab to a high-end hotel complete with Eiffel Tower view and a fully stocked pricey mini-bar. Told that Tony Blair once stayed in their suite, Nick opines, "As long as they changed the sheets."

Where she is bold, decisive, impractical and reckless, he is fussy, clumsy, fretful and tentative. He wants to use this occasion to finally nail down what tiles to put in their redone bathroom. She hungers for fine food, great wine and excitement beyond the everyday norm.

Given they are both academics—Nick is a philosophy professor, no less—the talk gushes forth as they visit picturesque museums, bistros, book shops, churches and cemeteries. They argue about their wastrel son who wants to move back home. Nick reveals he is about to be pushed into early retirement at work. Meg tops that news with the admission that she has considered spending her golden years without him. As hurtful as she can be and as vulnerable as he can be, Broadbent and Duncan make sure that flickers of love and affection ignite now and then in between spats over having to use the same toothbrush.

Sex, of course, rears its head. And rather bluntly, too. As Nick, who is clearly hoping to get lucky on this jaunt, notes, "For the last five, 10 years, your vagina has become sort of a closed book." He then suggests taking their lovemaking "into another dimension," even suggesting they pretend to be other people.

Counters Meg, "I might do it for you later if you stay awake." She teases him in cruel fashion until he retreats, listening to Bob Dylan in boxer shorts with his ear buds in, and guzzling alcohol. They do make fine co-conspirators, however, as Meg pulls off a scheme to skip out of paying a steep bill at a restaurant and they passionately kiss on the street in celebration.

The climax of the movie arrives when Nick runs into a pal, a well-off American author named Morgan who now lives in Paris with his new pregnant wife. As played by Jeff Goldblum at his most grand-gesturing Goldblum-iest, his entrance into the movie is akin to throwing a lit Roman candle into a room. It's at a dinner party in honor of Morgan's latest tome that Nick and Meg go off on their own little adventures of self-discovery, and leave perhaps with a renewed commitment. Or maybe not. In any case, the final images suggested by a Godard movie will put a smile on your face and at least provide hope. 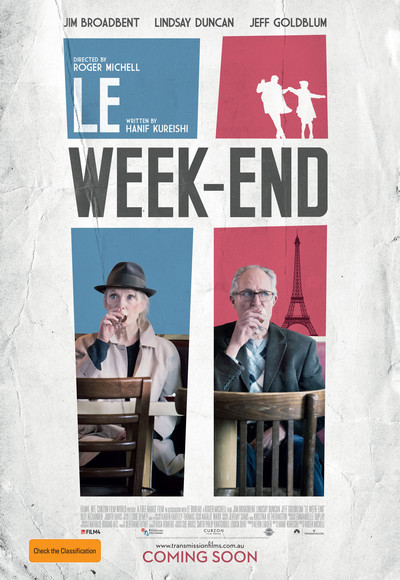