Richard Linklater's trilogy comprised of "Before Sunrise," "Before Sunset" and "Before Midnight" is Michael Apted's "Up" documentary series for love-stricken cinephiles, returning to the story of Jesse (Hawke) and Celine (Delpy) every nine years. Linklater introduced us to the couple when they were 23 years old and had smooth and youthful faces full of dreams and hopes; it returned to find them slightly older and wiser at 32. In "Before Midnight," they're 41. They have wrinkles and seem tired and worried, yelling at their children to "not go too far" while swimming in the sea.

Written by Linklater, Hawke and Delpy, "Before Midnight" is economical from the start. In a single camera movement, it reveals what has happened to Jesse and Celine since the last time we saw them in her apartment in Paris. Now they're the married parents of small twins, in Greece for the summer holidays. After taking his son from his first marriage to the airport, Jesse dives into a small crisis, worrying that he is an absent father and triggering a series of discussions with Celine. This time, however, the film also includes scenes that involve Jesse and Celine talking to younger and older couples, offering different views on love, marriage and romance.

Like its predecessors, "Before Midnight" is made up of very long takes. These allow conversations to flow with a naturalness that brings us closer to the characters and highlights the effect of age on the main actors. Ethan Hawke still displays the playfulness of his past incarnations, but counterbalanced by the weight of time; he has more lines in his face, and a voice made hoarse by age and cigarettes.  Julie Delpy has wrinkles and has gained a bit of weight, which she displays with seeming confidence and comfort; the beautiful girl has matured into an even more beautiful woman. In the past, Jesse and Celine talked about the future, their ambitions, fears and dreams. Now they focus on the mistakes of the past and on their present problems, and refer to their future only as a hypothetical scenario in which they would attend their partner’s funeral.

And therein lies the genius of "Before Midnight": it would be easy to build a romanticized third chapter to serve as the climax for the previous two, but Linklater, Delpy and Hawke choose instead to look at Jesse and Celine as a mature couple. The film offers an appropriate and natural view on the experience of a consummated love. In the second movie, "Before Sunset," the couple met and rekindled their romance. This time they possess each other with a familiarity created by coexistence. The mutual idealization of the past has been replaced by comfort in each other’s presence — and also with an underlying, perfectly understandable irritation. Before, they could only guess what was going on in each other's minds. Now Jesse and Celine have a PhD in Celine and Jesse, respectively. They can be lethal in discussion because they know exactly where to hit; which old wound to squeeze; which sour memory of the past to dredge up, and when.

Linklater and his actors expose small fissures with an admirable subtlety. As it happens in every relationship that's endured for years, Celine and Jesse have accumulated countless shared memories, hurts and fights. They can instantly recognize the subtext of the most trivial comments made to each other, and use their knowledge of one another to fan a spark of hostility into a bonfire. A single remark made to appease one partner could accidentally awaken resentments that were assumed dead or forgotten. In one scene, Celine makes a joke that is silly on its surface but has a cruel subtext; seconds later, she glances at Jesse to assess the effect of the hit.

Although they have built their relationship from long talks, the two recognize here they haven’t been really talking to each other for years, because they've been too busy discussing the problems of a grown-up couple with kids. When Celine asks Jesse if he would invite her to get off the train if they had met right this instant, his hesitation reveals not his doubt about the love he felt and still feels for her, but his difficulty in re-imagining his wife as an idealized, perfect muse.

Which isn't to say that the enchanting young lovers of "Before Sunrise" and "Before Sunset" have been reduced to embittered middle-aged squabblers. Those charmers are still there; you just have to squint to see them.  "Before Midnight" is enchanting because it lets us recognize the same Jesse and Celine who impulsively got off a train in Vienna 18 years ago. Still able to laugh, play with, and surprise each other, they are no more or less admirable and sweet than when they were in their twenties and thirties. They're just less naive.

Because Linklater, Delpy and Hawke  have together accumulated almost sixty years of life experience together, their script wisely refuses to take sides. When Jesse and Celine talk or argue, we're able to understand both points of view. Yes, Celine sometimes seem to be more impatient, but this does not automatically make Jesse right . And in Celine's defense, it’s not easy have a serious conversation when your husband insists on trying to defuse any sign of tension by constantly making jokes, many of which are as cruel as they are amusing.

"Before Midnight" is moving because it acknowledges that even love stories that began as beautifully as Jesse and Celine's must still endure the wear and tear of real life. Perhaps the story of the survival or the collapse of that love story over time is the definitive fable of love. It exposes "happily ever after" as what it is: a sweet but absurd fantasy.
Advertisement 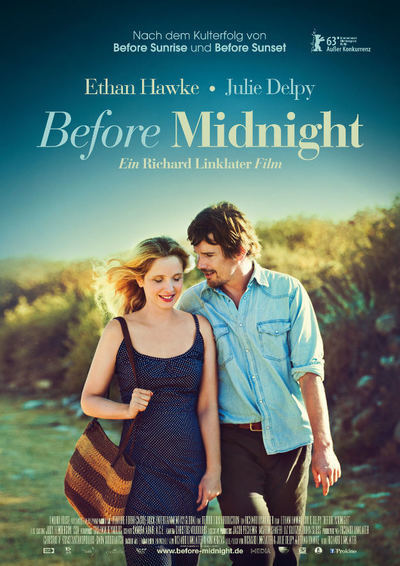