Sean Hayes stars as the frumpy, stunted woman and co-wrote the script that follows the title character as she stumbles out of her self-absorbed shell and into the harsh daylight of the real world. Theoretically, Hayes feels affection for Susan, as do co-writers Carrie Aizley and Darlene Hunt and director Nick Peet. The depiction of Susan’s sad daily existence is certainly a vivid one, as she hits snooze on her alarm at 10 a.m. before cutting out magazine images all afternoon for her collaging hobby. (Since she’s chronically unemployed because she doesn’t want to look for a job, she can’t afford to buy magazines, so she steals them out of her neighbors’ mailboxes.) As she drives around town, going nowhere in particular, she’s always blasting some upbeat, early ‘80s tune like “Head Over Heels” by The Go-Go’s or “Spaceage Love Song” by A Flock of Seagulls, the music of her youth suggesting she’s still stuck there.

But “Lazy Susan” also wallows in the Wisconsin kitsch that defines her and her family’s lives—the tchotchke-cluttered living rooms, the hideously floral fashion sense, the “I (Heart) Quilting” bumper sticker on the back of her beat-up, compact car. Hayes, the veteran comedian, obviously has taken great care in crafting Susan’s specific characteristics—the dismissive mannerisms that belie her insecurity, the absent-minded way she twiddles her hair when she’s nervous. The way the “Will & Grace” star dials down his typically high-energy tone is intriguing. And yet it’s hard to shake the sensation that the film wants us to gawk at Susan for being so pathetic, so unmotivated, such a hopeless case in general.

Her family can’t stand her and is tired of her freeloading. That includes her mom (Margo Martindale, who usually improves every film she’s in), who makes snide asides about how Susan will never give her a grandchild, and her younger brother, Cameron (Kiel Kennedy), a smugly superior physician’s assistant who enjoys a comfortable life with his wife and daughter. She has exactly one true friend, the harried wife and mother of three Corrin (co-writer Aizley), but their bond feels more like a narrative concoction than a believable, organic connection. And she has a longtime frenemy in Allison Janney’s character, a Kmart employee named Velvet with whom she regularly engages in an amusing game of passive-aggressive one-upmanship.

When a man finally pays attention to Susan and seems to love her for who she really is—Jim Rash’s Phil, the flirtatious and mustachioed owner of the local indoor trampoline park—it seems too good to be true. “Hey. Hey! Do not apologize for being adorable,” he insists after she burps during dinner. But does he really like her? Does the movie?

Pulling off this kind of sly, arch tone is really tricky. Writing a bunch of characters who are awful human beings and wanting us to find them interesting enough to care about them—and even spend time with them—requires a balancing act that’s hard to accomplish. “Lazy Susan” features the selfishness of “Seinfeld” and the social awkwardness of “Curb Your Enthusiasm” as well as the emotional immaturity of “Napoleon Dynamite” and the vivid send-up of suburban schlock we’ve seen in far more daring fare like the work of John Waters and last year’s deliriously weird indie “Greener Grass.” But it never quite works on its own. What’s crucial at the core is creating a character who feels like a real human being; Susan is more of a collection of quirks and bad choices. There just isn’t much to her. And the novelty alone of seeing Hayes play a woman is not enough to recommend this, although he does offer sporadic glimmers of vulnerability and humanity.

About an hour in, Susan asks during a remorseful phone call with Corrin, “Was I always like this?” Maybe. But the change that occurs, suggesting she might not be “like this” forever, feels more like a last-minute plot contrivance than a true transformation. 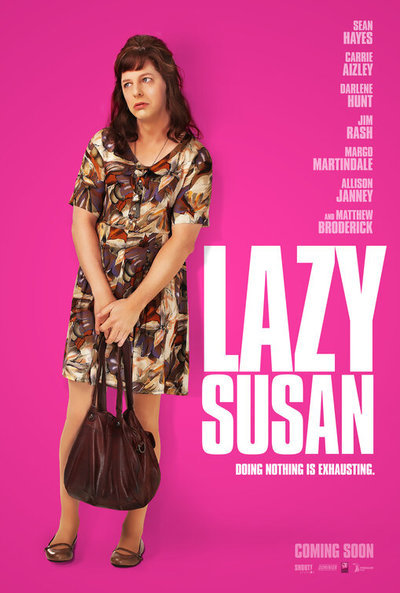