There's a scene in "Greener Grass," written and directed by Jocelyn DeBoer and Dawn Luebbe (who also co-star), where four families in golf carts sit at a four-way intersection. Everyone gestures at everybody else: "You go," "Oh, no, you go, I insist..." And so they sit at the intersection forever, smiles frozen on their faces, in a standoff of psychotic politeness. If you're at a four-way intersection, someone has to go first, someone has to allow themselves to be waved on through. In "Greener Grass," nobody dares.

DeBoer and Luebbe have created a psychotic suburban world where surface conformity is all, where everyone strives to look and be the same. The smiling faces perch on top of roiling emotions, not even necessarily anti-social emotions, just regular ones, like need, loss, pain. "Keeping up with the Joneses" is pushed to its most surreal extreme. Everyone in the town has braces. Everyone dresses the same, in pinks and light blues and light purples. Everyone drives golf carts. It's like they live in a mini village placed on a country club golf course somewhere.

The golf cart scene is an excellent example of what "Greener Grass" is attacking, and it's a sharp and subversive critique: it would be great to live in a more civil world, but too much civility leads to golf carts stalled at a four-way intersection. In another scene, when two meals end up on the ground after a collision between two waiters, the patrons hasten to eat the food off the floor. To say, "Please bring me another meal" would just not be done. Every single interaction in "Greener Grass" is "competitive," but it's competition tamped down by friendly beaming smiles. These people live in an agony of one-upmanship.

"Greener Grass" starts out strong and strange in the first scene. Lisa (Luebbe) and Jill (DeBoer) sit in a group of parents on a blazing sunny day, watching their kids play soccer. Both women are immaculately dressed and made up, braces on their teeth. Jill holds a newborn baby and Lisa compliments the baby on being "cute." Jill immediately hands the baby over to Lisa. Nobody seems to find this strange, not even Jill's husband (Beck Bennett). Lisa wanted the baby, and so it's polite to hand it over, it would be selfish to hang onto it. Later on, a neighbor (Mary Holland) expresses resentment that Jill didn't give the baby to her. Jill clearly has mixed feelings about what she has done, and yet "mixed feelings" are not allowed in the world of "Greener Grass." Jill's remaining son (Julian Hilliard) is a handful, a bedwetter and a perceptive observer. His surprising transformation is matched by Jill's total personality-disintegration.

Both DeBoer and Luebbe have performed with the improv comedy troupe Upright Citizens Brigade for over a decade. They bring that experience to their creation of this alternate universe, an unholy mix of "Blue Velvet," "Invasion of the Body Snatchers," and "The Stepford Wives." The characters in "Greener Grass" watch a lot of television and DeBoer and Luebbe have a lot of fun creating these alternate-history shows, fake commercials, fake reality shows and soap operas. "Greener Grass" displays its sketch comedy origins, and sometimes the "bits" stand out as not fitting altogether properly, maybe not as fleshed out as they should be. This is a very unsettling film, with a color palette that manages to be blazing-vivid and dreary-muted at the same time, as though it's all a regurgitated idea of an already-regurgitated idea. (That idea of regurgitation is made explicit in one of the fake television commercials.)

There are very funny details throughout. Pay close attention to the production design. The houses all look like toy houses, with interchangeable decor. People are just "playing house," they don't actually live there. In the grocery store, a sign is placed in a prominent position: "Not responsible for stolen lives." In one surreal moment, Jill and Lisa make out with each others' husbands, not even realizing their mistake. "Greener Grass" feels a little bit like a comedy sketch drawn out past its capabilities, but the film's target is always clear.

Like all good satires, "Greener Grass" trucks in exaggeration. Anyone "getting ahead" of anyone else is looked on with suspicion. Personal relationships have a generic quality because if you say you're "best friends" with someone, someone else might feel left out. Being "unselfish" can be a competition, especially when done performatively. In the leveling world of "Greener Grass," "standing out" is terrifying. It's Tall Poppy Syndrome on amphetamines. Even as Jill deteriorates, there's no sense here of a possible escape to another place where things are different. In "Greener Grass," Sylvia Plath's suffocating "bell jar" covers the whole world. 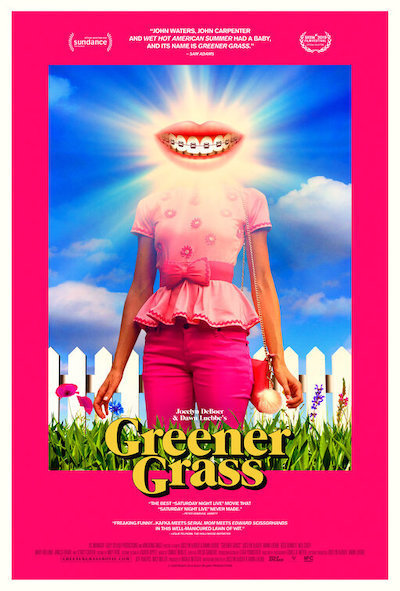